I have implemented a "Capacitive transformerless power supply" to control a microcontroller-based circuit that contains capacitive touch sensors, and I had an "AC polarity problem"

Surprisingly, the circuit behavior became affected by the polarity of the input AC (Line & Neutral), such that:

I have no idea how could the AC polarity affects the behavior of the supplied circuit?

Is there any reasonable explanation?

This is the schematic of the Capacitive power supply circuit I implemented:

Note that, the ground symbol in the circuit indicates the common point in the DC part, the AC source is only 2 pins (Line & Neutral) 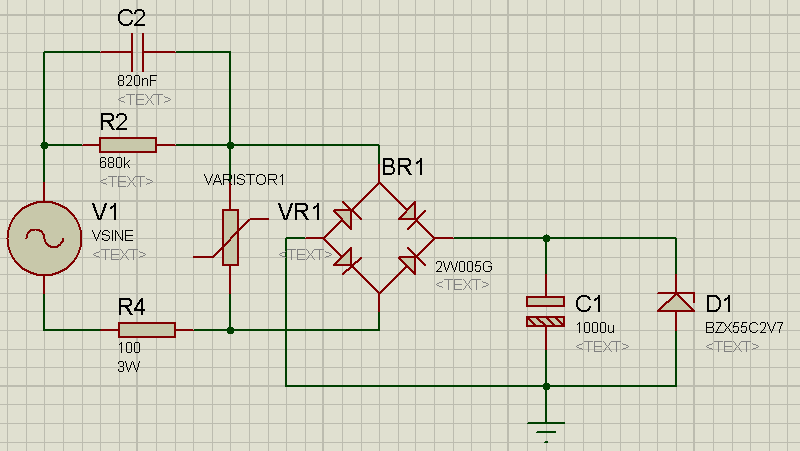 You appear to be in Egypt. As far as I know the electrical system there (and in Europe) uses either a two-pin ungrounded or Schuko grounded plug. One pin is "hot" (roughly 240VAC wrt earth) and the other is "neutral" (roughly 0VAC wrt earth). It's not clear to me what the ground symbol in your schematic is intended to mean- an earthed connection or simply a common point in your circuit. I'll assume it's the latter since the power supply would more-or-less explode (R4 and likely the bridge would fry) if the point shown as grounded was earthed and the plug connected the 'wrong' way.

If the common in your circuit is connected to the 'hot' then the result is similar to attaching the person to the hot (240VAC wrt ground) with the circuit grounded.

This is potentially an extremely dangerous situation- if the person comes into direct contact with 240VAC hot and there is another path to earth (say they touch a water tap), then they could easily die.

I strongly suggest that you use a galvanically isolated wall-wart supply, approved and from a reputable manufacturer (people have died from cheap crappy ones- but even the worst failed one is no worse than your circuit). You may still run into issues with 'polarity' because of the Y capacitor internal to the supply, but at least it won't result in unnecessary corpses.