I have something similar to this simplified following block diagram on Simulink. It looks rather messy.

I want to replace a 3-point summing block with a function block, while keeping the same output. 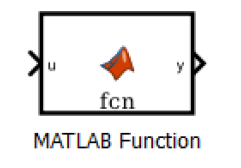 First I started by placing the code inside the function block:

However I was greeted with an error saying that Simulink does not support code generation.

"The 'tf' class does not support code generation."

I then came across a similar problem here: https://nl.mathworks.com/matlabcentral/answers/74770-is-there-any-way-to-disable-code-generation-in-simulink

I am trying to implement an extrinsic function or'wrapper function' with some difficulty. I created a new script called myWrapper.m, containing the same code:

and the MATLAB Function edited to:

The last code above is syntactically incorrect and I am at a loss on how it should be done. MATLAB automaticaly corrects the above code to:

which is not what I want.

Any tips and/or suggestions on how this could be done would be appreciated.

A similar question was asked on the MathWorks forum here, two years ago, with no response.

I was going about tackling this problem completely wrong. In order to replace the summing block, one must NOT remove the Transfer Function blocks which feed into the summing block and add them inside the script.

A MATLAB Function does not support code generation (and rightly so) such that a transfer function may be implemented inside it. That is why the blocks simply feed into the MATLAB Function as follows.

The script would very simply be: