I am involved with a 4H project looking to take some weight measurements with bee hives and am trying to figure out some 3-wire load sensors to do just that.

Because of this, I was told each 3-wire load sensor represents 1/2 of a Wheatstone bridge (each sensor containing two 1k resistance legs).

I can get my head around the single wheatstone application but I'm confused how a scale would work when made from two wheatstone bridges. My question is, if this is so, why would a scale require two Wheatstone bridges (remember, all four 3-wire sensors came from one bathroom scale)? 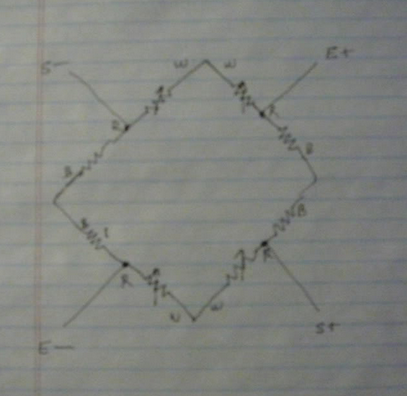 Wire all four sensors in a big ring with maximum resistance, matching colors and initially ignoring the center tap wires. Choose two opposite center taps as E+ and E-, and the remaining two center taps as S+,S-. Put the excitation voltage on the E+/E- from the diagram above and read a force-sensitive voltage difference across S+/S-.

See https://electronics.stackexchange.com/a/75717/30711 for a good schematic and Arduino Leonardo + 3 wire Load Cells + INA125P – Analog Signal Bounce / Noise for a wiring diagram of the colored wires combining into a wheatstone bridge.

Edit: Actually, I am uncertain if OP's three wire load cells have only one active strain gauge as in Mongo's diagram. If they are like the 50kg load cell from SparkFun's https://www.sparkfun.com/products/10245 or Ebay's http://www.ebay.com/itm/4pcs-Body-Load-Scale-Weighing-Sensor-Resistance-Strain-Half-bridge-Sensors-50kg-/251873576571 they mught have a compression and tension gage both on the top surface. The Ebay site has a diagram like: 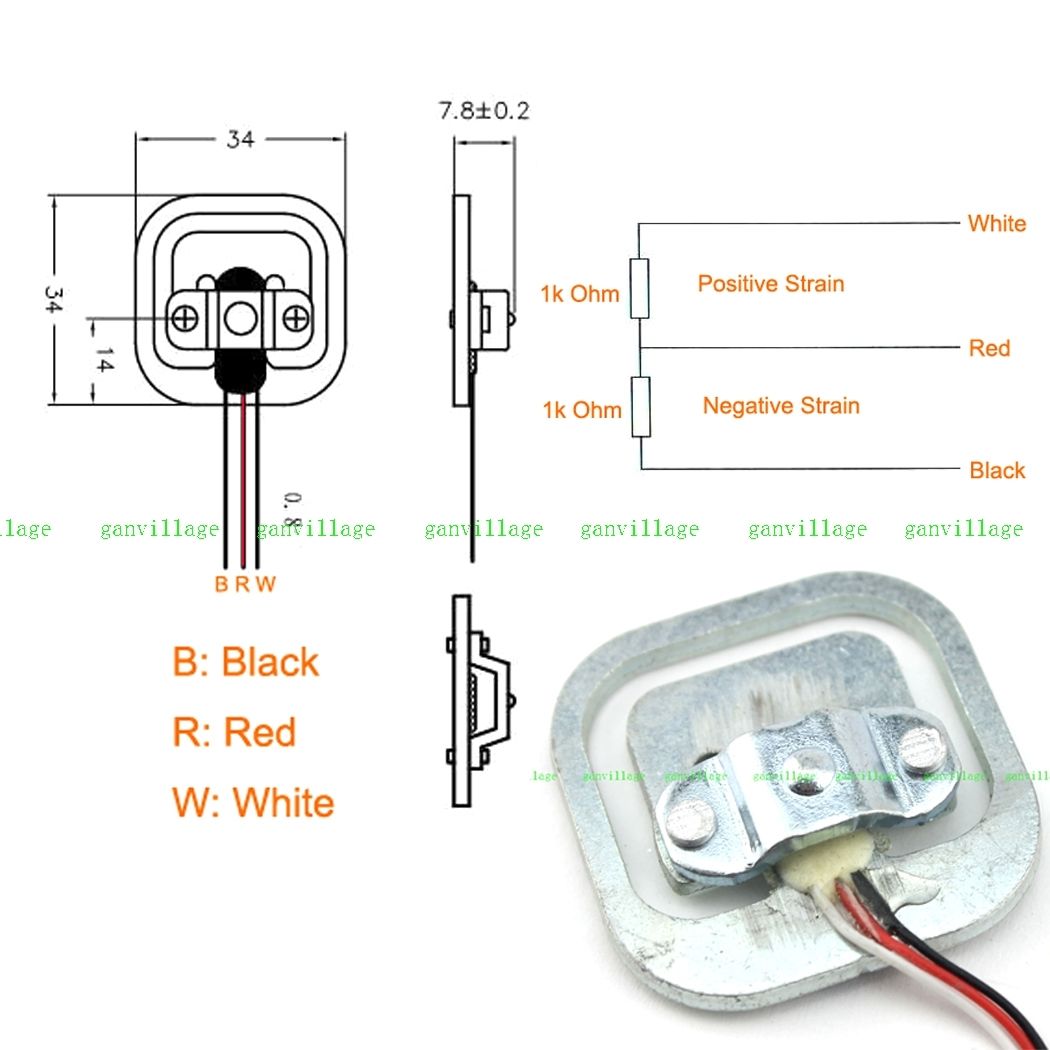 ... which indicates a positive strain gauge on the red-white, and a negative strain on the red-black. (note that the coloring order in this diagram does not match the coloring order in this picture. I have a similar gauge with blue-red-black colors, and the positive strain gauge is the right pair, negative on the left.) The gauged surface on the center bar between the face-to-face coupled 'E's in the sensor should act like a parallel bar and has portions under compression and under tension, rather than purely under tension. In cross-section, the gauged bar in the center is sort of the cross-piece in a Z-shaped spring. In this case, the strains oppose each other, and, if manufactured well, the reduction of resistance in the negative strain portion will offset the increase in resistance in the positive strain portion and the total white-black resistance should be constant. One still needs to set up the bridge so that the voltage dividers move in opposite directions with added load, and 4 devices wired in a white-to-white and black-to-black loop should work as above.

Here's a schematic with gauges 1-4 as G1 G2, G3, G4 per the above specs, applying an excitation on the G1 and G3 reds, and reading the signals off the G2 and G4 reds. The G4 gauge is loaded a bit with some positive strain increasing the G4+ resistance, and some negative strain reducing the G4- resistance. Ideally, loading G4 with 25kg would produce 0.5mV/V times its 2.5V excitation voltage, producing 1.250mV across Sig+/Sig-, and stretching R8 to be 1001 ohms and compressing R7 to 999 ohms as shown. One could increase the sensitivity by a factor of 4 by increasing V1 up to the 20V (=2*10V) specification (The schematic/simulator thing is pretty cool.) 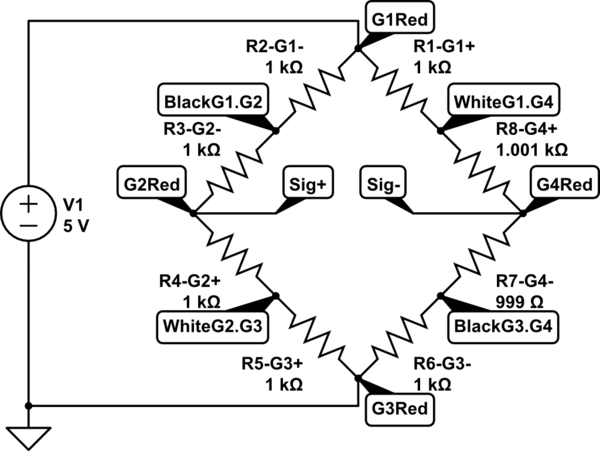 With only two devices, one should hook white-to-black and black-to white, imposing an excitation voltage from between these two junctions, and reading the differences across the reds, as increased load pulls one side high and the other side low.

OK, problem solved. The bridge is connected like this. Only one resistance in the load cells is variable, the other is fixed.

Why the confusion above? I was measuring resistance of a load cell which came from a different scale. The cells looked pretty similar, therefore I thought they were the same. But they were not! Eureka! 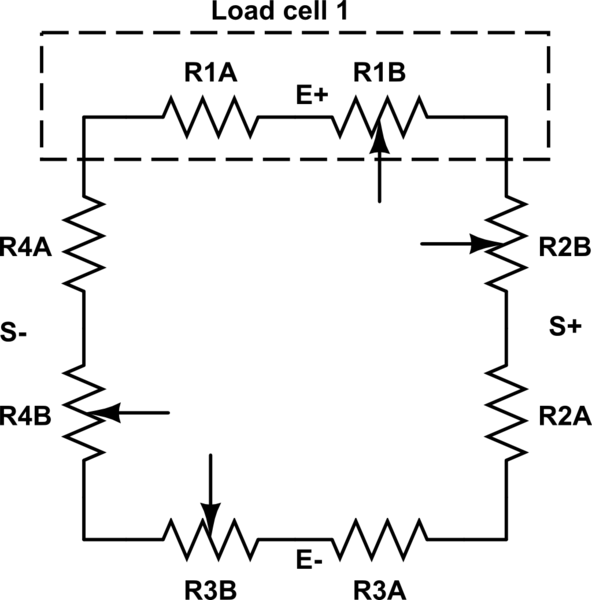 If the load cells are arranged such that the left and right halves of the bridge move in opposite directions, then the difference between S- and S+ will increase when weight is applied.