We had our Digital Systems class today, and our professor kept throwing around the word 'canonical' around a whole lot, but I'm very confused as to what this is.

What I understood is that it's the way of representing an expression uniquely (i.e., two non-equivalent functions cannot have the same canonical form) Is my interpretation correct.

So would Sum of Minterms be canonical or not? If we simplify the SoM form, would it still be canonical?

Canonical form basically holds every variable in its group.

Now you can simplify this to reduce the number of variables in the equation. This simplification is easy for us to solve manually. But for a computer, it needs to know the A, B and C values as a group (101+011+110 from the example above). Because of this, canonical form holds significance.

If you simplify, it just becomes a normal Boolean expression and not a canonical form

The function of multiplexer boolean expression

Simply put, a multiplexer selects one of its inputs and routes it through to the output. 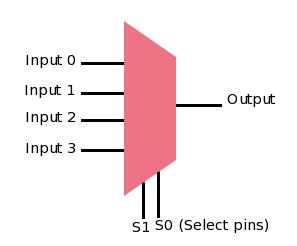 The "X" means "Don't Care", or more strictly "This value doesn't affect the results of the truth table". The output value as "I0" etc indicates that "The output is whatever this input is set to".

Taking your multiplexer from above, with a specific (fixed) set of values on the input pins (1, 0, 0, 1), the full expanded truth table would look like this:

If you were to take S1 and S0 as the inputs to some unknown logic gate, and examine the output from it to determine what the gate was, so ignoring the I0-I1 pins since they are fixed, you can equate that table to another known truth table. Let's collapse it by removing the static input values:

Of course, change the combination of values on the input pins, and you can change the way the output works. Just by inverting the whole of the inputs, so you have 0, 1, 1, 0 instead, will completely invert the output values, so the XNOR becomes an XOR. A different combination could make it look like an AND gate, or an OR gate, etc.

In this mode, where it is able to emulate any single low-level gate, is known as a "look-up table" where, instead of actually performing a logic function, it uses values to "look up" another value from another place, in this case the input pins.

Look-up tables are used extensively in FPGAs and other similar programmable logic, where the output of a logic cell can be, to a large extent, pre-programmed into a block of memory, and the incoming values just look up the output value in that memory. Just like a very large multiplexer.

To answer the 2nd part of your question: K-map representations connect from top to bottom, and left edge to right edge- so the outer 4 corners are all part of one adjacency group, A' (This means you can derive A' + BC directly)