I have an old Nad 302 integrated amp where one of the 2sd669 transistors is blown. I Cannot find any suggestion on modern replacements. To be honest I am a software engineer and analogue circuits is a bit out of my comfort zone.

To be precise it is the Q411 according to the service manual.

What would be a currently (2021) available equivalent, or better replacement?

In short, you want the same package (TO-126 or TO-225AA or equiv) and you want it to be an NPN. Since the peak collector current shouldn't be more than about \$50\:\text{mA}\$, I'd double that for a cushion at \$100\:\text{mA}\$ which is... pretty much any BJT at all. So that's not going to be an issue and you can just not worry about it, for now. I'd probably make sure that \$80\:\text{V} \le V_\text{CBO}\le 200\:\text{V}\$. With larger values being preferred while realizing that lower values may be acceptable and work well. A lot of BJTs may fall under your need here, so this is one parameter to keep in mind as you look.

I'd assume that the worst-case dissipation requirements are going to be met so long as you select a similar package. But the worst case instantaneous dissipation will be about half-way through its active part of the half-cycle. That dissipation value is so small that I'm not at all worried. The package is over-kill.

If you are interested, I'll sketch out some detail about my thinking process. This exposes any errors I may have made (which may hurt how others see me should I care about that) but it also may teach (should I be lucky enough to have avoided making serious errors.)

This site is more about electronic design as I see it and less about giving simplistic answers. (More about learning to fish than about being given a fish.)

That said, here are my thoughts in the order in which I had them:

That's about where I stopped.

One does need to just understand the basics of a typical class-AB output stage and then just go around the loop, so to speak. You do need to think about one entire cycle of AC over its maximum output range. But that way you can list out the important details as they arise and then also know what details are likely less of a worry.

One last point I need to add. This schematic drawing was obviously arranged so as to minimize wasted white-space and reduce the number of pages required. Hardly a nook or cranny was missed. It's not the worst I've seen by any stretch. One can easily see the basic skeleton of a decent schematic in there. But it's as if they've tightly packed it into a box with many bones akimbo. If I wanted to fully replicate this design and verify everything I see there, or should I be interested in finding design errors, I would completely and totally re-lay out this schematic so that it was more readable.

The schematic drawing is really pretty bad, as shown. Those two pull-down resistors, \$R_{447}\$ and \$R_{449}\$, look almost as though there is some mysterious signal coming in through \$C_{427}\$ via them into the output section. Signal is usually arranged to flow from left to right. So that's what I tend to expect when I see things laid out like that. But it's really just a pull-down with \$C_{427}\$ helping to sustain a more constant current in \$R_{447}\$ over a cycle. In fact, that capacitor detail (kind of a bootstrap concept) was almost certainly included because of the above comments I made about the negative-half-cycle. If they'd have missed including it, then I'd have stayed more leery of this schematic. But it was there, so I felt better.

I always recommend at least considering the idea of re-drawing schematics before attempting to spend any significant time studying them. There's usually plenty of room for improvement. See here for more thought about this aspect and some guidelines.

as per diagram below. 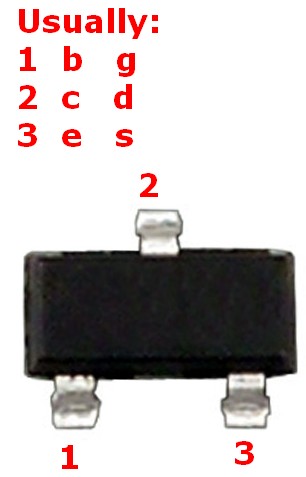 MOSFET N Channel needs low Vgsth.
CES2310 utterly superb if you can get them. OR

No gate resistor needed. Use say 1K if desired.

For P Channel use Digikey selector guide to select out specs of chouce then sort by price ascending in quantity 1.

This is a truly marvellous part for amateur general use. Be ware of 20V Vds max but otherwise marvellous.
eg 0.2V Vds at 1.5A at 2V Vgs.
500 mW disispation and 250 K/W mean due care needed thermally (as in all SOT23)
BUT very low Rdson will keep it OK in many cases.
eg 98% of these have < 80 milliohm Rdson at high temperature.
At say 1A dissipation <= 80 mW for 20 C case rise on modest copper.

There is a silicon NPN transistor whose code is just 5610. The only replacement part listed in www.icreplacements.com is NTE24. Complete information source: