i would like to ask about what is a Schmitt Trigger and about its application.

I searched a lot but still didn't understand it. Please explain step by step and hope you help me in its applications in real circuits.

So a Schmitt trigger is a device (or the input portion of a device) that has separate thresholds for a rising signal and a failing signal. Obviously the threshold for the former is higher.

In this diagram, two bands are shown. The top one represents the high set point, and the low band represents the low set point. They are shown as bands since there will be some tolerance in the specification. The difference between the bottom of the high band and top top of the low band is the hysteresis of the device.

As mentioned earlier, Schmidt triggers can be used for either slowly changing signals, or noisy ones. Here are some examples of places where Schmitt triggeers can be used: 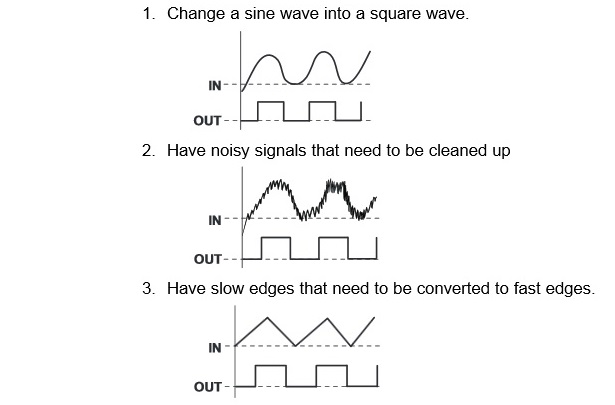 There are many ways to buy or build Schmidt triggers. There are many logic ICs that include Schmitt triggers on their inputs, such as the 74HCT132, but it has fixed thresholds.. You can also build one using discreet transistors, but the easiest is just to use an op-amp since the only additional components needed to add the hysteresis are resistors: 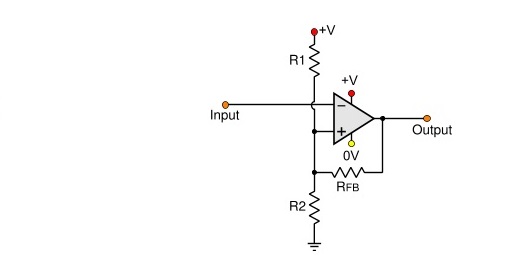 Unlike a lot of Schmitt trigger schematics found on the web, this one uses an op-amp with a single supply. The voltage thresholds \$V_{\text{high}}\$ and \$V_{\text{low}}\$ are set using a combination of the voltage divider resistors \$R_1/R_2\$ and the feedback resistor \$R_{\text{FB}}\$:

There is a nice Schmitt Trigger Calculator that makes it easy to figure out the resistor values you need.

You can go for a voltage reference IC like this one. This can be used as supply voltage for your Schmitt trigger IC alone. You can scale down the threshold of 13.8 V and 13.0 V to 4.6 V and 4.3 V respectively (or any other values), using high value resistor divider at the input side of the Scmitt trigger(So that, it doesn't waste current there). The UTP and LTP are now referenced to an independent constant voltage reference from the IC. The inputs however will vary depending on battery voltage.

Look at delta-Vt figure in table 7.7. 3rd line on page 5 in datasheet.

This spec is then read in conjunction with values for Vt positive and negative going.

The following may bend the brain somewhat - it's not strictly necessary to follow it if you just follow the above ranges. [E&OE - if I've accidentally said something wrong plase point it out - easily done in such cases].

ie it is seen that with Vtneg at it's minimum values the addition of the range of possible hysteresis value gives exactly the range of Vtpos values - which is as it should be.

It is easy enough to draw a 'state diagram' from the above showing areas of valid operation. There can never be any overlap. ie for a given situation Vtpos will always be > Vtneg.