I designed device based on AD725ARZ, datasheet is here. Device is built basing on the reference circuit diagram on page 12.

TV is connected to composite output of the circuit. It does not have S-video input, thus no way to test the S-video image (at least for now).

There're two encoders connected in parallel to the CSYNC and RGB lines: 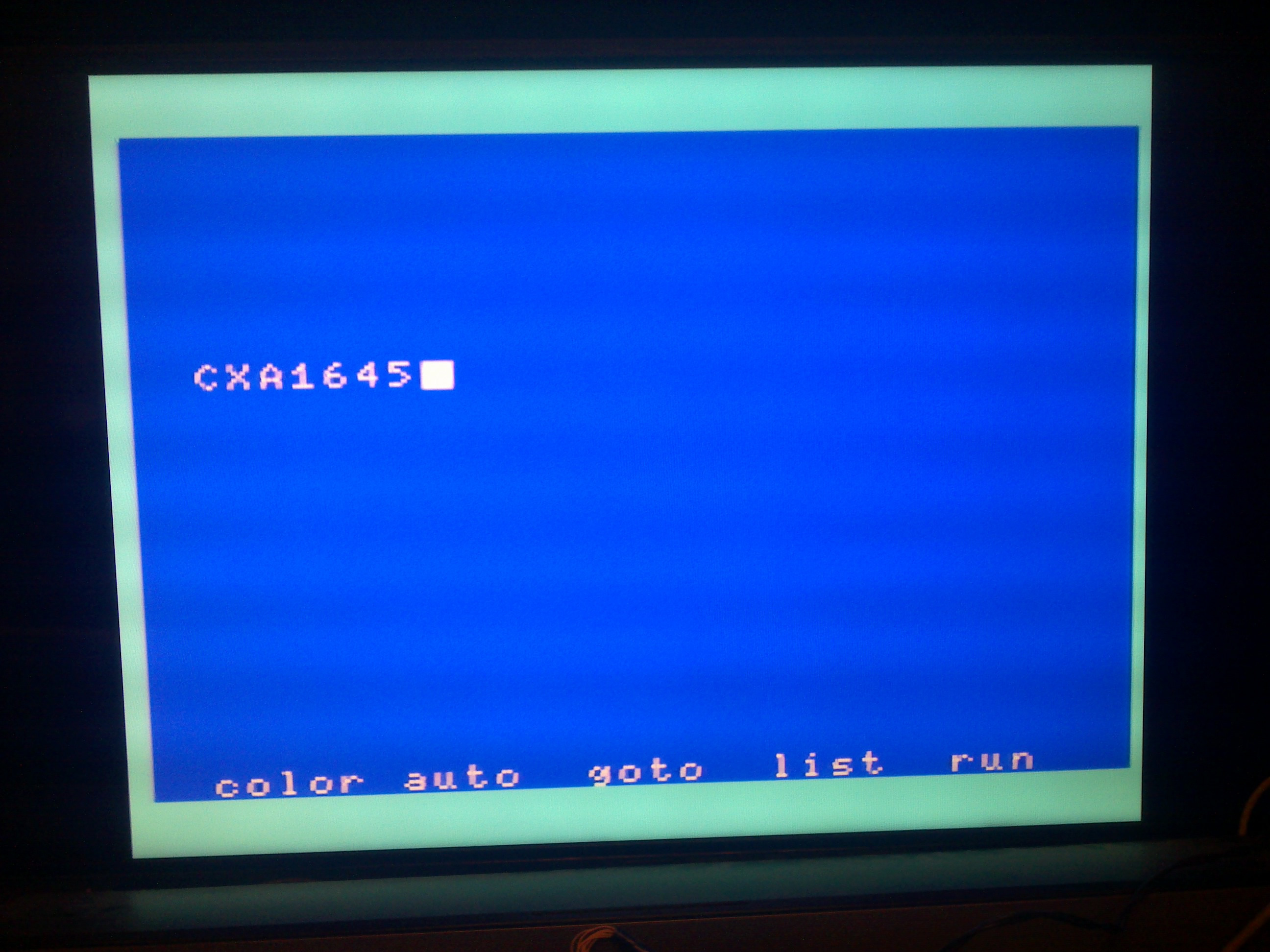 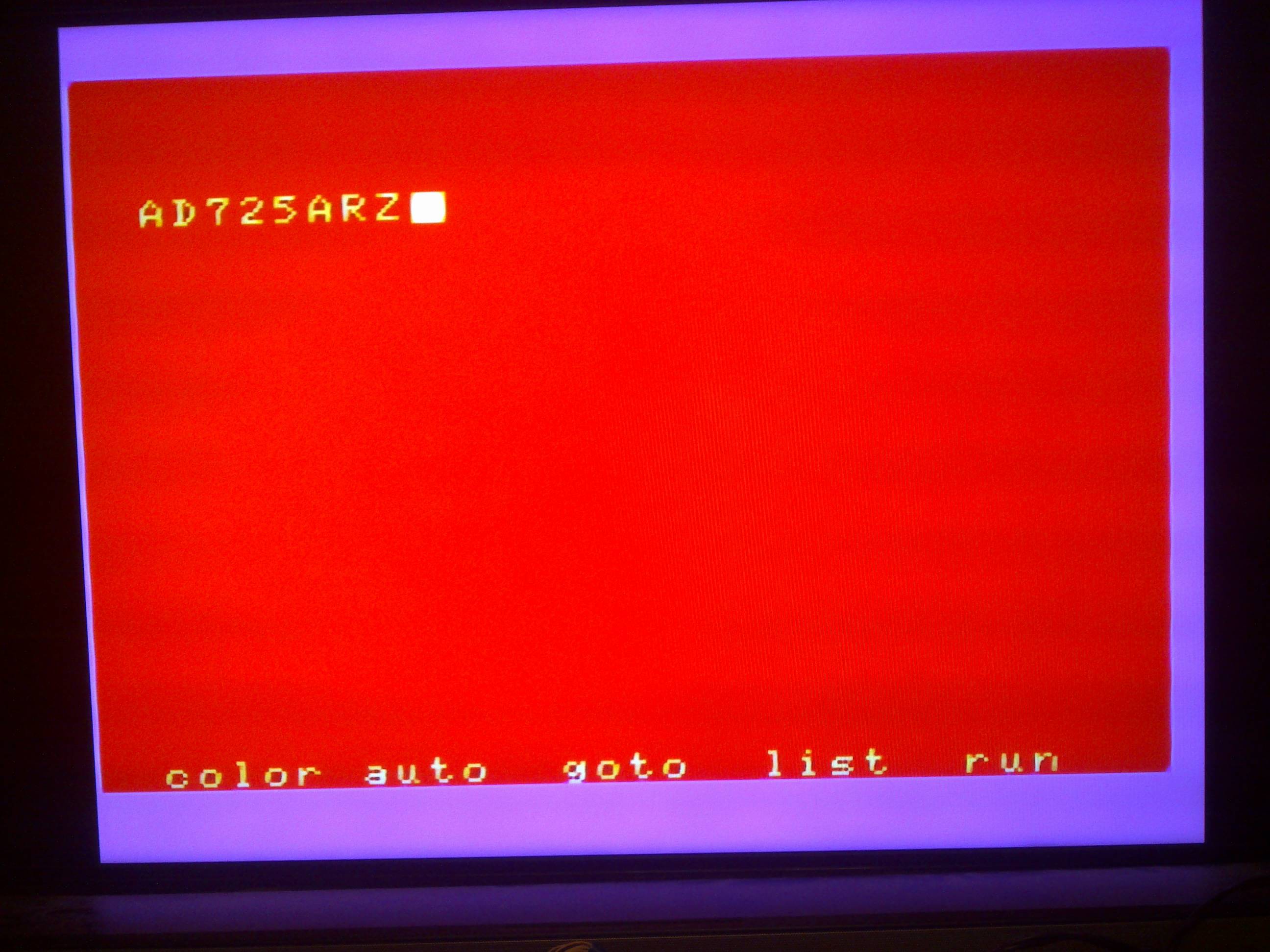 The obvious idea comes to mind is that I just confused R and B input wires, but it is NOT the case. I checked the wiring several times, and also looked with scope onto the input pins of the AD725: the pin 8 has most activity, which must be the blue color (as picture consists 90% of blue).

The standard used is NTSC. Picture is stable, which means that sync is OK. Board is wired using air-wires, suffers from some degree of dot crawling but that's a problem of wiring and cabling.

Now another piece of information: the board based on AD725 has logic to switch to PAL in case it detects vertical sync of 50 Hz (you can see the related stuff in the reference circuit in AD725 datasheet). When machine switches to PAL mode, colors change! Here is the pic: 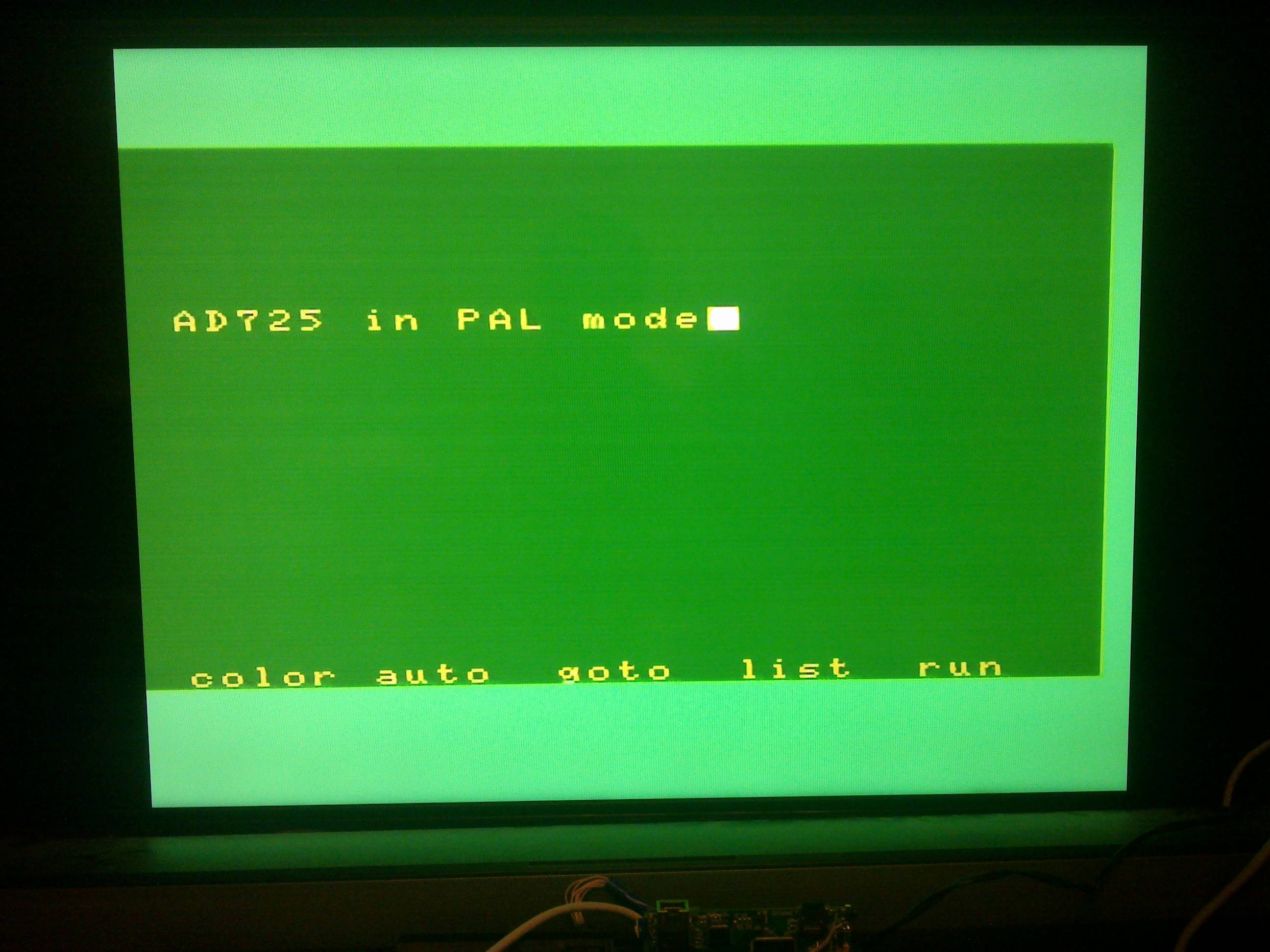 And now we see green color instead of blue one! But that's not all… even in NTSC 60 Hz mode, if I force AD725 to work in PAL mode, it starts showing same green screen instead of red…

Any ideas what could be the cause?

What can I do to troubleshoot the problem further?

Update 1: board images as requested by Wendall. It is a prototype. CXA1645 properly working board is made the same way. 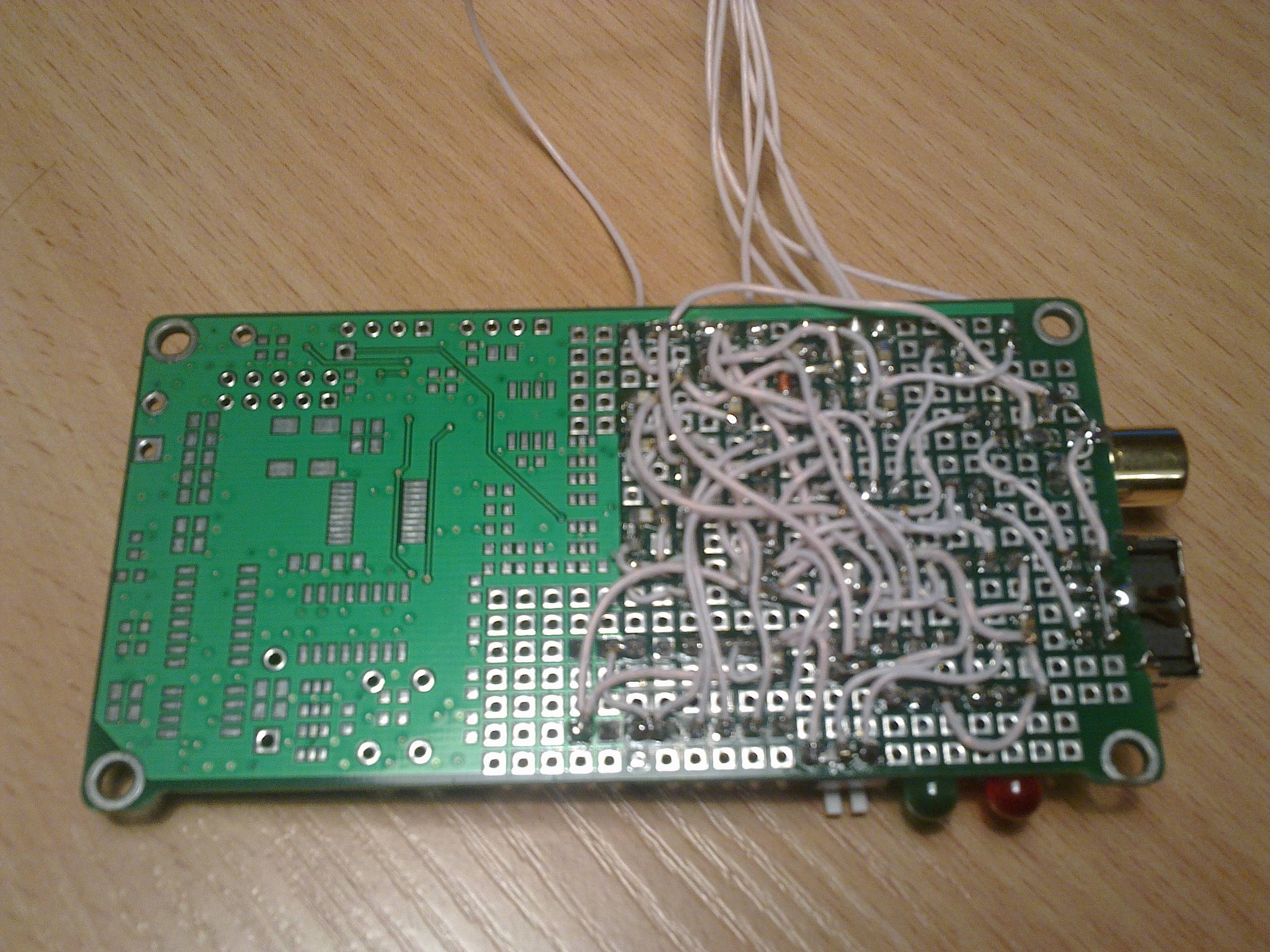 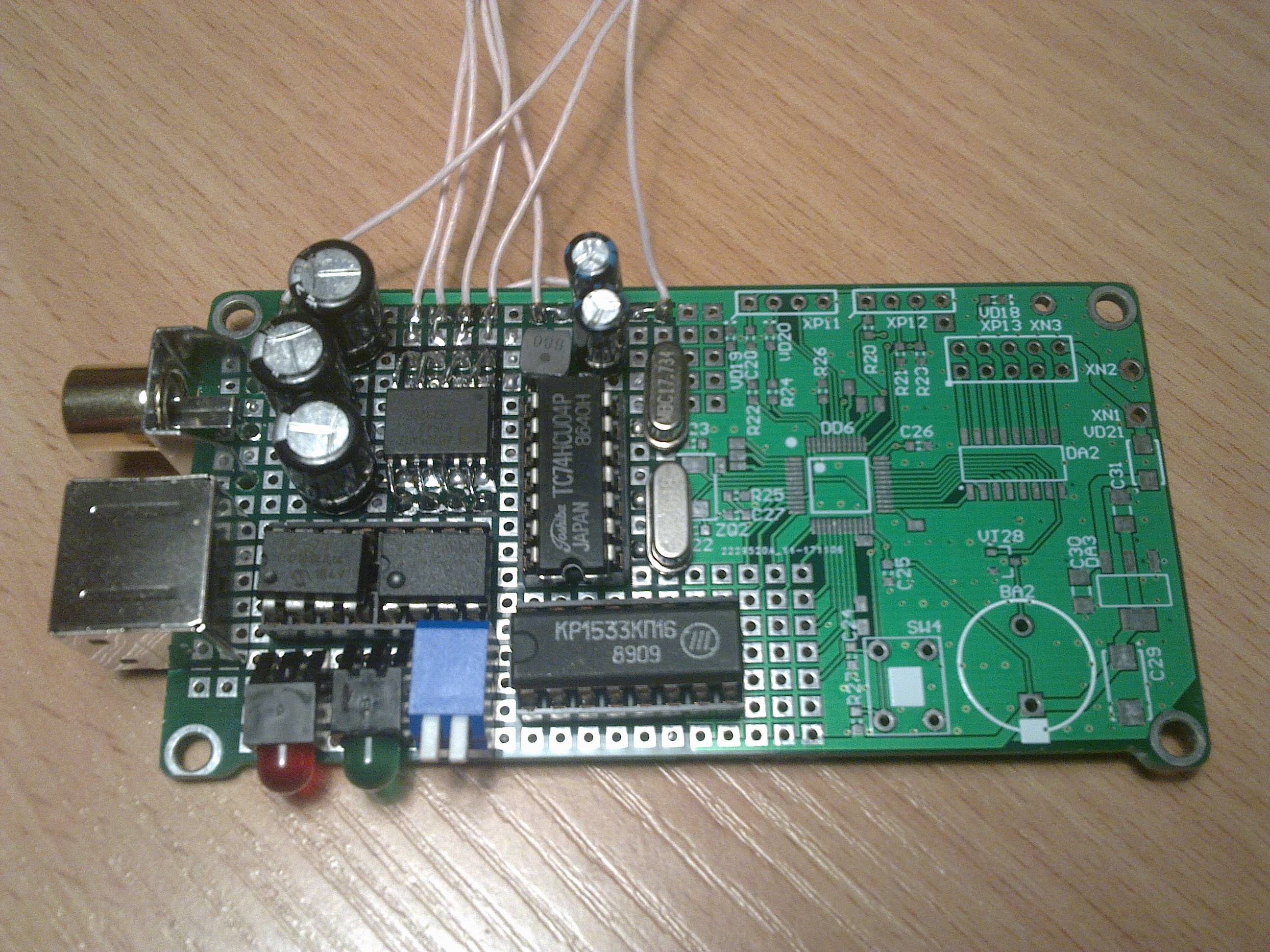 Update 2: It seems there's a DC offset at all the color inputs of the chip, and sometimes colors saturate. I can not understand the source of it, all three colors are decoupled using 0.1 uF.

But CXA1645 does also have DC offset of about 3 V at its inputs, and works properly. I guess it performs some kind of leveling inside removing common DC component out of R/G/B. 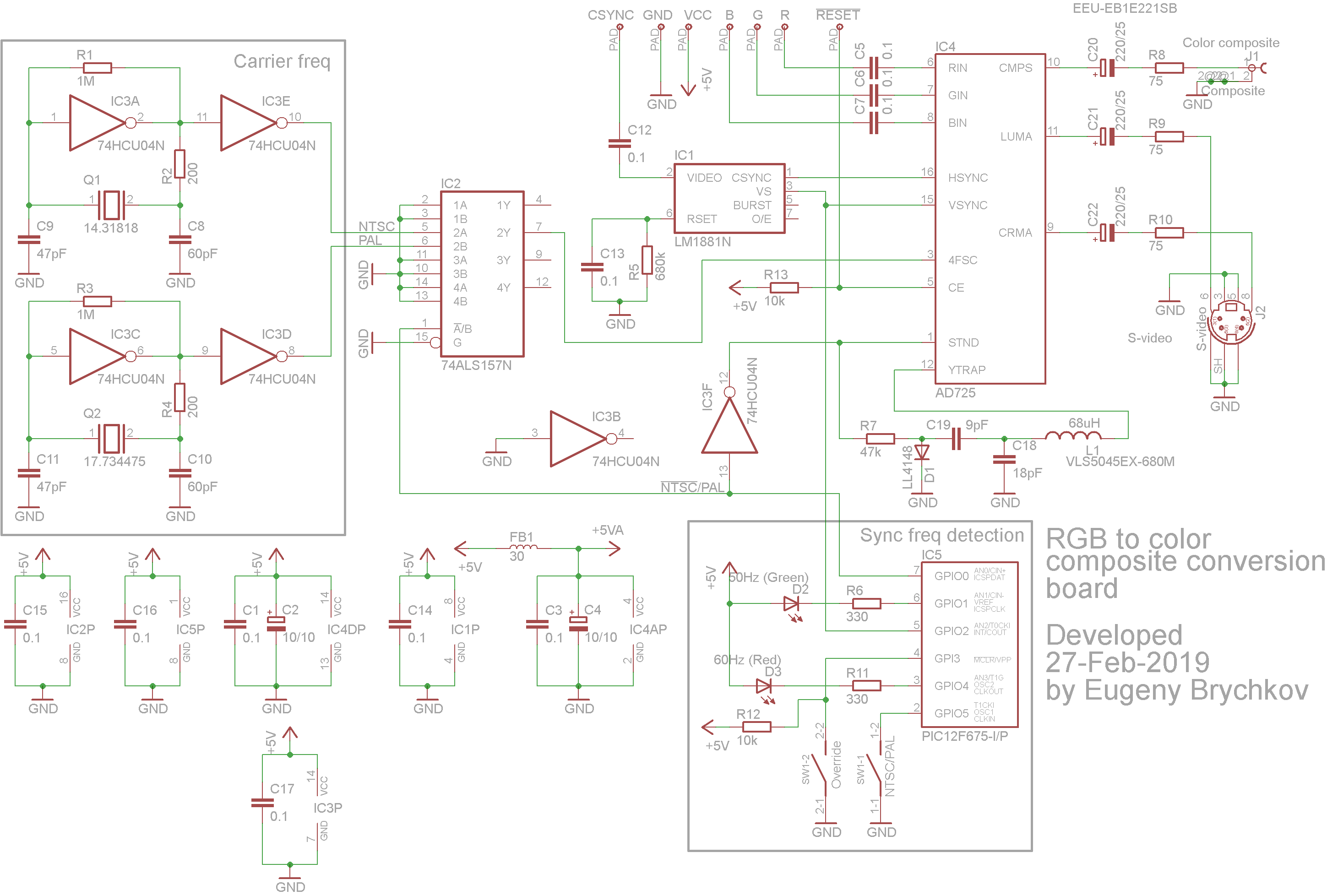 Update 4: I have removed all the logic out of equation, connecting pin 3 directly to 14.31818 generator, 16 to TTL CSYNC signal, 15 to +5V, and 1 to +5V (together with another arm of YTRAP circuit). Result is the same – red instead of blue. Seems chip is defective.

Update 5: I used this circuit from Wikipedia to sum up Y/C into composite in hope that there's something wrong with composite output. No way, red screen instead of blue again.

Update 6: I created the post at AD's EngineeringZone, and first reply refers me to some other post I have seen talking the theory of not much related to my issue without solution. That's why I prefer customer support which usually asks for pictures from scope screen and hard data rather than trying to make quick "guess yourself" answers.

But I tried to create support ticket yesterday with them, with zero result. Tried twice, no confirmation email arrived, and no support contact has been made so far.

Update 7: disconnected all other devices from the RGB lines (CXA1645 and grayscale mixer) in suspicion that there may be crosstalk between wires AD725 so sensitive to – no result. Exchanged R and B input wires – I was expecting that screen will get blue now (logical if I would confuse R and B lines), and it is NOT the case! Screen is green now! But – the border has almost correct light blue color. Note the cursor has the expected white color. 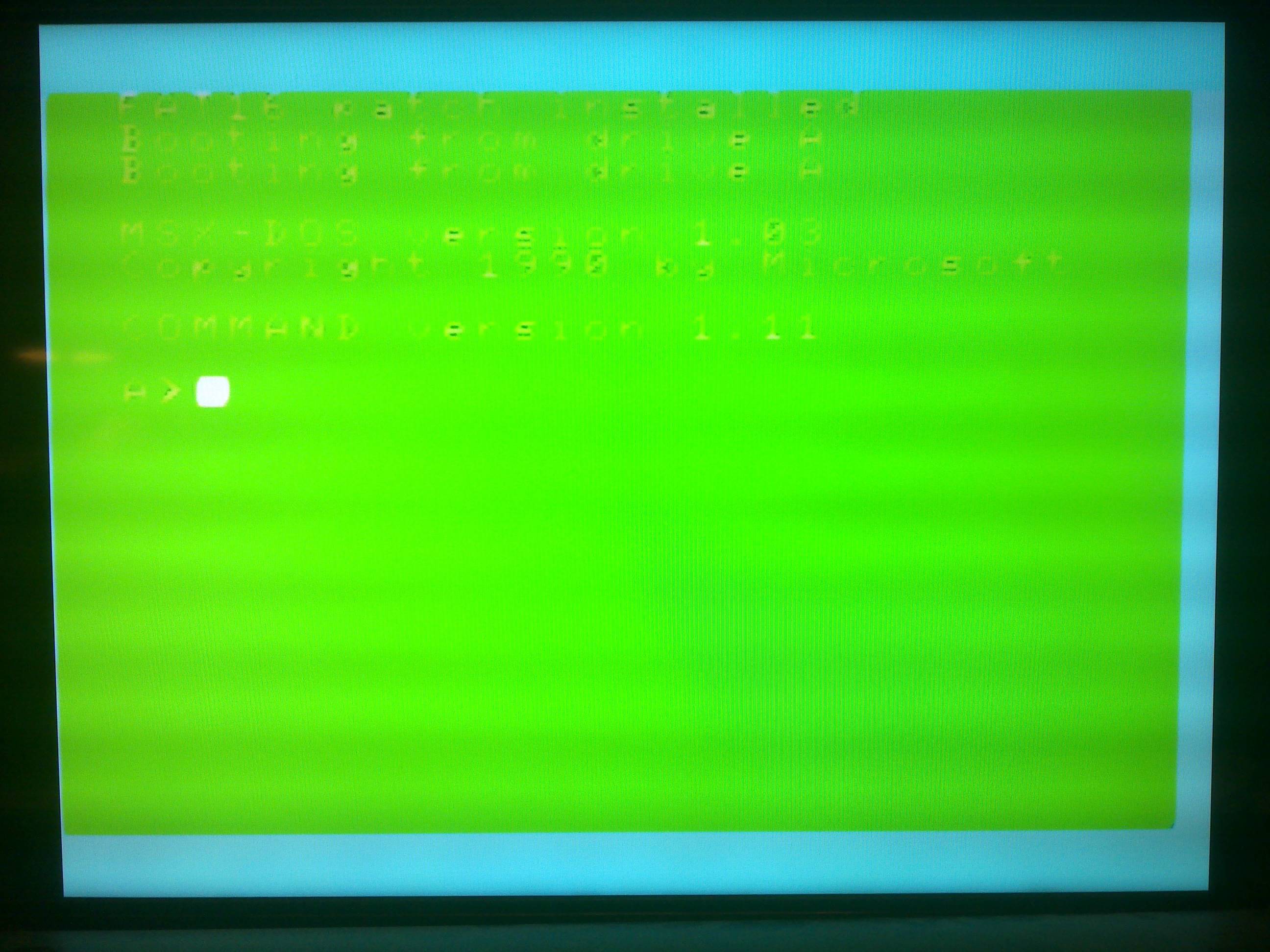 Analyzing the datasheet I suspect something bad had happened to the "RGB-TO-YUV ENCODING MATRIX" part of the chip.

Blue: massive output (max digital value for most of the screen) 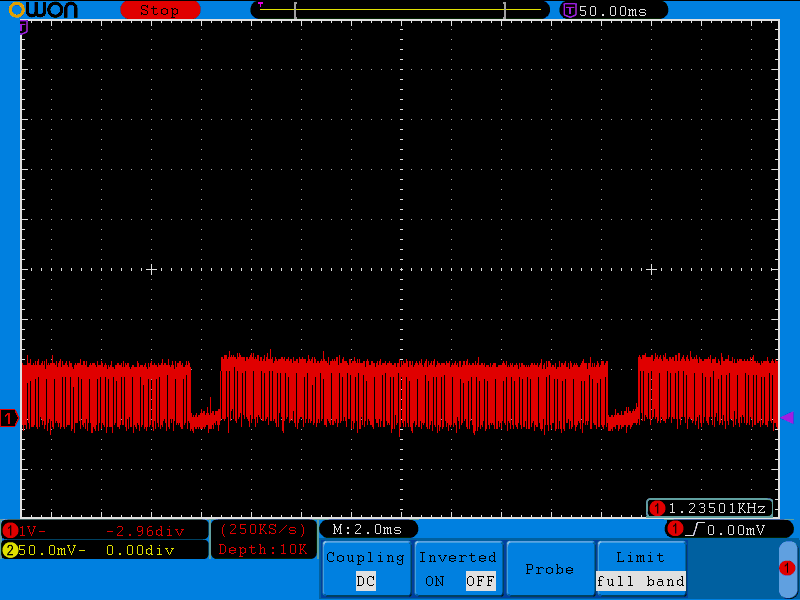 Red: almost none (there's some white text on the screen, which has red component in it) 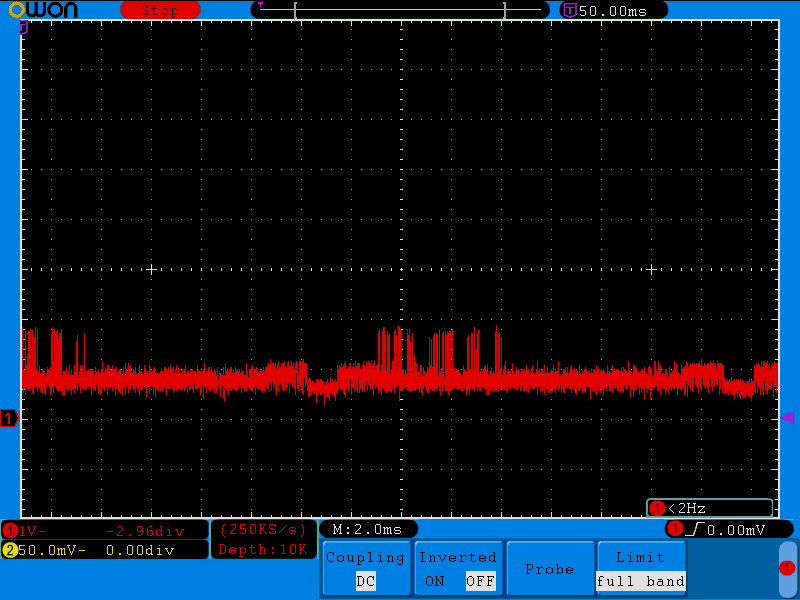 Green: moderate activity, I think it is mostly caused by the light-blue border (where max blue sums up with max green value). 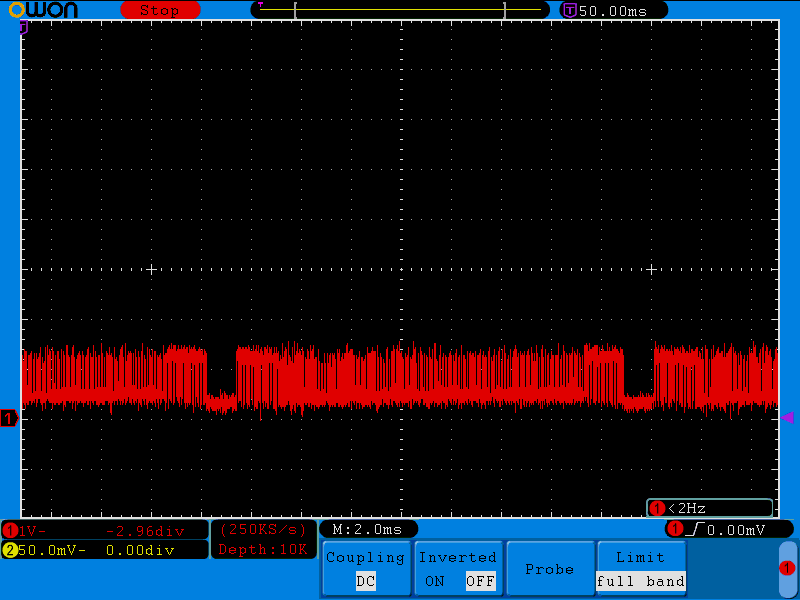 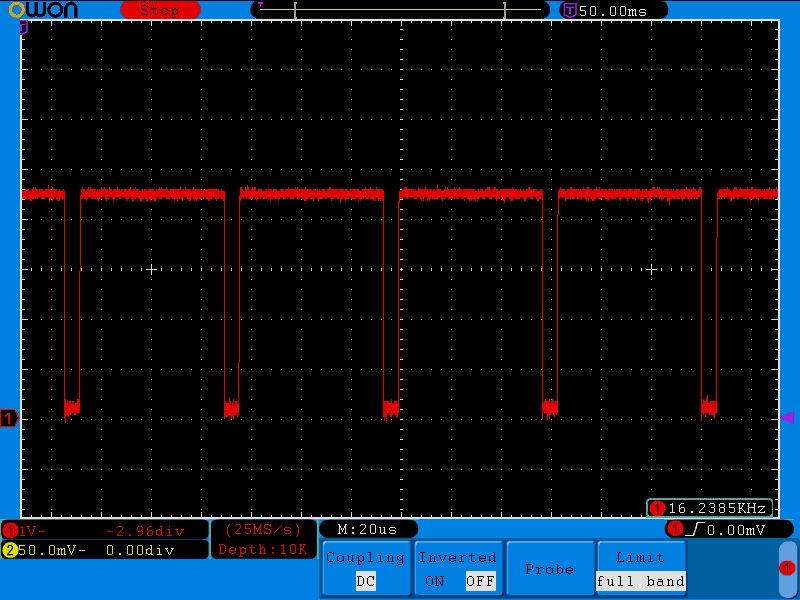 Update 8: following conversation with Bruce Abbott I did the following tests:

1. only one wire is connected 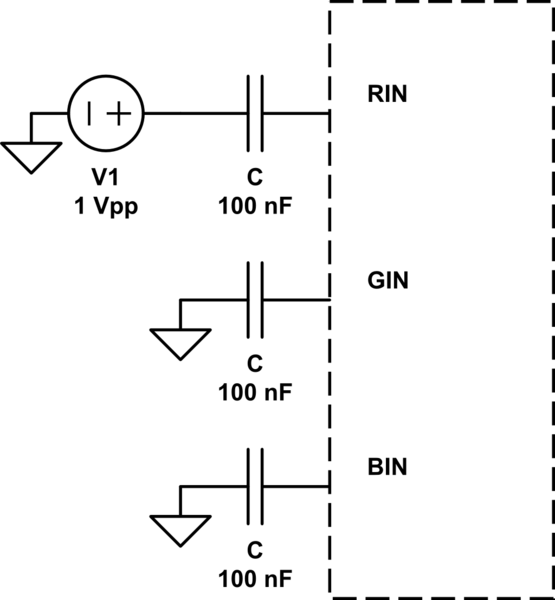 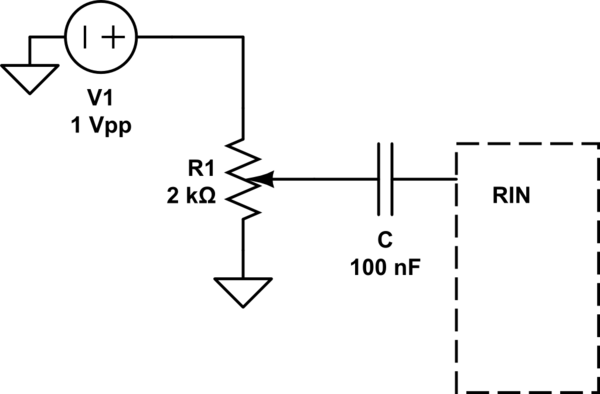 Potentiometer's value relative to ground: 19 Ohms versus 2 kOhm (thus it does NOT close completely to the ground).

Result: whatever I do with potentiometer I have relatively good green component picture. However: when potentiometer is very close to the ground and I touch its central contact with hand, image changes its color to blueish depending on the pressure I apply with the finger (=applied resistance), but image remains stable.

I made a mistake in the circuit when made conclusion above (connected potentiometer to unused pad rather than ground 🙁 ). Thus result is that screen is green anyway, and turning potentiometer towards ground fades the green image away to dark green and then to almost black.

I also ensured that clock is as close to 4*Fosc for NTSC as possible: 14.3183 MHz as far as my scope tells me.

Reading some more info (e.g. here) I start to believe there's something indigestible for AD725 relating to waveform itself, CSYNC or their timing. But I still have no clue why wire with blue color information, connected to the red input of the chip, produces proper and stable green image on the screen of my TV!

The mother circuit had the location to source this signal (as video processor outputs 4.7 max, and prolongation of the pulse was introduced down the circuit), and I reused this signal.

Now circuit works properly in both NTSC and PAL mode. Small dot crawling and ripple exists, but I am sure I will be able to eliminate them with proper board tracing and carrier frequency tuning.

It seems chip can cope with 1 Vpp signal well, not sure if I need to implement additional attenuation circuit. 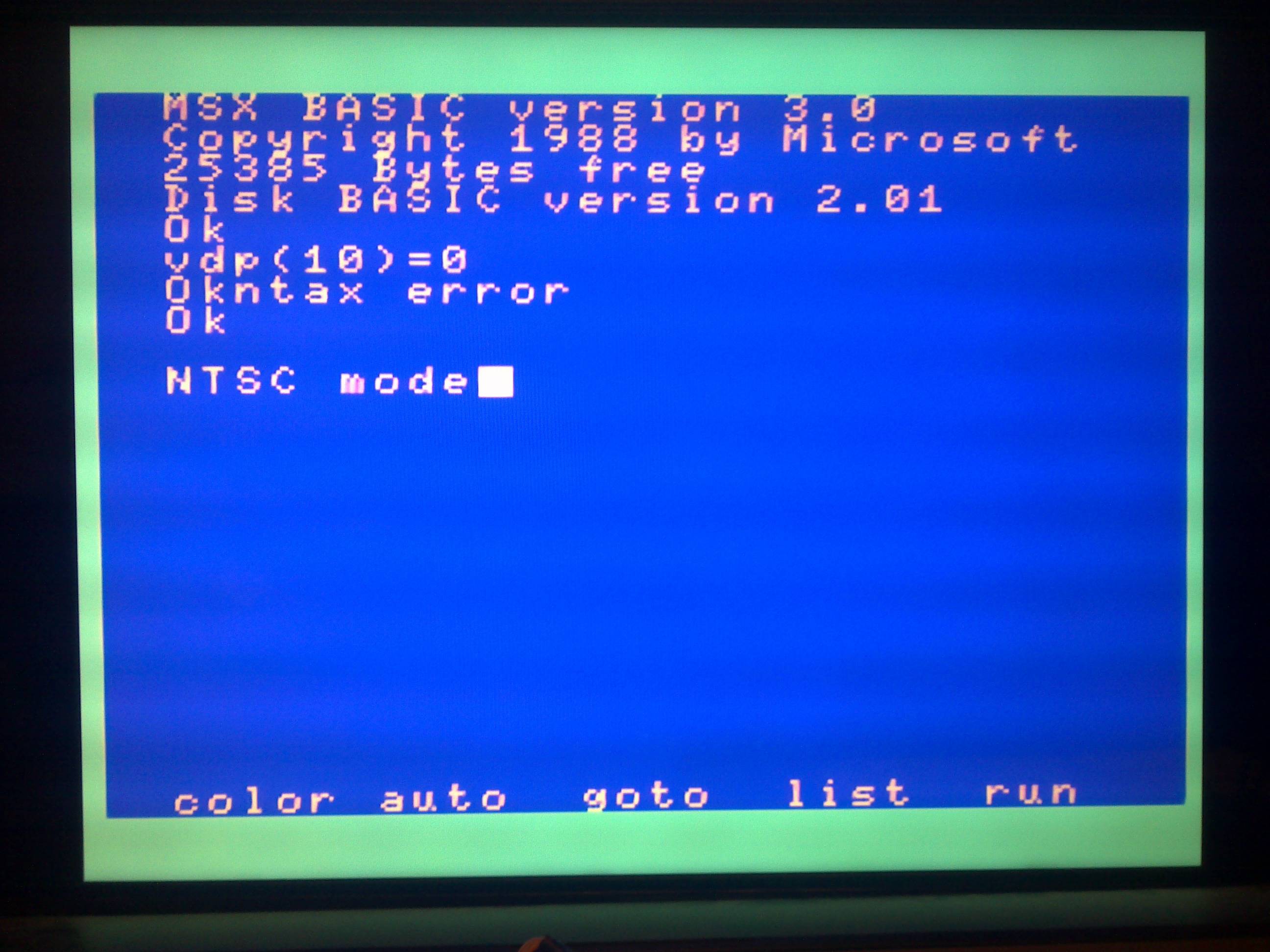 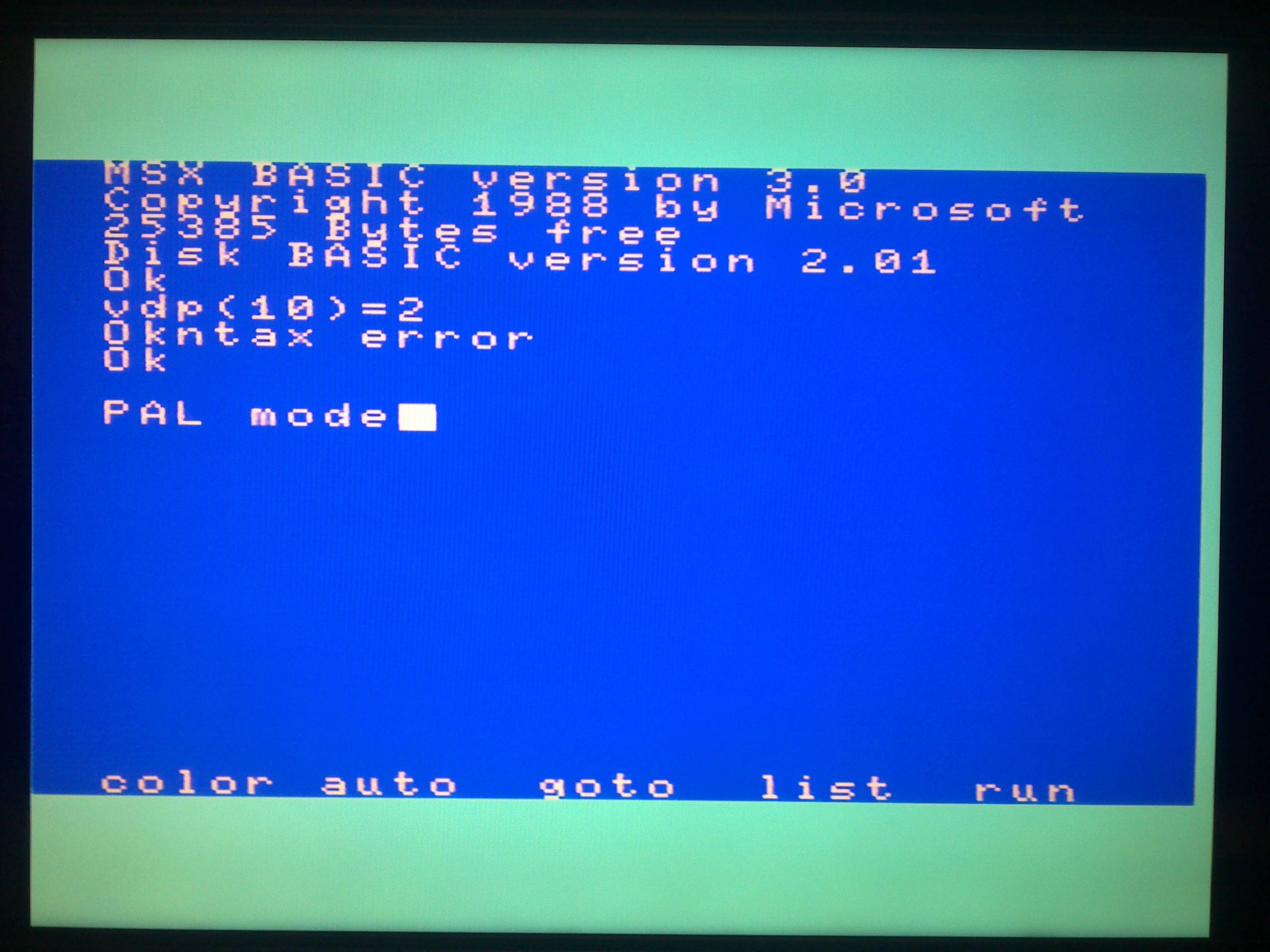 The next To-Do is to figure out how to make PAL mode's main screen area to be centered. There's no border to the left at all.

You're probably best off using a dedicated chip to do the decoding. A quick trip to Farnell's website showed a few of these under CODECs/encoders/decoders, with digital output selected. This type of chip forms the front end of frame grabbers and some displays, with chips like Brooktree bt848 recording the data to memory.

It's possible you can build a lower cost alternative using the same analog circuitry an old TV would; a comb filter to separate into Y and C components. Digital comb filters are apparently patented. Intersil AN9644 might be one document to read.

Electronic – How to generate a composite video

Actually, using a suitable micro you could get 12-bit colour and reasonable resolution.

For example, the STM32F407 has two 12-bit DAC's that can be continuously loaded by DMA to generate composite video. Allocate a section of RAM (it has 200kB) to be a frame buffer, fire up the DAC and DMA and off you go - reasonable video from an MCU for zero CPU cycles. You can get an STM32F4Discovery board for US$15, including an on-board debugger, and the free Coocox IDE is pretty reasonable for what you pay. For another $45 or so you can add a base board with an Ethernet port and an SD socket for image upload.