I have ADC on stm32f429 with 3 channels turned on(writing data with DMA). Though I suspect this question may be not STM32-specific, probably a general ADC question.

THE "ANSWER"
I found "solution". I tried to use channel 6 and 7 instead of 1 and 2 – problem is gone. Apparently channel 1 and 2 are
"special", though I couldn't find why in datasheet(or I missed it).
Maybe they are more picky on the input power, idk. If there is someone
who can give some information – feel free, I will accept it as an
answer(if it is good enough). Maybe it IS stm32 specific, who knows…

My sensor is setup is basically a piezo sensor with some diodes to clip it to 3.3 V and omit negative part(I also tried to put 1M resistor in parallel to cap, but this solved nothing).

On this screenshot you can see the debug window in Keil uVision, it shows value 403 on the ADC ch 0 even if nothing is connected to it. I measured it is ~200-250 mV. Because Channel 0 is the only one working with sensor I assume other channels should have the same ~250mV on them, but they are not.

Here are my configurations for stm32f429 using HAL library. Every channel should be connected the same, but I wonder if something is wrong in configs…

EDIT 1
I also tried just to use piezo sensor with 1M resistor – same thing, as soon as I connect ch 1 or 2 – oscilloscope shows zero.

EDIT 2
One more strange thing – I beeped ch1 and ch2 pins and they seem to be grounded. O_o

The only thing special about channel 1 and 2 is that those channels are connected to the two pins that you blew with your piezo sensor.

But, you know this already. The pins are shorted to ground. This means you melted the input protection diode going from that pin to ground by pulling the pin too far below ground. 'Too far' in this case is whatever that diode's Vf is. According to the datasheet, you absolutely cannot pull any pin more than 300mV below ground, so we can safely assume that is when the input protection diode will turn on. It is not intended to ever carry current, and will promptly melt and fail closed if it does. That's why you're seeing 0V from your sensor as soon as it's connected to them - they're permanently shorted to ground now.

For reference, this is what all the IO pins look like on a microcontroller (more or less): 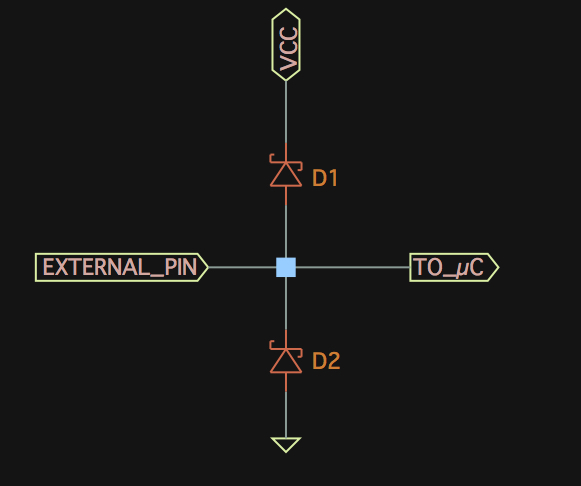 Pull the pin below the bottom diode's Vf, and it will gladly sacrifice itself to save whatever is connected to that pin deeper in the microcontroller. These input protection diodes generally have a very low Vf to ensure they turn on and create a low impedance path for the electrical fault (voltage swinging above VCC or below GND) to go that bypasses the rest of the microcontroller.

Depending on how you connected it, the protection would clamp the positive voltage, but still be able to pull the pin more negative than the pin can withstand. Well, I guess it doesn't matter - that's the only way those pins would be grounded, so that's your answer. Your protection was not properly wired or otherwise failed to prevent >-300mV being seen at those pins, and their ground diodes failed.

As for CH0 reading 400 when floating...so? It's floating. It doesn't matter what it reads, and it can read anything. It's floating. It's not going to read 0. 0 is ground potential. A floating input is not at ground potential. It's not at any potential. Random noise will couple into it capacitively and magnetically, there will be no path for the bias currents to flow, and it's not surprising the ADC's input saturates. But it doesn't matter. There is no reason to read an unconnected ADC pin because whatever reading you get is meaningless. To measure something, you first have to have something to measure.

Electronic – Circuit works on breadboard but not PCB

While more elaborate interrupt- or DMA-based code would be necessary to achieve the best performance, relatively minor improvements to your code would improve the situation already. I'd start by transmitting samples in binary instead of in text. This requires slightly more work at the receiving end, but will cut the required UART bandwidth by at least 2-3x (2 bytes per sample vs. up to 6 in text with separator). You can also readily increase the baud rate to, e.g., 921.6kbps, which is standard and should be well supported on the receiving end. Assuming a standard STM32F2 architecture, you could go up to 7.5Mbps but you'd need to check support for that at the receiving end.

With 2 bytes per sample and 921.6kbps, you would get a throughput of about 46'000 samples/s. At 7.5Mbps, you'd get 370'000 samples/s. If your application allows it, you could reduce the resolution to 8 bits and thus use a single byte per sample, effectively doubling the throughput in samples/s.

While 370ksamples/s is not bad, it's still pretty far from the theoretical 6Msamples/s (assuming STM32F2, 12bit conversion and using the 3 ADC in triple interleaved mode). This translates to 12MB/s of data to transfer from the MCU to the computer, which is no trivial amount. UART will not do. SPI, at a max of 30Mbps (2-3MB/s) wont do it either. Writing to a microSD card via SDIO would come close. USB 2.0 would do it but is much more complicated software-wise and requires external components for the PHY. ETH would do fine as well but would require additional components and a network stack to be implemented on the MCU. This complexity explains why, in most applications, the samples are buffered in memory and transferred asynchronously.