I am using a component that requires two headers to connect to it. I currently have a single footprint for this component that simply includes two copies of the connecting header. The problem I'm running into now is that our company is moving to streamline our process for creating files for our pick and place machine. Currently, I use the "Generate pick and place files" option from Altium to create the files, and then manually edit it to expand the single component into the two headers, but my bosses want to remove any manual steps from the process. Is there a way to get this single component to expand into two placements in Altium? 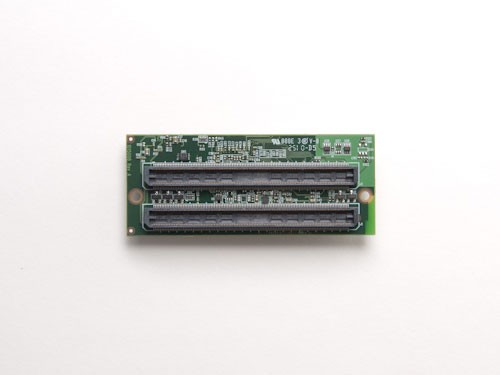 I ended up keeping the system in place as I have it, and created a script to parse and correct the generated Pick and Place files. Here's my reasoning:

There are 480 pins on the referenced part. Mapping those pins to the corresponding connector pads was a lot of work and messing up a single one of those might ruin an entire PCB run. Keeping it all in a single library part guarantees that the mapping is correct for whoever uses it.

apalopohapa mentioned that I could place the two connector parts in a subsheet with the correct mapping to expose the pins. Expanding this idea to support consistency company-wide, we could instead create a device sheet out of the part. This method would also keep the correct mapping, but introduces some annoyances that I would rather not deal with:

Getting the spacing right between the connectors is critical. Martin mentioned that I could use a spare mechanical layer to call out the distance between the parts. This would work fine if it only had to happen once. But, this component is already being used in two separate products, and will likely be used again. Keeping the part as a single footprint guarantees that we only have to get it right one time.

apalopohapa also mentioned that a snippet could be used to guarantee spacing. This would also guarantee that we only have to get it right one time, but again introduces a few problems:

Ability to logically divide part across the schematic

Each connector is 240 pins, so representing the component in the schematic as two connectors would take up an entire page of the schematics and would rely on external NetLabels to make connections to parts on other pages.

I've seen this done before (sometimes it is necessary), but this practice has always annoyed me. To figure out what is connected where, I have to continually flip back and forth between pages. It makes the schematic much less readable and maintainable.

With the device entered in Altium as a single component, I can use Altium's part feature to logically group the pins together. For example, all of the power and ground pins can be grouped together, and the sub part placed on the schematic sheet that contains all of my regulators, etc.

Having come back around to this question a few times in the last few days, I've come up with two possible approaches:

Electronic – What’s the typical way to manage components for a team in Altium? Component libraries in a vault? SVN Database? Other

I've used SVN controlled libraries in Altium before. We had a separate library for each type of part (e.g. resistors, capacitors, optoelectronics, etc). The system worked pretty well, but we did run into issues when two people were trying to edit the same library concurrently. We explored changing to a database system (Altium also allows for database libraries). If you use an MS Access for the database (in the form of a .mdb file) then you can directly edit the database inside Altium, but if you use anything else you'll have to have some external method for managing the entries in the database.