What is the correct definition of the LSB voltage for an analog to digital converter?

I have found two formulas:

N … resolution in bits of the ADC.

Has this anything to do with the location of the first code transition?

Can someone clarify this problem for me?

The definition for the LSB as $$ LSB = \frac{FSR}{2^N} $$ can be found in the IEEE Standard 1241-2010 ("IEEE Standard for Terminology and Test Methods for Analog-to-Digital Converters") and is commonly used for commercial devices. It can therefore be considered the right definition.

For integrated circuit design, when building an ADC as part of a signal processing chain or as a sub-block of a larger ADC it sometimes can make sense to to define the LSB differently (\$LSB = FSR/(2^N-1)\$).

The transfer functions of both types are shown below, the dotted lines indicate the range for mid-tread type and the dashed lines are for the mid-riser. 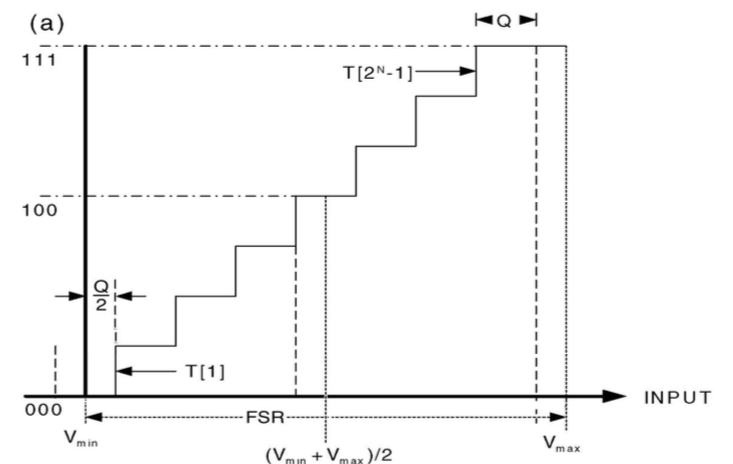 As shown in the graph the last-transition for the mid-tread type occurs 3/2 LSB below FSR while the first transition is at 1/2 LSB. In order to have a symmetric transfer function, the last transition is sometimes made 1/2 LSB below the maximum voltage. So one LSB is removed from the upper end.

The AD7798 is a differential ADC. It has a negative input and a positive input. When configured for bipolar operation:

Interesting. I don't think I've ever seen this anomaly before.

If the input voltage is slowly rising during that window, then the less-significant bits of the SAR output will be all-ones.

If the input voltage is slowly falling during that window, then the less-significant bits of the SAR output will be all-zeros.

A very narrow noise pulse at the "wrong" time during conversion can have a similar effect.

Right now my best guess is that you're using some sort of analog switches or op amps that don't work quite as well (higher resistance or something) near the high and low power rails as they do near mid-scale, somehow letting in one of the above kinds of noise, which causes the less-significant bits to be all-ones or all-zeros.

I've seen some sigma-delta ADCs and sigma-delta DACs that have good resolution at mid-scale, but worse resolution near the rails -- but the effect looks different than what you show.

The "plot of the difference between one sample and the next sample over the entire full scale range" is fascinating.

I am sampling "pulsed" DC voltages. That means that for each measurement I put a voltage on the DAC, let it settle for at least 100 times it's settle time, then tell the ADC to convert - and when conversion is finished, I put the DAC back to 0 V.

My understanding is that when ADC manufacturers say "no missing codes", the test they use involves several capacitors adding up to a huge capacitance directly connected to the ADC input, and some system driving a large resistor connected to that capacitance that very slowly charged or discharged that capacitor, slowly enough that the ADC is expected to see exactly "the same" voltage (within 1/2 LSB) for several conversion cycles before it sees "the next" voltage (incremented by 1 going up, decremented by 1 going down).

If I were you, I would see if such a "continuous slope" test gives the same weird "stuck code" symptoms as the "pulsed test". Perhaps that would give more clues as to exactly what component(s) are causing this problem.

Please tell us if you ever figure out what caused these symptoms.