I am trying to build a DC-DC Buck-Boost Converter using this basic schematic and an Arduino with the analogWrite() function as my PWM generator. I only want to step up 2.4-3V to ~5V. If it's just the capacitor and no load, the converter works so good that I have to switch it off after a few seconds since the voltage I measure on my capacitor is exceeding the capacitor limit. However, when I connect any load to the capacitor(for example a motor or a resistor) my voltage drops to a really low value(0.1-2v) and stays that way no matter what frequency PWM signal I send to the transistor using Arduino. I really tried but couldn't find the cause of the problem. Is it because I have two grounds, the battery pack one and the Arduino one? Is it because of the inductor(I tried using a smaller, 45uH, torroidal one but couldn't get any better results)? So what am I doing wrong?

I only expect to draw 500mA of current at 5 volts at the output side, and according to this calculator my inductor and transistor should be fine. 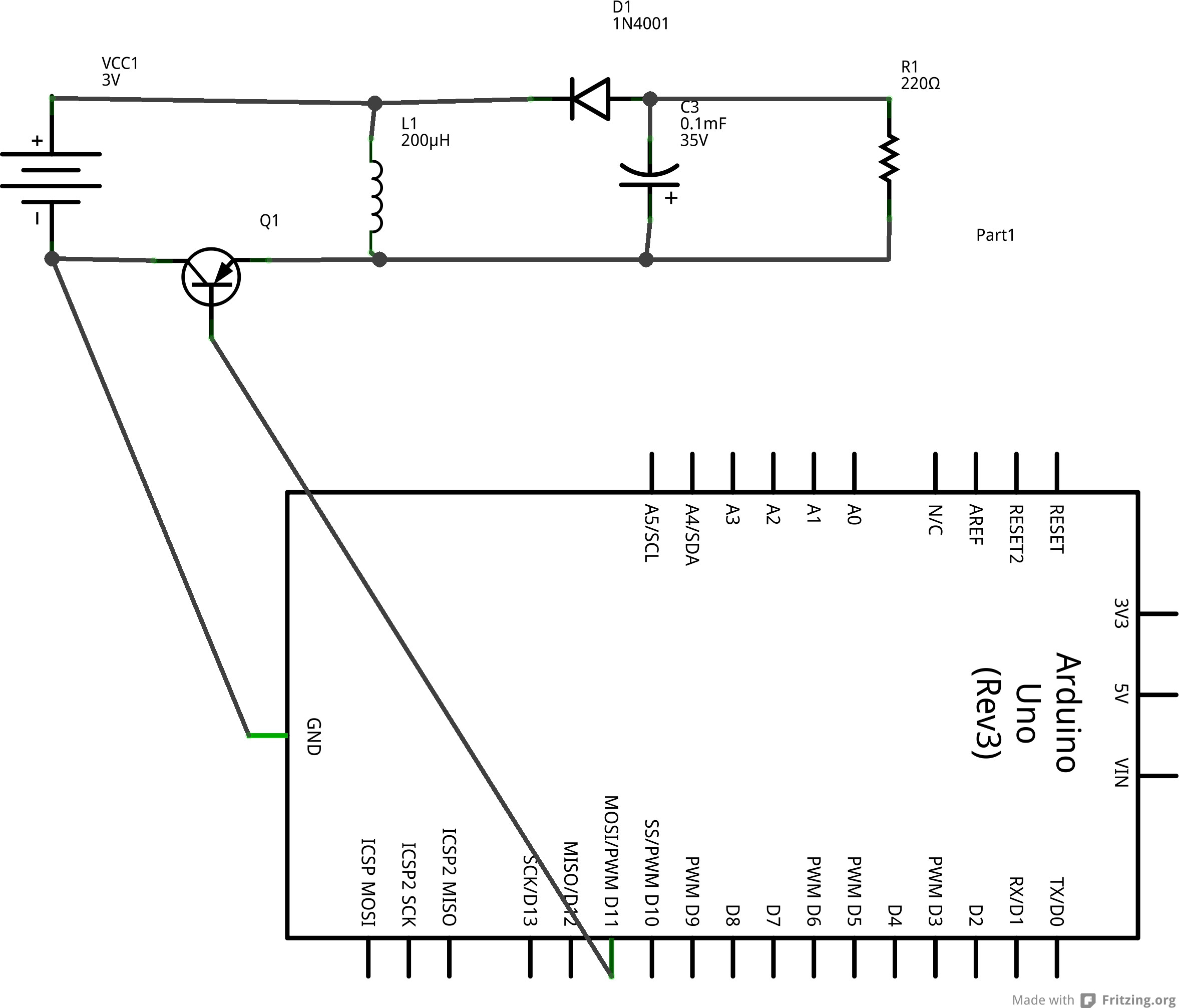 A schematic of the circuit or at least how it is supposed to look. Maybe I miswired something? The resistor is to represent the load, the value doesn't matter since my problem persists at any value but the multimeters "infinite" resistance. 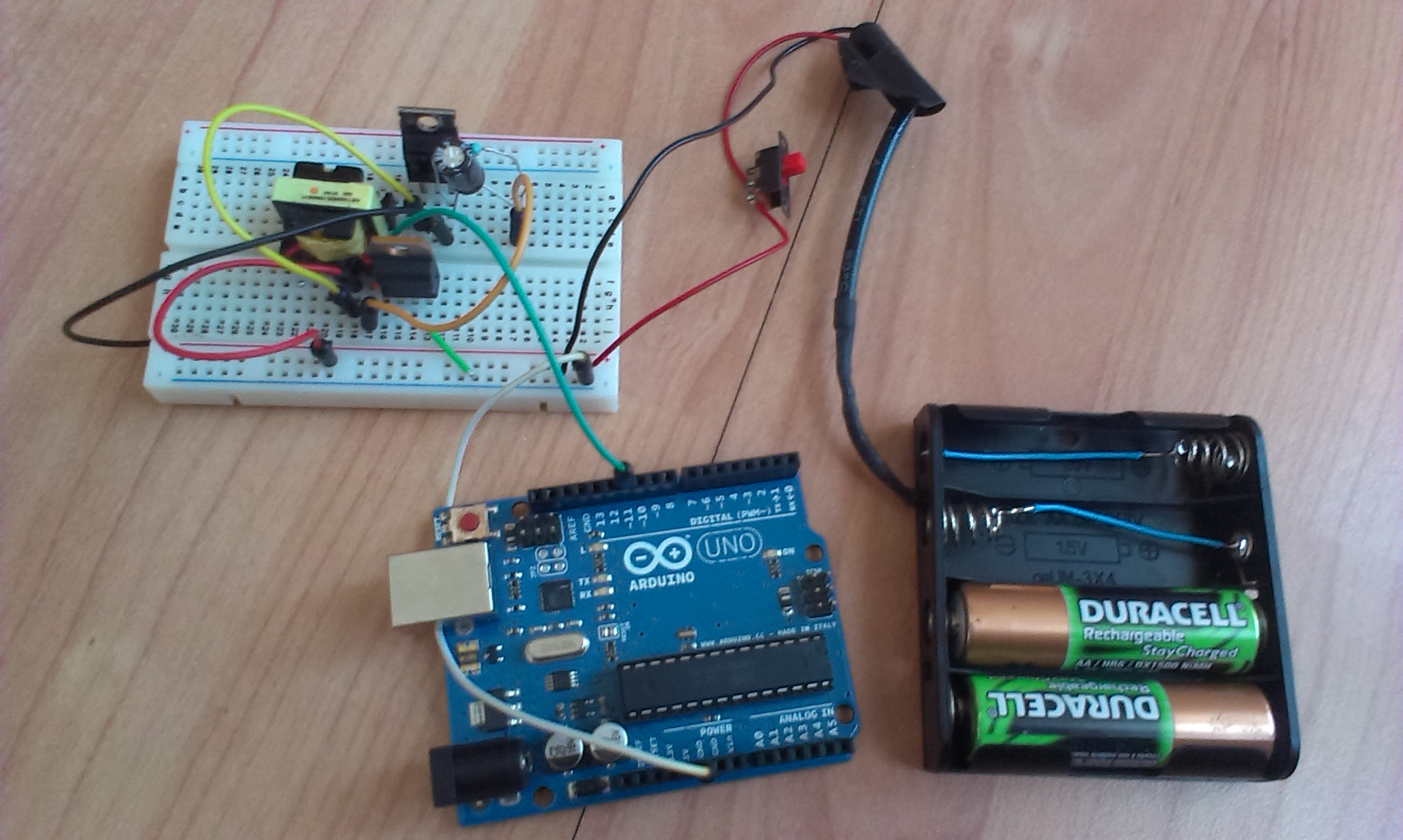 This is how my circuit looks 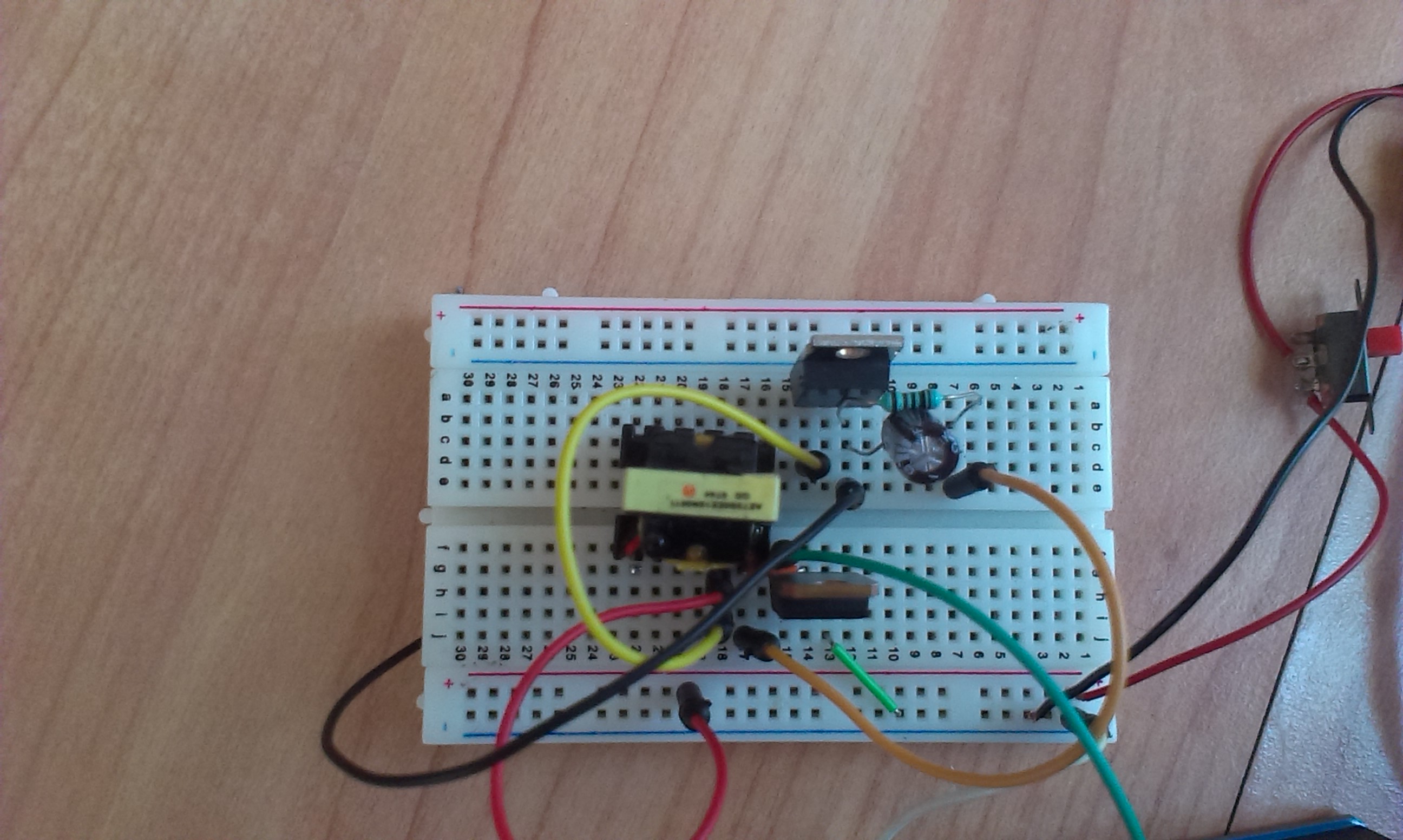 I used one coil of an old transformer as my inductor 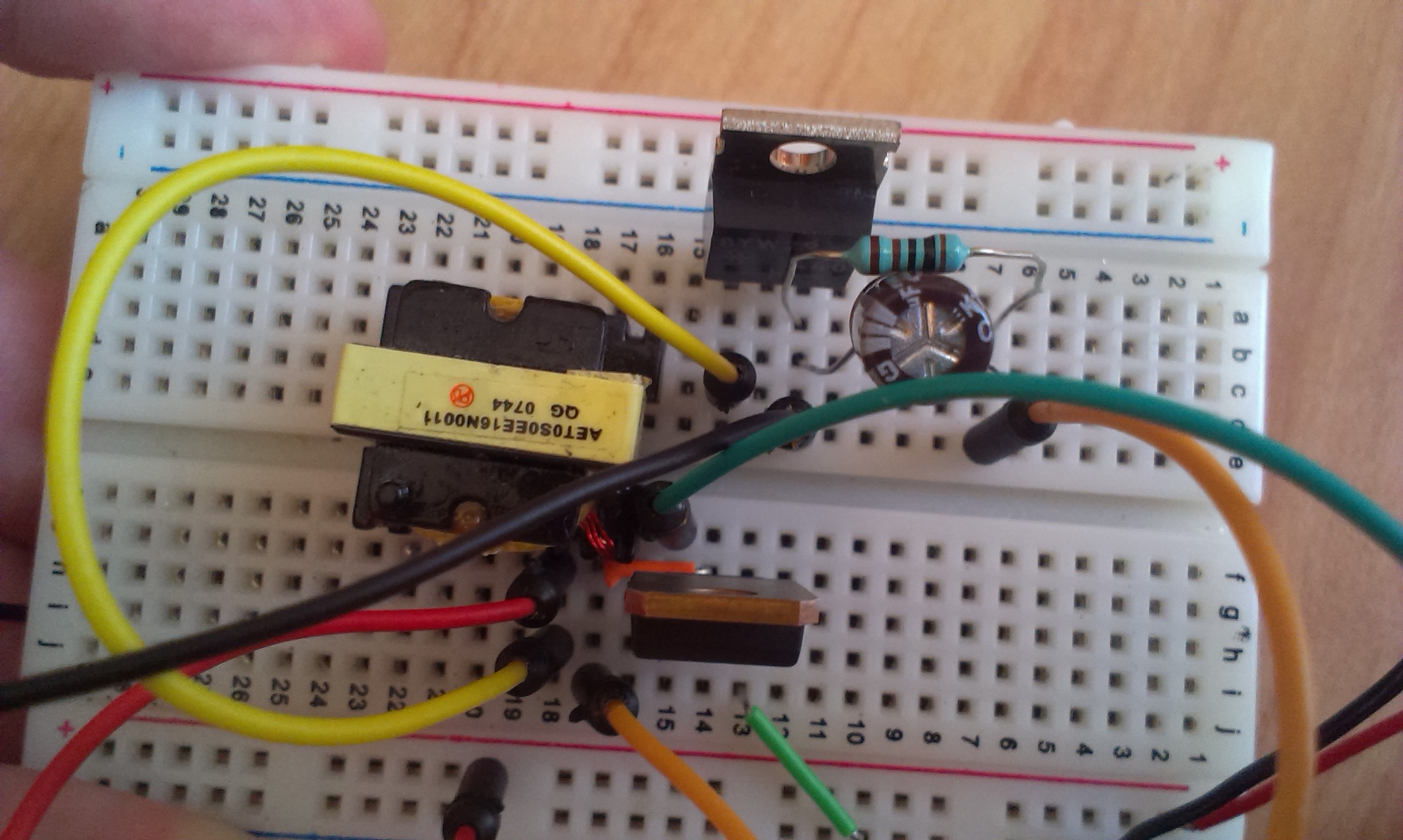 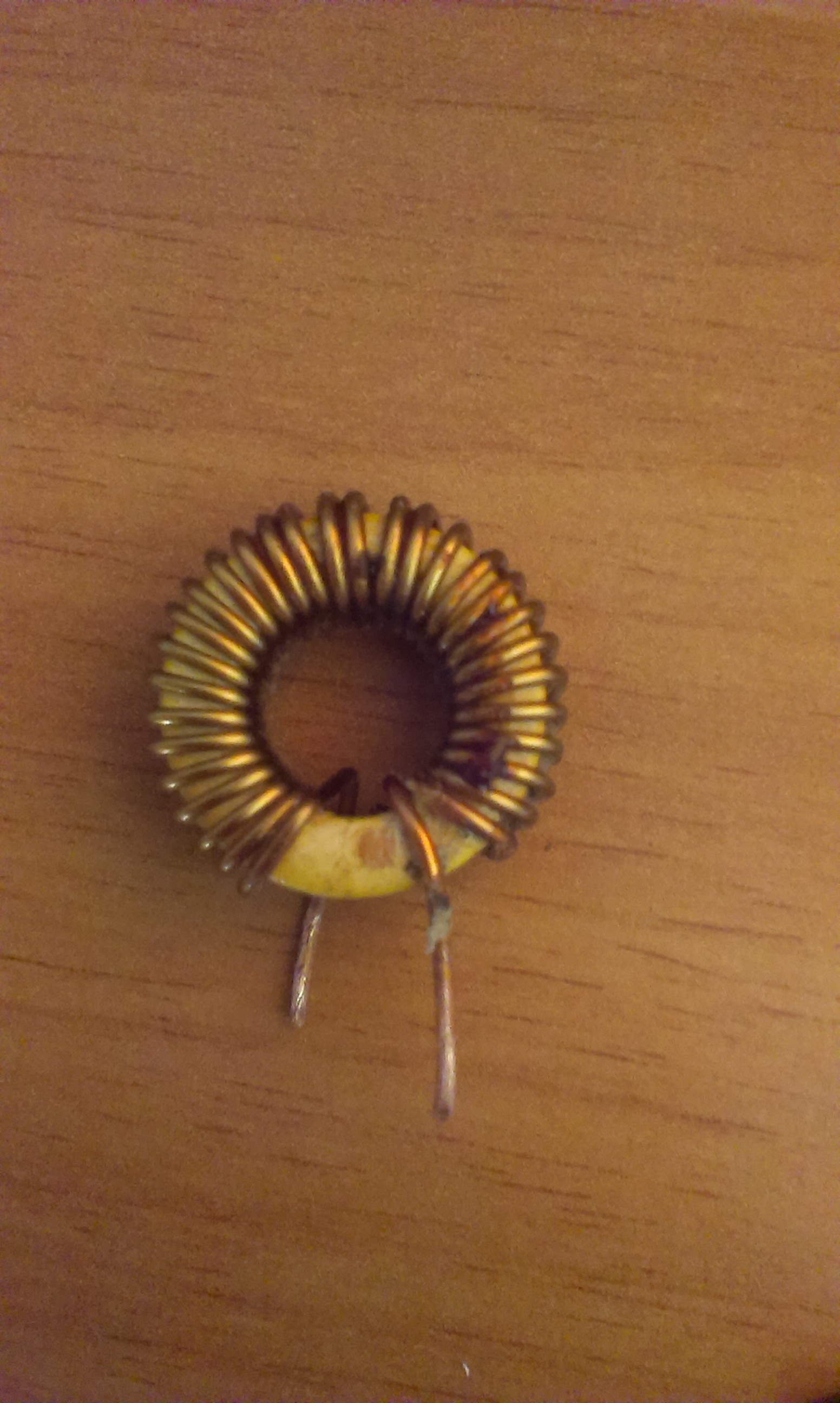 However I also tried this inductor

The diagram you're building from is basically wrong in a number of critical respects.

Firstly, the positive output of the boost is on the lower rail. This makes it much harder to follow. The return path from the boost is then not to battery ground but to battery positive! What you've actually built is a strange sort of resonant tank circuit; that's consistent with the observation of a large no-load voltage but no ability to drive actual loads.

You've also used a PNP symbol for an NPN transistor. There's no base resistor so you're potentially sinking a large current from the PWM pin.

Here is a more conventional boost design: http://reibot.org/2011/08/07/intro-to-boost-converter/ which uses a MOSFET, which is probably going to be required to achieve worthwhile efficiency.

Edit for the record: the TIP120 was another problem, Calin switched to MOSFETs which worked properly. I'm still skeptical about achieving 5V @ 500ma from this as that implies >1A input from 2.1V (NiMH?) batteries through a breadboard, but Calin now has it basically working.

Power out = power in minus losses. Power out is 300 watts therefore power in will be about 330 watts. At 14 volts and 330 watts, current in will be 23.6 amps but this is average current. The peak current will depend on the duty cycle and looking at it simplistically, for a 50% duty cycle the peak current might be about 2 x 23.6 amps = 47 amps worst case (borderline discontinuous).

Ideally you need to pick an inductor that doesn't saturate and one with a gap is going to work better. A solid ferrite core will tend to start saturating at a flux density of about 0.4 teslas. It might have a relative permeability of (say) 1000. Using B = \$\mu H\$ allows this to be estimated: -

You need to know the mean length of the magnetic field and that is found in the data sheet for the ferrite you are using. Let's say it is 100mm, this means your maximum ampere-turns is 31.8 and of course this would be unsuitable for your application because you can immediately see that it is likely your amperage and one turn is going to heavily saturate the core.

So, if you put a gap in it might reduce the effective permeability to (say) 200 and this allows more 5x H field (5x more current or 5x more turns) but inductance is related to turns squared so there is a net gain because although the \$A_L\$ value for the gapped core has gone down by a factor of 5 you only need \$\sqrt5\$ more turns to recover the inductance.

So here is my take, since this application is microcontroller based, couldn't one simply just stop the discharge of the inductor when the current nears zero?

Think about this - the only way to stop the "discharge current" is to prematurely ground the transistor in the boost device to start "charging" current thru the inductor - you have no option - to keep the inductor open circuit is to enter DCM and that is what you are trying to avoid.

The cycle for a boost converter (or flyback converter) can be: -

OK, so then what happens (in that cycle) is a tiny little too much energy becomes transferred to the output capacitor and load (during inductor discharge). This causes the output voltage to rise fractionally higher than what it would and, over a period of a few milli seconds, you might exceed the output voltage that is safe for the load. A few seconds later and you have a dead load and a few seconds later you have a dead boost regulator.

OK before you get to this, the control loop would probably have implemented cycle skipping but cycle skipping is noisier than ordinary DCM so why bother?

BTW, going into DCM isn't that bad - the line regulation of the output isn't as good but it's still quite controllable. There isn't much on the web about this but, due to the self-resonance of the inductor and MOSFET drain capacitance, once DCM is entered there is a small oscillating current in the inductor that is asynchronous to the PWM and when the inductor restarts charging it does so at sometimes a slightly positive or negative current. This can cause the noise on a simple controller such as a fixed-on-period controller.