I'm just trying out Arduino Uno for the first time with 2 blinking LEDs on a breadboard. All the tutorials on the Internet seem to use a resistor. I do know the function of resistors, but does it really matter here? These LEDs are working just fine without a resistor.

Naughty! :-). If they say to use a resistor there's a good reason for that! Switch it off, NOW!

The resistor is there to limit the LED's current. If you omit it the current limiting has to come from the Arduino's output, and it will not like it. How do you find out what the resistor needs to be? You do know Ohm's Law? If you don't, write it down in big letters:

Voltage equals current times resistance. Or you could say

It's the same thing. The voltage you know: Arduino runs at 5V. But not all that will go over the resistor. The LED also has a voltage drop, typically around 2V for a red LED. So there remains 3V for the resistor. A typical indicator LED will have a nominal current of 20mA, then

The Arduino Uno uses the ATmega328 microcontroller. The datasheet says that the current for any I/O pin shouldn't exceed 40mA, what's commonly known as Absolute Maximum Ratings. Since you don't have anything to limit the current there's only the (low!) resistance of the output transistor. The current may so well be higher than 40mA, and your microcontroller will suffer damage.

edit
The following graph from the ATmega's datasheet shows what will happen if you drive the LED without current limiting resistor: 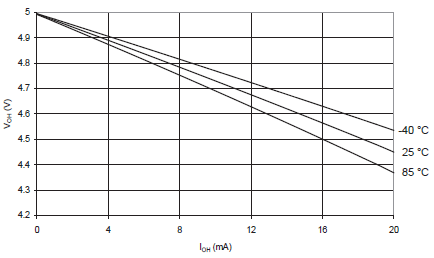 Without load the output voltage is 5V as expected. But the higher the current drawn the lower that output voltage will be, it will drop about 100mV for every extra 4mA load. That's an internal resistance of 25\$\Omega\$. Then

The graph doesn't go that far, the resistance will rise with temperature, but the current will remain very high. Remember that the datasheet gave 40mA as Absolute Maximum Rating. You have three times that. This will definitely damage the I/O port if you do this for a long time. And probably the LED as well. A 20mA indicator LED will often have 30mA as Absolute Maximum Rating.

In the second 'for' loop, i is immediately not <1, so the loop never executes.

The first thing for debugging something like this is to verify you really did enter programming mode. The most reliable way is to use high voltage program mode entry. Make sure the PGM pin is held low during this time. Also make sure all power and ground pins are connected, whether you think you are using them or not, with a bypass cap on each power pin.

To verify you entered programming mode, shift in something that should drive PGD, like the read back of TABLAT instruction (0010). Follow this with 8 zero bits, then on the next rising edge of PGC the target chip should switch to driving PGD from it being high impedance previously.

Once that is working, the next thing is to read the device ID since that is always a fixed known value. This is more complicated since you have to exectute core instructions to load the three bytes of TBLPTR, then do a read.

Since all these interactions are synchronous and you own the clock, you can go as slow as you want and observe everything on the scope one piece at a time.

It would help if you describe exactly what you think your process is of trying to perform these operation. No, I'm not going to look arduino code. There is too much between that and the PGC and PGD lines.