For a new project with Arduino I need to generate an alarm tone that needs to increase in amplitude over time if the user doesn't take action. The output would be via a small speaker.

So when the alarm condition triggers I would generate a low volume beep in the audible range, give the user some time to react, then increase the volume, wait, increase again until the user reacts. This way I don't generate a loud alarm tone from the start, which can be disturbing in a quiet environment.

Generating pulses and using a transistor or IC amplifier to drive the spaker is no trouble.

–> The issue is: how to modulate the amplitude of the speaker sound?

My limitation is that while sounding the alarm, the Arduino still needs to to other stuff, so I can't stall it in a complicated routine to generate tones for example by doing some fancy PWM that then gets filtered to deliver a signal with different amplitudes.

I could use one pin to generate the base frequency signal, and have 3 pins available to steer some external circuit to modify the amplitude, like this:

ADDENDUM:
This is the solution I had tried out already, but the volume levels are not repeatable from one unit to the next, so I would like to avoid adding a trimmer pot.
D13 generates a square wave with the audio tone. The other outputs pipe this tone through the resistor ladder via the AND gates. 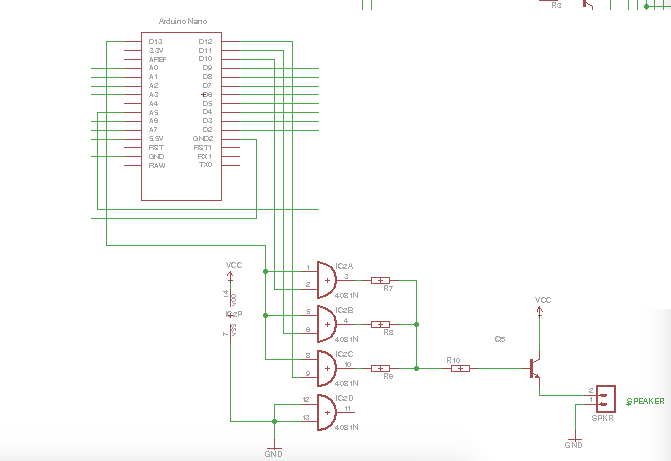 Your question shows a PWM unit, followed by an adjustable gain stage. This isn't a very obvious form to use, but it might work.

Traditionally, you might use multiple PWM units with different output drive strengths (using resistors), in effect building a DAC.

What you have built should work if you combine the PWM (for switching) with a programmable current source (for amplitude). For the current source, you can use 3 current mirror circuits in paralell, switched by your 3 amplitude controls. Typically you might choose a log-scale for each switching step.

You PWM output can be used to sink current, the 3 current mirror stages source current (and control the amplitude).

The AVR microcontroller used on Arduinos is easily fast enough to do the audio mixing. The problem will instead be reading the data from SD. The SD protocol permits reading only in sector sizes (512 bytes on current cards), and you generally don't have much RAM to store the data in. At 22kHz 16bit mono audio, that corresponds to 11.6ms so you can probably permit joining the samples on a sector basis, but that still means reading 430 sectors per second over an SPI port that cannot do DMA. It is absolutely possible but may present a notable coding challenge. If your set of samples is fairly small and static, it could be better to load them into an SPI NOR flash which is more easily read.

There are a couple problems with your amplifier circuit:

1) There is a 10 Ohm resistor (R1) which limits the current which can be drawn by the amplifier. There is no reason for this resistor.

2) Your input is not properly A/C coupled. Remember that if you have a DAC like yours which is single supply (in the sense that it is powered from "0V" and "5V") trying to output audio, audio signals go both positive and negative (e.g. representing the displacement of the speaker cone, which goes both in and out). This means inevitably the true "zero point" of your audio signal out of your DAC must be between your voltage rails (typically, it is chosen at the halfway point of 2.5V). However, sending this offset out to your speakers causes distortion and possibly damage to the speakers (since it means that your speaker cone is always driving one way), so we want to remove this offset in the amplifier via a high-pass filter.

The input side of your amplifier as drawn is not a high-pass filter, in fact it acts as a sort of low-pass filter (which makes the problem worse), this is probably the source of your distortion. Try using the circuit below, or a variation of it. You must choose capacitor C1, C2, and C3 such that the lowest frequency you care about is passed by in the input filter such that \$f_c=\frac{1}{2\pi*(R3||R4)*C1}\$. In general, a larger capacitor is better, so long as the above condition is satisfied "in the ballpark". 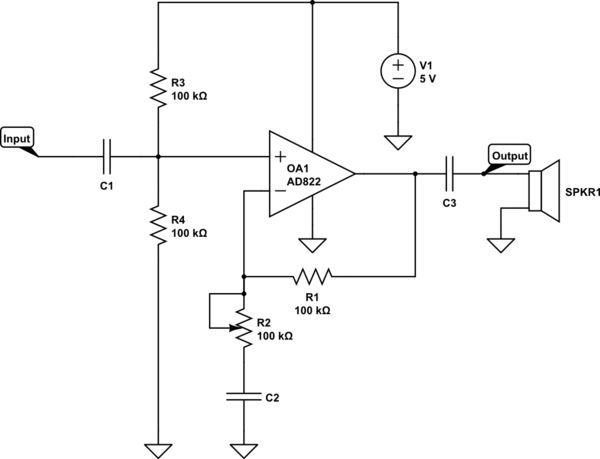