I am looking at the TinyDuino Schmatics (PDF) and Eagle BRD/SCH from Tiny-Circuits (an open source project) to put together Bill Of Materials. I am interested in creating my own version of this awesome board; this will be my first PCB. I am not an EE, however, have been working with Arduino for a long time. I am looking at digikey to find the corresponding part for each component below and I am left with a few questions. I have attached an image of the TinyDuino with rainbow labels I put myself (which could be wrong?).

ANY help is very much appreciated!

After all the awesome comments/answers (special thanks to Shannon Strutz, PeterJ, Connor Wolf and last but not least Bill Heughan), I have updated the list below. You can also access the DigiKey cart here with WebID: 105367708 and Access ID: 5693 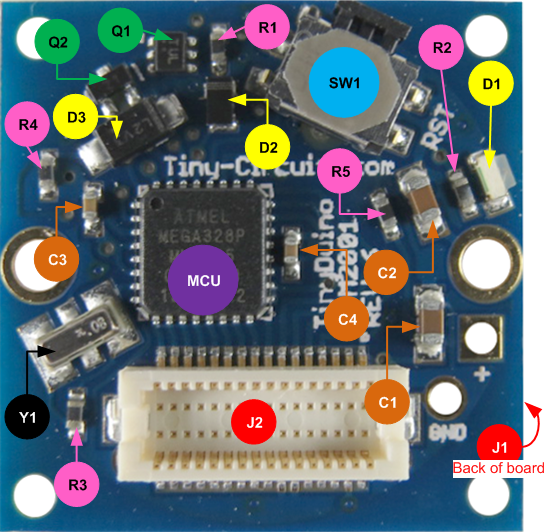 The Eagle files from the TinyCircuits TinyDuino Processor Board GitHub repository do contain some BOM information. The device and part number fields look like something they've allocated themselves as an internal stock code, they are fairly sequential numbers prefixed with AS-ITM- so I've excluded them.

The remaining information does include some component tolerances and other information that may be useful to confirm your selections but it looks like it's been pretty well covered by others:

There is no right answer to this question in the way that it is phrased, other than 'Maybe'.

It all depends on the construction of the PCB assembly (PCA).

Many modern components, especially the very small ones, don't have proper markings or sometimes any markings at all.

Instead of marking their identity, they have a manufacturer code. E.g. (And this is not a true example) instead of SN74AVC1G14, it might have just 'Y14' printed on it as there is not room to print more.

Also crafty manufacturers either use devices that they have been sourced with markings removed, or remove them themselves, e.g. by scratching them out.

Or, in the case of many passive components, they normally have no markings. In this case it is often possible (depending on their circuit connections) to measure the component in circuit using a multimeter, though often this is not accurate enough and you need to remove it and make a measurement out of circuit, perhaps using an LCR bridge.

Some PCBs have passive components, (inductors, capacitors and resistors) embedded inside. Although these would not appear on a BOM (bill of materials), they are still part of the circuit. This make reverse engineering the circuit (and not the BOM which is what you want) very difficult.

Lastly, some components are programmable, so even if you know what they are, you can't easily read their contents, once programmed they become a different part. Sometime these can be read using specialist kit, sometimes reading them is impossible.

So it is possible to reverse engineer a BOM from a PCA image if:

I had the same problem. I found a blog post that deprecated the OPL or CPL parts numbers in favor of the more universal Manufacturer Part Number.

I solved it with the following steps: 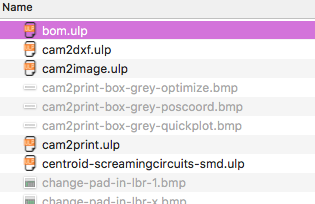