I was instructed to set up a resistor on the negative side of the LED and pulling it to ground. I'm confused why we are implementing a resistor on the backside (negative end) of the LED. I always thought we put resistors before our load (LED) to limit/control current flow. Therefore, I'm confused why we are putting the resistor between the cathode (negative end of LED) and ground. To me it seems like this resistor isn't doing anything.

I don't know if it helps but on my board the positive side of the LED is connected to PIN 13 and the negative (cathode) end is going to the resistor then to the ground on the breadboard then to the ground pin on the Arduino board.

I apologize for the picture as it's the best I can get it at the moment with what I have available to me. 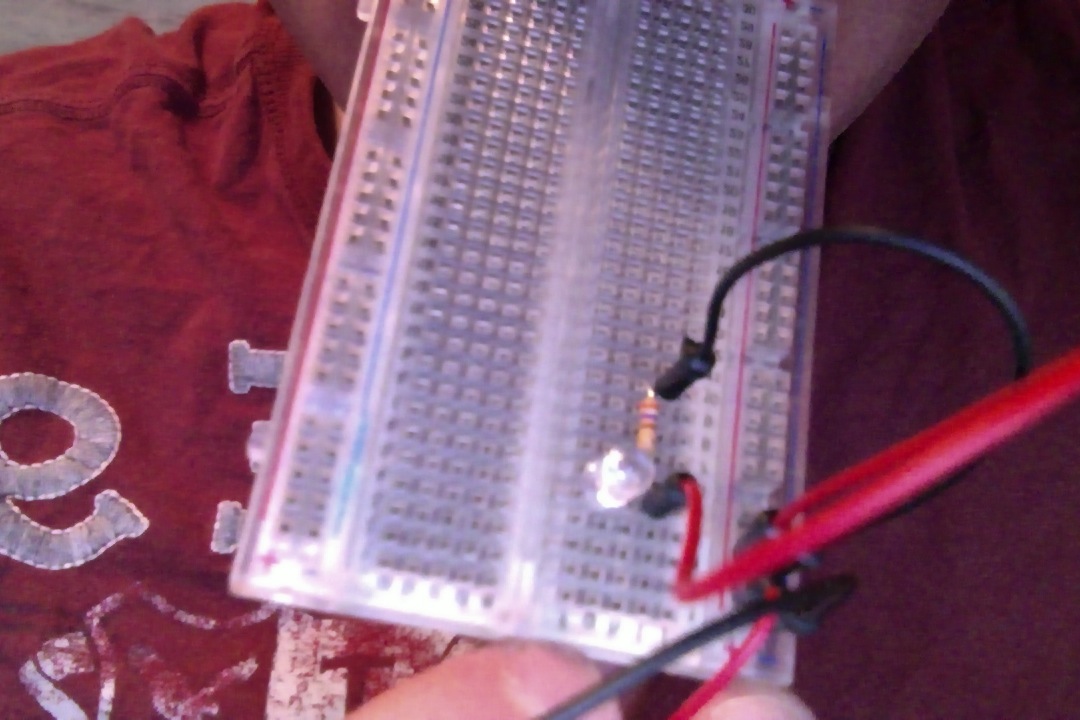 While driving a load with a microcontroller, you may add resistors on either side. This is because the current entering the LED and leaving out of the LED is the same. So if a resistor is used on the high side or low side, it would limit the current. They can be used on either side and either way because they are not polarized.

In such configurations, resistors limit current flowing through an active component (LED in your case). Considering Kirchoff's Law, it doesn't matter if the resistor is on the positive or the negative side of the LED. It would limit the same amount of current irrespective of the positive side or negative side of LED.

Electronic – Which side should I put the resistor

First the switches' resistors. Moving one of them to the left side of the switches is pointless: it would just be between +6 V and ground and draw a constant low current. The switches will only see the 6 V, and not even know the resistor is there.

The 4511 is a CMOS IC, and these have the property of having a very high input impedance. So high that the voltage on it may vary all by itself if you leave it unconnected, what we call floating. At best it may change the number on your display, worst case the input may get damaged. When you close a switch this will make that input high, and then there's no problem.

But when the switch is open you want that input to go low. You can't simply connect the pin directly to ground, because closing the switch would short-circuit the power supply. So you use a resistor to bring the input to a defined, low value. When there's current flowing through a resistor it will cause a voltage drop due to Ohm's Law, but with the high-impedance input there's nowhere any current can come from, and then the voltage across the resistor will be zero, so that the input will be at 0 V level.

Here they use 10 kΩ resistors, which is OK. A lower resistance value will give you a more solid connection to ground, but also cause more current when you close the switch. Closing a switch will bring that input to +6 V, and then there will flow a current through the resistors: 6 V/ 10 kΩ = 0.6 mA. That's rather low, but in very low power circuits they may use higher resistance value; 100 kΩ is still OK, and will further reduce the current when switches are closed.

Then the display's resistors. If the LEDs would be all exactly the same you could indeed replace the 7 resistors by one on the cathode side. But this world is not perfect and ther may be small differences in LED voltage. If one LED has 2 V and its neighbor 1.95 V the current will go for the latter. LEDs do have an internal resistance which will balance the currents a little bit, but the difference in current, and hence brightness will still be there.

And as Oli noted it gets worse. The voltage has a negative temperature coefficient, which means that it decreases as temperature increases. The current causes power dissipation in the LED, which increases its temperature. Then the LED with the highest current, which already had the lowest voltage, will see its voltage decrease even further, so that the current increases even more. This may lead to what's called thermal runaway, and only the series resistor and the small balancing effect of the LEDs' internal resistance are there to stop it.

Giving each LED its own resistor solves all that. The current will be eather zero, or 10 mA, no matter how many other LEDs are on, and no matter the small differences in LED voltage.

Why is the digital out acting as ground on arduino

When an IO pin is configured as an OUTPUT, and is set LOW, it is effectively connected to ground through a MOSFET.

You get a reasonably low resistance between the IO pin and ground.

As long as you don't exceed around 25mA through that pin, then all is well, and that technique is often used for multiplexing of LEDs etc.