I am currently designing a board centered around the ESP32. I want to implement an auto-program circuit for convenience's sake, because I don't want to hold a boot button each time I want to program it.

My question is: Why is the below circuit that most ESPs use, designed the way it is? I am asking because this circuit fails to initiate the upload more often than I would like and I end up having to press the boot button. So I somehow think there is something with the design that causes this, as I had this problem with more than 1 ESP at different times.

Why not use something like this for instance? This is a thought experiment I made using the logic table and KV diagrams.

From this, I have developed this circuit: 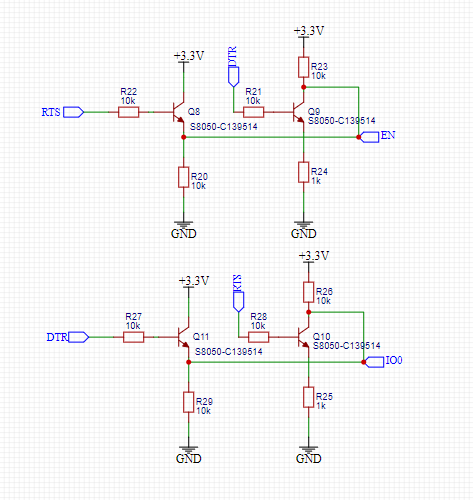 So I know this can probably be done better, but maybe this will solve the reliability problem that I have. Or maybe I should use the relation I found on (1) and (2) to build the same circuit using OR-Gates. In any case, any thoughts on optimization or help on the matter would be appreciated.

This kind of intermittent failure can be a timing problem, but it can be a power supply problem. Since the latter is easier to debug, why not start there? If you did connect all the GND/VCC pins correctly I'll designate the HT7733 regulator as a suspect, since it's pretty much the only different part between the board that work and the one that doesn't. Well, that and the two bipolar transistors, but any BJT should work there. And I'll assume you didn't use Z5U caps.

Personally I'd be wary of a LDO that gets its transient response pictured at 4ms/div and 2V/div on the output. These settings are so huge it looks like they have something to hide. What looks like a tiny blip on Vout is actually a huge dip from 3.64V down to 2.76V, and that happens at 40mA which is much less than what ESP32 consumes. That will crash the microcontroller, or the USB-serial chip, or both. It might even corrupt the Flash if voltage drops while it's writing. 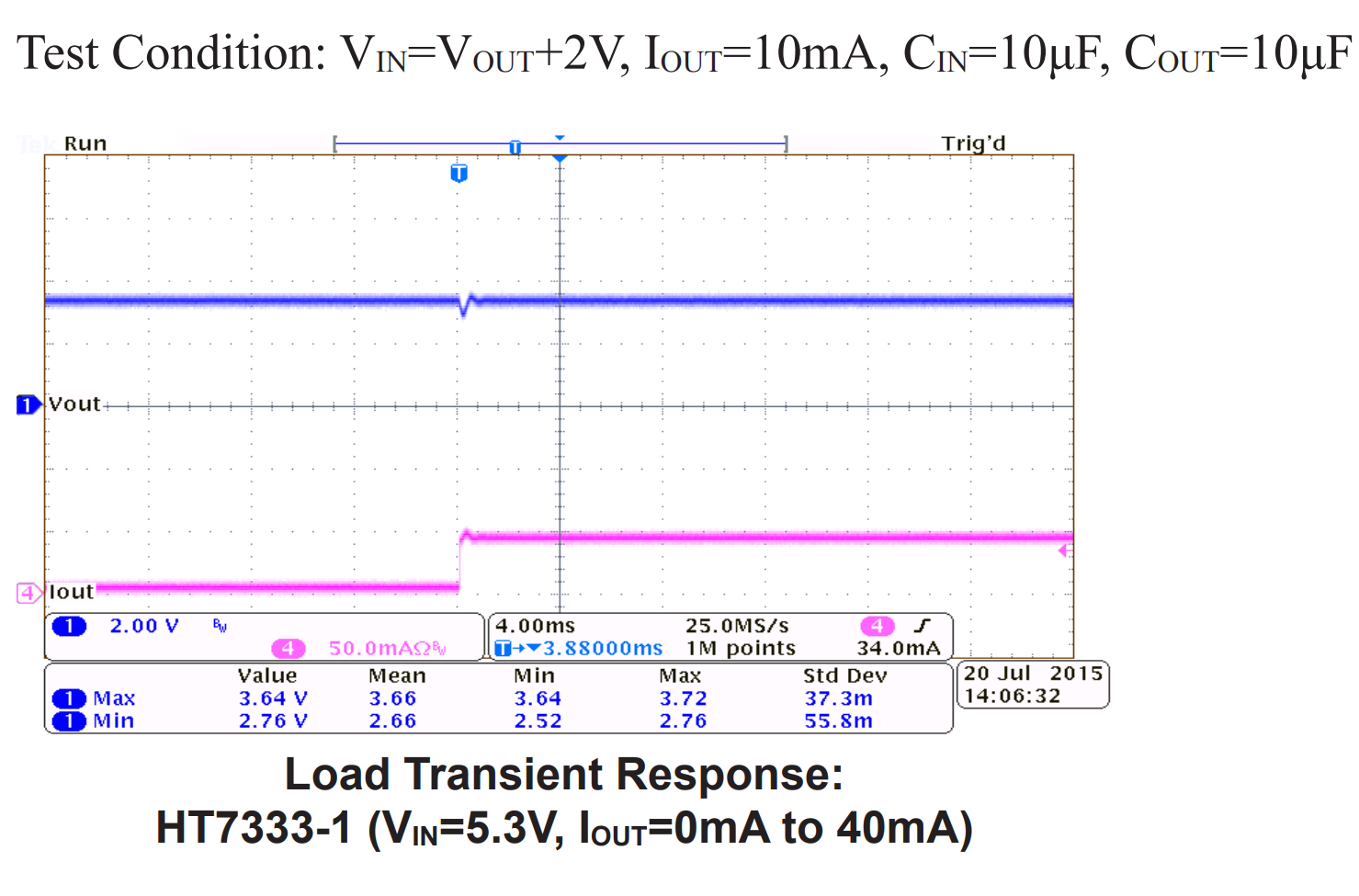 To check if this is the cause, first check the 3V3 rail with a scope to check if it stays within acceptable voltage range. Then add a huge electrolytic cap on the 3V3 rail. If that fixes things, you need a better LDO.

Here's AP2112 for comparison. Note the different scales, 10mV/div an 200µs/div, that's much better. Note this isn't a fancy chip, just a normal basic LDO, it isn't even more expensive, but it does have higher quiescent current. 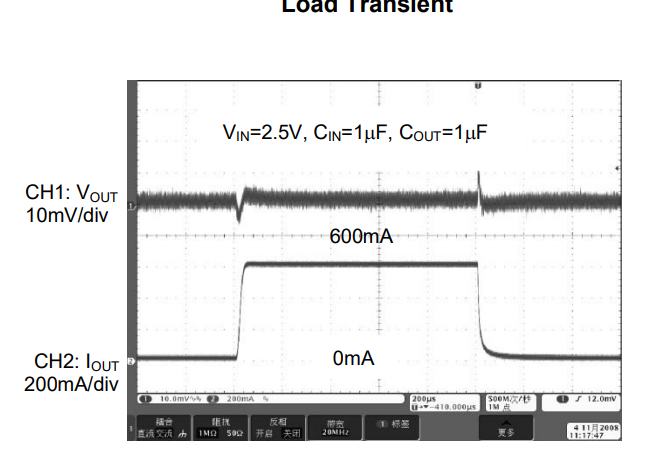 EDIT: how to quickly select a LDO for this.

You're using ceramic caps on the output. So, Ctrl-F, "capa", ENTER. If it highlights "stable with ceramic caps", good. If it specs a minimum ESR value like 0.1 ohm or something, since your 10µF MLCC has an ESR below 0.01 ohms, next. If it says "tantalum" or "aluminium cap" on the output (which is another way to say "high ESR") but doesn't explicitly say "ESR" and doesn't say "stable with ceramics" then next.

For example this is the case with AMS1117. It says "22µF solid tantalum". Why put an expensive tantalum cap after a super cheap regulator? That's because it's an old chip design from the days when big ceramic caps were expensive. Now ceramics are cheap, so the new LDOs are pretty much all designed for ceramics. Cross-check with LM1117 datasheet:

So... next. Unless you put an aluminium cap, in this case it will work. With just ceramics it'll be unstable.

Note this is a different problem than HT7333. HT7333 is micropower, micropower regulators tend to be slow, and this one is extremely slow. It's probably designed for low power stuff that draws more or less constant current. AMS1117 is not slow, in fact it's pretty good, but its topology makes it unstable with low ESR caps, so it'll oscillate with ceramic caps. Result is the same, your micro will crash.

So then you can check the rest of the specs. But really, if it's a one off, unless you have supply issues, it's not worth it reading 20 datasheets to select a 40 cents part. Just stick a 100µF cap, don't pay $20 postage for another LDO...

If the tiny is running a sketch then it must already have a bootloader.

I think there are a lot of factors to be wrong here because the tutorial was written pre arduino 1.0. I think the 1mhz one is a problem and best avoided for now. The tin85 w/ Arduino ISP sounds to be pre-arduino 1.0 and needs to compile correctly.

In a few days I will have some time so if you haven't fixed it by then I hope to give you some info.

First I will take 2 arduinos, one as ISP and one as normal arduino. We need to prove the ISP sketch is working correctly when uploading blink to a 2nd arduino.

FYI: You mention the arduino.h, in versions earlier than arduino 1.0 the file was called wprogram.h, arduino 1.0 also expects a few other differences. If the tiny85 is including wprogram.h I think it will be a problem to also include arduino.h

If you have some time spare why not go onto the arduino.cc and down load version 0023 of the arduino IDE. (All of the older version of arduino are available). Upload the Arduino ISP example to the UNO using 0023 then try the upload to the tiny85 (w/ arduino ISP) for the blink sketch. I would expect 0023 to work exactly like the video, so if it fails you can look to the wiring of the tiny85 for the problem. It it works we will know we need to update the tiny85 hardware folder to arduino 1.0 format

If it works in 0023 then you should follow Deans instructions above for Arduino 1.0.1.

The only way I can find to reproduce the error you see is if I attempt to "Upload using programmer" when the programmer is set to "AVRISP". If I upload the ISP sketch to an arduino and attempt to program an unconnected tinyxx I get different errors.

So sorry if these are time wasting questions but.. are you clicking "Upload" in the arduino ide or "Upload using programmer"? You should be clicking "Upload" after selecting the ATTiny (w/ Arduino ISP) as the board.

It is a bit confusing but the board definition for ATTiny xx (w/ Arduino ISP) forces the correct programmer settings for the normal arduino "Upload". In the arduino ide, the menu item "Upload using programmer" uses whichever programmer is selected on the "Tools>Programmer" menu, in this case probably AVRISP mkII which, if unconnected, will produce the error you have reported.

Always getting ser_recv() on upload

While building an arduino I experienced similar issues. It came down to two things:

2) Bootloader file I used was incorrect, despite the fact that it downloaded perfectly fine and transmitted and all the instructions told me to use that one. The issue was something in the configuration that apparently changed the baud rate and hence the BSL failed.

I recommend you use a logic Analyzer or Oscilloscope to look at the lines and see what is going on. Some of the things you need to look for is:

1) No Data and lines don't start in their default state