I thought of an idea recently, and I wanted to know if electrical engineers agreed with my theory.

I have a smartphone.
Recently I bought a power bank because I found my phone's battery not holding up long enough.

Now here is what I thought about while charging my power bank and my phone.

If both batteries (of my phone and powerbank) could in theory fill up 1 mAh/minute and both my phone and and the power bank are connected to the outlet, and are actively charging, I'm basically charging the two batteries at an effective 2 mAh/minute.

If both my phone and my battery pack could hold 1000 mAh, I could charge both half way to 500 mAh and still have an effective 1000 mAh at half the time it would take me to charge the phone alone.

So if I bought three banks then together with my phone I could get the same effective 1000 mAh in just a quarter of the time!

So if this works in theory: Why not divide the phone's battery into hundreds of separate banks to get hundreds of times the times the charge rate? What prevents this in practice?

It doesn't work that way. One of these two issues will get you:

If it were really so simple, they'd be doing it.

Current will flow between the batteries based on the difference in terminal voltages, not based on the difference in State Of Charge (SOC), and certainly not based on absolute capacity (equal mAh remaining). The terminal voltage vs. SOC curve is highly dependent on the chemistry and manufacturer of the cell, so don't assume that two cells will behave the same even if they have the same nominal voltage. A typical voltage vs. SOC curve for a Lithium ion Polymer cell looks like this: 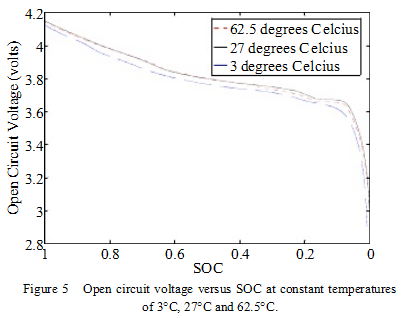 In short, while you might succeed in moving a little charge from a full cell to an empty cell, current will most likely stop flowing between the cells well before they have equalized SOC, and they'll never end up a the same amount of stored energy remaining given that they're different sizes.

If you want to use one battery to charge another battery, consider a boost regulator in conjunction with a charge management IC. In your application, you would use a boost regulator to get to 5V from your external battery, then use your normal USB charger to leverage the existing charge control circuitry for you phone. You won't even void your warranty!

There are at least two key factors reducing the effectiveness of the battery-driven charger:

Observations on my various phones and other devices indicate that they go from a power-efficient mode to high performance mode (processor runs faster, screen brightens up) as soon as the charger is connected. While this could perhaps be prevented through power management changes in the device, the default behavior is power-hungry while charging.

For sizing a battery powered charger suitable for charging a mobile device, I would suggest a factor of at least 2, preferably more, in the mAh rating of charger compared to the target device.

Working the calculations the other way around:

Thus, clearly the 2xAA charger will not have sufficient power to fully charge the tablet, even when the tablet is powered off.

While it is not feasible to estimate power consumed by the tablet during operation, a totally "sounds like a good guess" assumption is in the vicinity of half to two-thirds of available power feed.

Thus the tablet should be expected to charge up to between 858 and 1300 mAh worth, before the AA cells in the charger are depleted. The observed figure is around that figure, so nothing significantly amiss in the behavior described in the question.