I have an update. It seems there are multiple posts on Intel's forum by people reporting bricked Compute Sticks even though they were using the factory power supply. I followed the recommendation to reset BIOS by holding the power button for 3 seconds and… it came back to life! That is the third Compute Stick, the one for which I was using the setup with the electronic switch. The previous two are still dead. So, it seems that these computers have some issues with power supply. And the voltage spikes damaged permanently the first two, while after fixing the voltage spike, the last one suffered from corrupted BIOS but it was possible to recover it.

I am using Intel Compute Stick, which basically is a single board computer, and I am experiencing problems powering it from a battery. 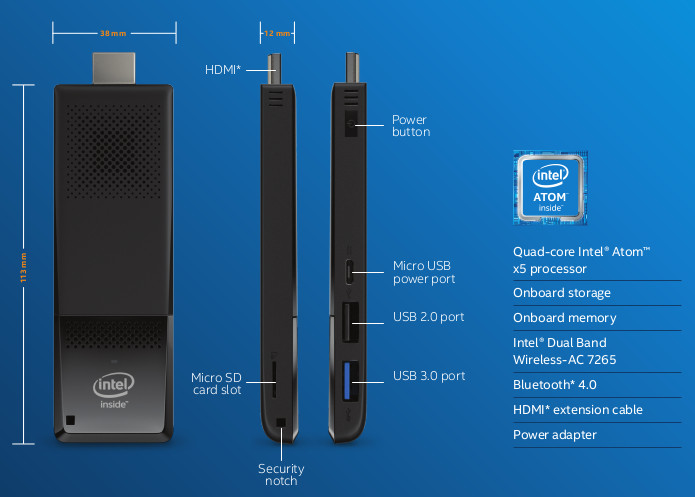 The computer is powered via a Micro USB port. It comes with a wall power supply which has 5V 3A output. I measured the actual output to be 5.16V. The maximum power consumption I measured to be 1A in my application.

Here is what my initial setup was for powering from a battery:

So, my second setup was:

Below are pictures from the oscilloscope, the first two are for the first setup without the switch and the rest is for the second setup. So, it all seemed to look just fine. The actual converter output is around 5.28V which is just slightly more than 5.15V and there are no voltage spikes. At this point I decided to make the final test by connecting the battery and switching the switch on until the initial welcome screen was displayed and then switching back off. I planned to try 200 such cycles, and after 130 cycles Compute Stick died…

So, I still must be doing something wrong, but have no idea what this could be at this point. As far as I can tell, all I have at this point is constant 5V power supply from the converter and I am just opening and closing the switch.

It looks like the Intel computer is really sensitive to overvoltage. You could use a two stage power supply for it - a buck converter to drop the voltage down to, for example, 7 volts and then a linear regulator to provide clean and spike-free 5V. The intermediate voltage (7V in my example) should be just slightly higher than the minimal requirement for the linear regulator for best efficiency (though efficiency won't be that great anyway).

I used LM338K to make a car power supply for my Viliv N5 palmtop which has the same problem.

Did you happen to use the "heavy duty" 9 volt battery? They have an amazing capacity of only around 50 mAh! So if you put any real load on them, their voltage will drop quickly and they will likely heat up as well due to high internal resistance which is tripled when put 3 in series. Take away the load and the voltage will go back up some.

The same will happen to a lesser extent with alkaline 9 volt which have a capacity of around 300-400 mAh.

You would be better off with lithium batteries, but if you want to keep it simple, consider AA, or C, or D alkaline in series.

You should be able to replace your existing brick power supply with a 12V lead-acid battery with full-time charger attached. The problem is finding a suitable charger.

Most car-battery chargers that you can purchase at automotive stores are NOT suitable for long-term use like this. Either they are not a proper 2-stage or 3-stage charger or they don't have sufficient current output when in float mode.

You mention that your unit needs about 19 Watts. That's about 1.5 Amps.

Check your local suppliers to see if they have a suitable battery charger. You want a unit that can be left connected to the battery all the time and be able to supply at least 1.5 Amps continuous while in float mode.

There are certainly suitable chargers available on-line from a huge variety of suppliers.