I am in the process of designing a PCB that is powered by a 10V / 1mA supply from a fandeck (incorporating EC/DC fan motors).

One of the functionalities include having continuity between 2 pins on the PCB (Volt free contacts), which are connected to an external controller (Master). Since the supply can only supply 1mA, I am using 2 n-channel Mosfets for their high input resistance. However, I don't know how to switch them since they're connected to an external circuitry with different voltage references (grouds), and the mosfet switching works around the gate to source voltage (Vgs(Threshold)).

One idea I had was to connect the Mosfet sources together and put a 1nF cap to ground so the voltage from the MCU would be with reference to both sources of the mosfets. 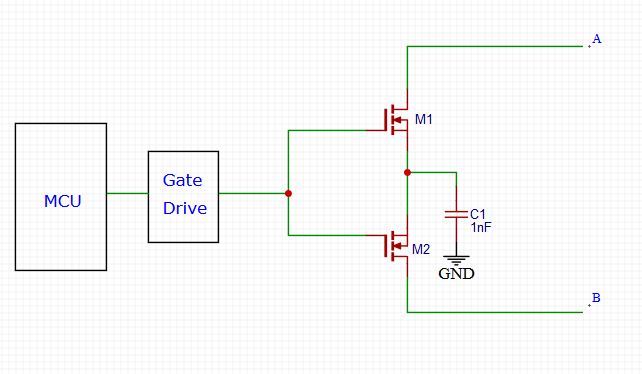 I also saw the attached picture in an application note from Texas Instruments (Application Report SLVA948–December2017), But I don't have any prior experience with charg pumps and am a little bit worried regarding their current draw and I also don't know the voltages that master controller might exert to check continuity so i don't know how higher the voltage should be when fed into the gates. 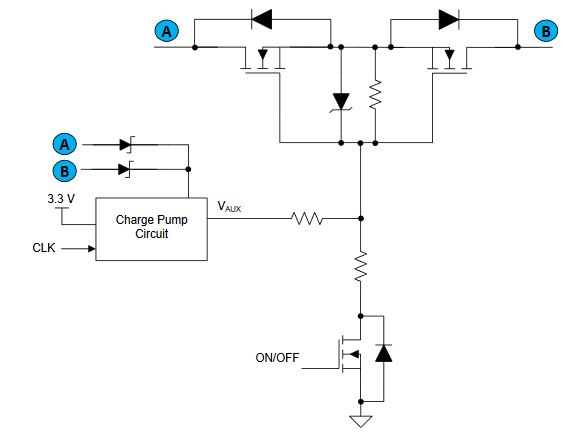 One other thing that comes to mind is just connecting one of the contacts to ground (PCB ground), However I am not certain this would work either. 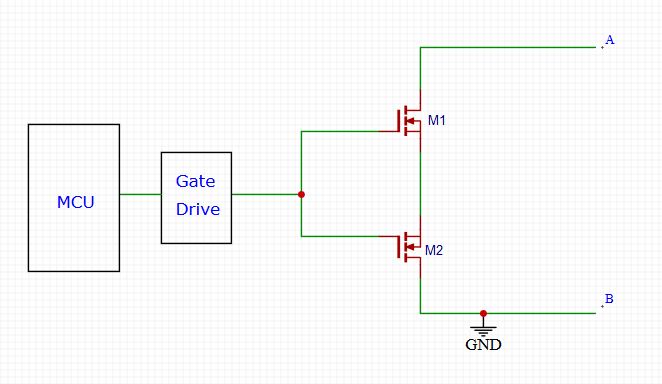 I am already familiar with gate drive design so that is not an issue. Is there a better way of doing this with less current draw?
any help would be highly appreciated.

Many thanks in advance for your time.

If you are able to convert this 10V/1mA (1) to a bit more mA @ 1V or 2V you may want to consider using a "photovoltaic relay" or "solid state mosfet relay": 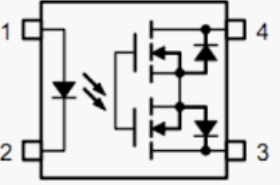 where pins 3 and 4 are the isolated terminals A and B.

You should check the maximum required "trigger forward current" or "the minimum control current" or whatever description that tells you which current you need worst case to turn on the internal LED.

In my small research I found a few that need about 2 to 5 mA. The G3VM only needs 0.2 mA typical and worst case 3 mA.

(1) It's not clear to me, but it seems this 3V3 regulator mentioned in the comments is such an example.

You should never leave the gate of a MOSFET floating like that. Static charges can easily puncture the gate oxide, permanently damaging it. Tie a high-value resistor (1 megohm or so) between the gate and the source.

Yes, the gate is very well insulated from the drain/source, but there is a significant amount of capacitive coupling between them, which is probably what you're seeing on your scope.

We can make this work well for you.
But attention must be given to the changes required.

You are trying to use the transistor in an unnecessary mode in order to attempt to eliminate a very common design requirement which simply needs to be faced.

ie you do not "need" a higher Vgs FEt - you just need to drive an otherwise suitable FET correctly by limiting Vgsmax to a voltage which is enough to drive the FET correctly worst case -but still less or much less than Vgs_absmax.

In addition, you need to specify switching speed requirements and address them explicitly as part of your design.

You ask (in a comment) "If we are using the PMOS for fast switching applications (~10μs),..." -> if you are using timings of the order of 10 uS (and you do not give any indication of switching speeds in your question) then the passive 30k R1 resistor is going to utterly mangle your switching waveforms. Without looking at the datasheet you can use a rule of thumb gate capacitance of 1 nF. That with 30k Rgs for turn off gives a time constant of 30 microseconds. Zener response times are far from your greatest problem.

Vgsmax of the MOSFET only needs to be safely greater than the maximum Vgs you need for full enhancement of the MOSFET under the worst case conditions of interest.
Very few MOSFETS need more than 12V Vgs to be driven as hard as is possible, so a Vgsmax rating of 20V is very acceptable.
By making R1 = R2 you reduce Vgsmax to about 12.5V.

VGs of 10V (actually -10V) is the maximum you need to fully drive the FET worst case.
Gate capacitance appears to be comfortable under 1 nF. Better - use the gate charge curve at top right of page 6 to see what gate current you will need to remove the gate charge at the Vgs you wish to work at.
Note that they only specify Vgs up to 10V on this graph, and that gate charge is substantially higher at high Vgs levels.

"At a guesstimate", using 1k for R1 and R2 would probably achieve switching that is in the order of fast enough, and Vgsmax can probably be less than 10V allowing even smaller R1 - so lower RC time constant and less charge to remove as well.

To design this driver possible we need to know:

Maximum switched current.
Switch timing waveforms - on or off for how long?, what rise & fall times needed and why?
What is the load? (resistive, inductive, heated filament, ...?) Anything else important that will change the question when we know about it.

Note that FET gate voltages want to be kept well away from Vgs_abs_max. The gate to channel interface is an oxide layer whose thickness is measurable in "atoms thick" and can be broken down by a whiff of overvoltage if unprotected. Driving with say 10V abs max and then providing a say 12V or 15V reverse biased zener connected gate to source and physically close to the FET. With a load with any inductance, adding this zener may transform reliability. This is because Millar coupling from Drain to gate can otherwise wreak overvoltage havoc on the gate oxide. (Ask me how I know :-) ).