BMA180 accelerometer can be either SPI slave or I2C slave. The pins for both buses are shared.

Here's a failure mode, which I'm concerned about. Suppose, BMA180 is on the SPI bus. There is also another device on the same bus with it’s own chip select. Suppose, SPI bus master is communicating to that other device. CSB for BMA180 is high, so it’s I2C should be enables. BMA180 sees clock edges on SCL (SPI's SCLK) and bits on SDA (SPI's MOSI) flying by. What if some of these bits look to BMA180 like a start of a valid I2C read transaction, and BMA180 starts to output data and clobbers the existing SPI transaction? How would the design of BMA180 prevent that?

This is a matter of curiosity. I haven’t experimented with these issues yet. I will be using BMA180 on SPI.

Any suggestion, insight or reference is really appreciated!

Update. Found something in the datasheet (see 7.7.11). It recommends disabling I2C by setting the dis_i2c bit, if communicating with BMA180 via SPI.

When SPI interface is used, it's highly recommended to set dis_i2c to
1 to avoid malfunction.

BMA180 has built-in EEPROM. Register contents can be stored in the EEPROM and automatically loaded on power-up sequence. So, it's possible to make BMA180 ignore I2C completely and always.

Update. L3GD20 gyro is another IC, which shares pins between I2C and SPI in a a similar way. It doesn't seem to have a bit setting for disabling the I2C mode. So, it would require an OR gate like ADXL345, which @markrages brought up.

I've seen exactly the behavior you're afraid of on an ADXL345, which uses the same I2C/SPI selection scheme. I had another SPI device that used different clock polarity and it happened to emulate an I2C start code, the ADXL345 tried to talk out of turn as I2C. Bad news.

I carefully rewrote the SPI as bit bang instead of using the peripheral, making sure to not change the MOSI line while the clock was high. (This is the I2C start condition.) That seemed to solve things.

If I was starting from scratch, I would try to use I2C bus instead or a dedicated SPI port for the ADXL345.

Apparently I wan't the only one to encounter this. This paragraph appeared in a later revision of the ADXL345 datasheet: 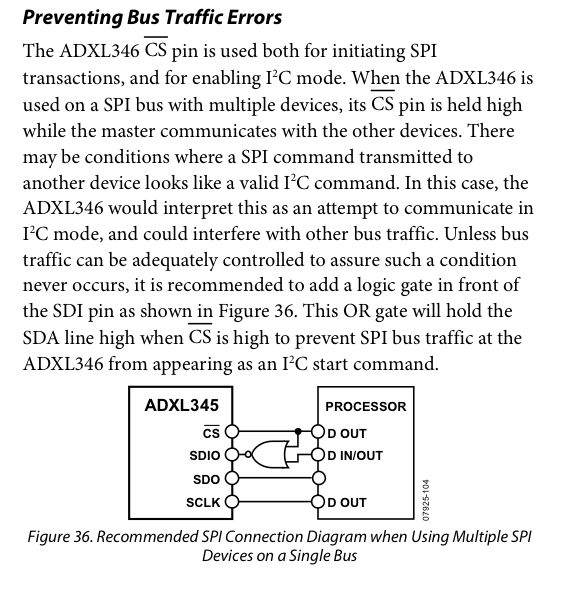 I don't agree with Madmanguruman's statement: "For both 'normal' I2C and 'normal' SPI, each slave needs a direct connection to the master, so all the slaves are in parallel regardless of the physical placement of the devices." Shift registers are very often wired in series, which makes a big loop that requires several shifts to circulate the data. That's just one example of a valid series connection and there are many more. Parallel is likely more common as I'll explain below whenever the slave devices aren't simple or literally shift registers. How you do it completely depends on the requirements of your design as well as the functionality of your slave devices.

If you connect everything in parallel, now you need a discrete chip select for each slave. The capacitance of the data signals should be trivially higher in this configuration and the clock signal capacitance is unlikely to be drastically different.

As far as routing goes, it probably won't matter as long as you're staying below 100 MHz or so. Higher frequencies start to introduce other issues. Regardless, there are plenty of reasons to go either way. It can certainly depend on your firmware constraints. Edit: As pointed out by MartinThompson, if your route is long with a strong (fast edge rate) driver, it's possible that reflections can cause issues. If you're making a multi-drop route and you expect fast edge rates, terminating the signal should significantly help. This could be another conversation, but suffice it to say that you can add series or ground referenced terminators to absorb the energy and prevent reflections.

For example, many microcontrollers will allow you to interact with SPI devices using DMA. If all of the slaves are on the same chip select, it's less code to communicate with all of them, but the latency is higher as you have to shift more data to complete the transaction. Slaves can also signal that they want to transmit, but since the master generates the clock the series connection can cause some headaches here. If you don't care about that use case, though, then wiring in series will simplify the DMA configuration. It's possible to use DMA to communicate with multiple peripherals by embedding the chip select in the data, which causes the DMA controller to handshake with the appropriate slave. You may not even have DMA, but I thought I should explain this to give you an example of why a series configuration may be advantageous in some circumstances. DMA trivializes parallel connections as well, to be fair, and quite frequently parallel connections are much more desirable in this type of situation.

Wiring in parallel is probably the more traditional way to do it based on my experience if the slave device functions at a higher level than simple shifting. I wire shift registers in series all the time, but I frequently attach multiple slave microcontrollers on the SPI bus in parallel so they each get their own chip select and slave select (the slave select is allocated for slave -> master communication, which basically says "hey I need to send data, give me a clock").

Lastly, you can't wire I2C in series unless you want to use different I2C buses for downstream devices. I2C requires that all devices be connected in parallel. The only thing you have to care about electrically is that you picked the right value for the external pull-up resistor. Because there can be many devices (7 bits worth) attached to the I2C bus, a weak pull-up could cause the bus signals to be metastable from the perspective of everything that's watching the bus for incoming data. You want to make sure the SDA line is firmly high before the next clock cycle and you do that by properly sizing the pull-up resistor.

The datasheet says that internal pull-up current is 50μA min and 400μA max. First, look at the huge variability of the pull-up current. Second, even 400μA is too weak for I2C. Even a 2.5kΩ resistor with Vcc=3.3V would generate a 1.3mA pull-up current.

Related threads:
What happens if I omit the pullup resistors on I2C lines? The O.P. was using internal pull-ups without knowing it. Illuminating oscilloscope plots in that thread.
Is there a correct resistance value for I2C pull-up resistors?