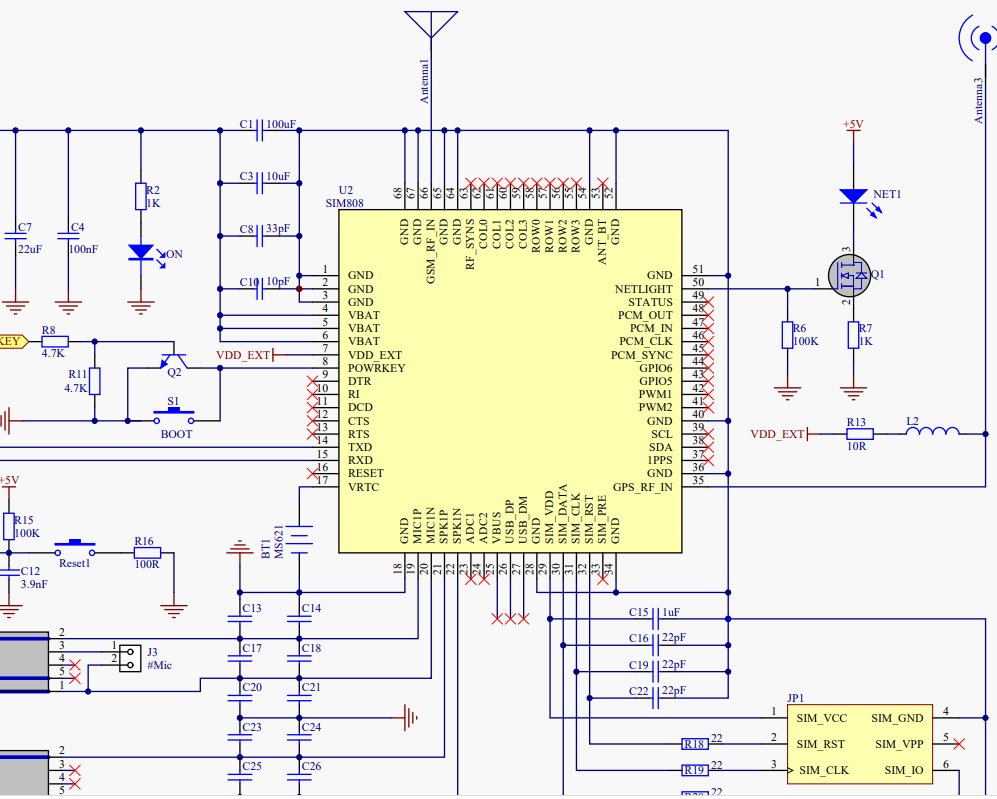 I am a newbie in electronics and I am designing a printed circuit board.

The IC I am using has some pins that I don't use in my circuit. Is it okay to ground those nets or leave them as they are?

I am asking this because I have heard that sometimes these nets can act as floating pins and could cause noise and errors. I am not sure whether this is true or not so please clarify my doubt and suggest me the right way.

If you check the HW Design Manual then you'll see that it suggests the unused pins should be left floating. Please refer to Table 4 on p.15 and p.16.

Electronic – arduino – Generate a printed circuit board from code

Software: Code that executes on a computer. Yes, technically it can execute on a microcontroller such an Arduino, or even a FPGA device, but typically the term "software" refers to code meant for execution on a common device, that an end user can install/load/run.

Firmware: Code that executes on a microcontroller or similar device. Typically such code controls the behavior of an embedded electronics device and traditionally does (should) not have frequent upgrades/releases. Often firmware is not something that an end-user is expected to know how to load/execute, but sometimes they can be expected to do the upgrade (like firmware on your network router or computer's BIOS/motherboard).

Hardware: The physical components of an electronic device. This may be everything from the copper PCB and its traces, the components on it, the screws holding it to a chassis, and the chassis itself. Normally in EE we consider "hardware" to be the physical components of the board and the board itself, including wiring and connectors, but the chassis often falls under another department (structural engineering in my workplace).

When you experiment with an Arduino, you're interacting with a microcontroller (an Atmel ATMEGA most likely) and a few supporting pieces of hardware (a voltage regulator, a USB interface, a PCB and a few other bits). The code you write, I would consider "firmware" and it controls the behavior of the microcontroller.

You may decide to control an LED, or a stepper motor, or a serial port device... it's entirely up to you. The code you write, however, doesn't "know" what you're controlling, necessarily. The electrical characteristics of the hardware you decide to control is outside the scope of the firmware you write, and therefore there's no way to translate what you've written into a physical board.

You'll want to research electrical schematics and PCB layout and design, in order to move on to the prototyping and physical "hardware" stage.

Electronic – Electronic wearing of a printed circuit board

If water condenses on your PCB, then salts left over from manufacturing processes will turn it slightly conductive. If the PCB is powered, copper from exposed pads and solder will be corroded by electrolysis. This is what kills your phone if it gets wet and you leave the battery in. It goes a lot faster than you think.

You can replace "water" with sweat, dead bug juice, rodent pee, whatever...

On a very humid day, you may hear a loud bang followed by a puff of smoke: that used to be a chineeese USB charger with 0.5mm mains creepage distance.

Now, under normal circumstances, everything has a finite lifetime...

The first thing to fail is usually a capacitor which dries up. Heat accelerates the process. If the capacitor overheats, bulges, and leaks electrolyte all over your board, this will corrode everything it touches.

Solder joints (and semiconductors) can crack under heavy vibration or due to thermal cycling (the famous XBOX ring of death).

Mechanical shock (ie, dropping the stuff on the floor) will cause heavy components to lift their pads, or just break off the board. Shock, or board flex from an over-eager user sticking a huge CPU cooler in their PC will crack brittle stuff like MLCCs or ferrites... or BGA solder balls.

Connectors which are manipulated often will wear out, or they will break off the board if they're pure SMD.

Cable which is flexed too often will break.

Electrical contacts which are secured by screws can eventually loosen, then overheat and burn if high current.

Multi-strand wire will corrode over the years if the air is contaminated.

Semiconductors under high heat/voltage/current stress can fail due to thermal cycling or electromigration.

Lead-free solder grows whiskers which will cause shorts.

However, unless you're designing a guidance board for a Minuteman missile, your stuff will probably be obsolete before it fails!...

What I mean is that the most likely causes of failure should be addressed first.