I just mounted some 47uF tantalum capacitors to a logic board. I used a heat gun at 325°C to heat them up so the solder under there would melt, and then they would sit down on their pads. They did successfully mount, but I was concerned about the heat gun damaging the caps because they became very hot, and one or two of them became discolored (slightly toasted :D). The machine boots fine.

Any component can be damaged by too much heat. Factories carefully control the temperature of their "solder reflow ovens" to ride that balance between properly soldering the part and destroying it. It is more than just temperature that they control, it is the time or speed at which a part is brought up to a temp, how long it stays there, and then how quickly it cools. Some ovens have 7 or more zones, each with their own temperature controls, just for this purpose.

The problem with a heat gun is that you have no real control over anything. While the gun might be set for 325 deg C, you have no idea how hot the parts were getting, or how fast. Could the heat gun have damaged the parts? Absolutely. But it could also have worked, too.

There are these things called "hot air reflow solder stations", which is essentially an expensive heat gun designed for doing things like this. It has lots of controls for soldering parts without damaging them.

When it comes to caps, there really isn't any reason to use a heat gun-- or even a hot air reflow solder station. There are only two pins, which are relatively big. Even if the PCB was done wrong, there are always ways to hack a cap on there.

The only parts that I can't solder with a standard soldering iron are BGA's, and some QFN's with the E-Pad on the bottom. Everything else, TSSOP's, TQFP's, etc., I can just use a standard iron.

I would guess that \$22\mu F\$ is the minimum capacitance that the application can use.

You may also be able to use multilayer ceramic capacitors in parallel to get \$ 22\mu F\$ - just don't use electrolytic. Electrolytic capacitors are not 'high speed' due to their intrinsic parasitic characteristics.

Can a solid capacitor be damaged by a heat gun

The temperature to which you set your temperature controlled heat-gun is about 100 degrees C higher than the recommended reflow profile for ceramic capacitors.

A normal vapor/air reflow profile looks more like this, where Peak Temperature is between 230-260C: 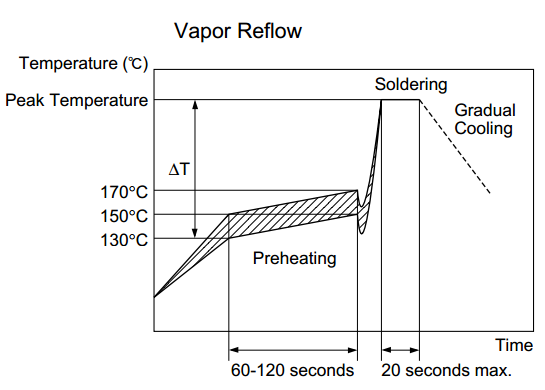 There is more information available in these documents:

Basically, you want to be careful to avoid thermal shock cracks, which occur when the part is heated too quickly. Move the heat gun in from a distance over the course of a minute rather than directly exposing it to 360C air.

Also, avoid heating the capacitor to much over 260 C for any length of time. This temperature is the general maximum for most parts, including silicon parts like the SOIC you replaced.