I have the following setup. Note the device in the middle says P, not R, so I now how many Watts the device produces. (I'm not sure if I drew the correct symbol there) 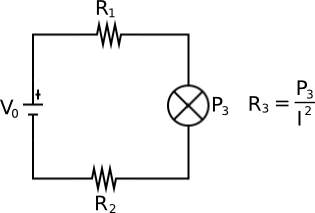 Calculating the current resolves to a quadratic equation, which I can solve: 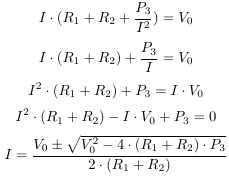 This gives 2 values for I, one of which will result in negative values (right?) and can be discarded.
Now, when I add another device (and then another and another), it becomes too complicated for me: 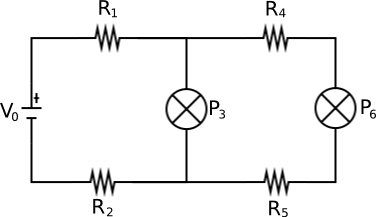 I figure there must be some general formula that I can plug into the previous one at each step.
The ultimate goal is to figure out how many devices can be added before the voltage becomes too low, considering each P and the lengths of the wires (which is what R1, R2, etc represents) Can someone figure this out?

Update:
As it turns out, working backwards is extremely easy, e.g. asking the question: "If I need a minimum of v Volts over the last device, what does \$V_0\$ need to be?" It's just a matter of adding voltages and currents.
Working forwards in the way I imagined is not doable, e.g. asking the question: "If \$V_0\$ = v Volts, what is the voltage over the last device?" This can be done with iteration.

This is actually a classic problem in electrical installations, i.e. knowing the power consumption of several devices plugged to an electrical line, what is the voltage drop in the farther device? It is normally solved using an approximation, so it doesn't give the exact value, but rather close (and pessimistic one).

I'll drawn the problem in a different way, unipolar diagram:

(R1+R2) represent the resistance of the two wires (L and N) in the first section, P1 is the power drawn by the first device, etc.

Delta_V is the voltage drop in the last device.

The approximation is that voltage drop will be small and therefore the current at each device can be approximated by: $$ i_k=P_k/V$$ where \$V\$ is the nominal voltage (your \$V_0\$). In fact the voltage will be a little smaller than this, and therefore the real current too. (Edit: this deserves an explanation: a 100 W bulb if fed by less voltage than nominal, will draw less current than nominal. If it was a "clever" bulb, it would get more current so that it keeps the 100 W, but it is not the case in normal passive devices).

This can be generalized for as many devices as you want. The idea is that the currents of all the devices will go through the first section (that's why there is \$i_1+i_2+i_3\$ multiplying the first section resistance), in the second section all but the first device, etc.

The value found by this formula is a worst case. The real drop will be smaller.

If you want to go exact, then this iterative procedure could be followed:

Those steps can be written in matricial form and evaluated through Matlab. I don't know if Mathematica or Maple would also be able to find a closed form solution! 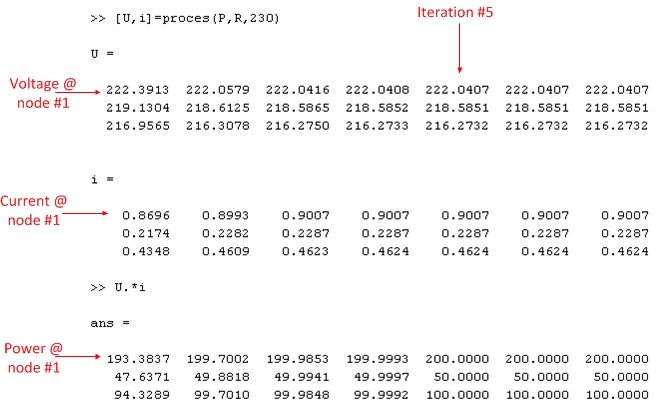 You can see that after a few iterations, the voltages and currents converge, and the power drawn at each node has the desired value.

It is a long question, but better than a short one, as you've shown your own research.

1) Solar cells. If you're stacking your own ones, stack 9 of them and get the 4.5V of the original circuit.

2) Battery charging. Batteries are the only thing you've left out of your spec. This is an area where the circuit design relies on cutting a lot of corners. In theory it might be out of spec, if you were to put 4.5V at 280ma through AA NiMH cells indefinitely. In practice, you don't get full sun all day, you'll be using it indoors, and you're not going to get optimal power transfer from the cells, so this isn't going to cause problems.

3) Diode. It's just a regular diode, not a zener. Current through it is actually determined by the battery and right hand side circuit, not the solar panel - the transistor is off when the panel is generating electricity. The original 1N914 will be fine. 1N4004 will also be fine.

4) Resistors: not a precision component here, use whatever meets your cost constraint. 5.1k for 5k is fine.

5) Wire: not critical. Your ebay link looks suitable. Thinner is better for the toroid.

6) Transistors: stick with the exact part numbers. Design may rely on specific parameters.

7) LED: again, this circuit relies on cheating. Normally a white LED won't run from two NiMH cells. The joule thief part provides a boost converter that gives small pulses of higher voltage. It doesn't have the capacity to provide a lot of current at that voltage. In combination with the pulsing this means there should be no risk of damaging it.

(A proper analysis of this circuit would be good, if nobody else supplies one I'll do it in a few days).

A general method to solve arbitrarily complex (linear) circuits with arbitrary sources is "nodal analysis". This is the method SPICE (at least the linear analysis) is based on.

It roughly consists of the following steps

** In case the voltage source has zero output impedance, this conversion cant be done. But then the potential of one of the nodes (the source is connected between) is known. Hence we have one equation and one unknown less.

Note, I used an explicit 0 where U0 would have been. That is two equations for two unknowns (U1 and U2) and should give the correct solution (if I made no mistake).