I have a basic doubt about charge transfer between pixels of a CCD. Let's consider this animation (picture taken from wikipedia):

A precise time sequence of applied voltages between gates and bulk allows to move the charge between a pixel (represented by a MOS element) to the next one.

But this picture shows the semplified situation in which only the pixel at left has some charge inside (i.e. only that pixel has been excited from light). What would happen if all three MOS are excited with light? How can we distinguish (in the external circuitry) which pixel has been excited (and how much it has been excited) if their charges are mixed (since the charge of one pixel goes to the next one etc) during the transfer mechanism?

The gates shown in your diagram are not pixels. They are only demonstrating the charge transfer mechanism.

In an image sensor, only every third gate is connected to a pixel (photodiode), and the gates are driven by multi-phase clocks, such that there is always isolation (at least one gate that is "off") between one pixel's charge and the next.

This image, taken from How a Charge Coupled Device (CCD) Image Sensor Works, shows the relationship between gates and pixels: 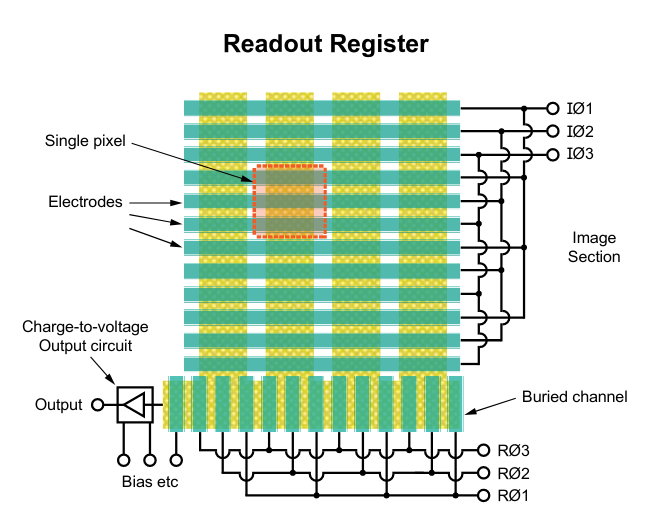 Only one or two out of every three MOSFETs contain charge from a particular pixel at any given time.

I don't see too many issues using a standard USB camera in a vacuum. Your two largest issues are likely to be heat dissipation, and outgassing from the camera components.

Depending on how high a vacuum you need, you may need to package the camera in a hermetic container. There is almost inevitably going to be at least a small amount of soldering flux/VOCs left on the PCBs from production, and it will outgas when you pump the system down.
If you have sufficient pump capacity, or don't need extremely high vacuum, it shouldn't be too much trouble.
You could also try removing all the plastic from the camera, and baking the PCB assembly at a low temperature to speed up the out-gassing (~100°C?).

Second, at least some of the USB-cameras I have used do dissipate a fair amount of power, so depending on the camera, you may have localized heating issues due to the lack of convection cooling. It should be possible to deal with this using proper heat-strapping, though I think it would probably better to just pick a device with low dissipation.

Lastly, you can certainly buy some pretty interesting USB cameras, which do support all sorts of fun things like variable ISO, and variable shutter time. It mostly depends on your budget.

If you don't mind experimenting, I would say go to your local electronics store, and just buy a webcam, and see what happens (and post pictures!).

The hardest part, I think, is probably going to be hermetically sealing the cable feed-through. You can't just stick the cable in a cable gland, as you will get leakage through the cable, both between the strands, and between the individual wires and the sheath. You will need hermetically rated bulkhead connectors.

Help me to drive the CCD ICX282AQ

To drive this CCD you'll have to have a full understanding of its operational principles and a strong background in low-noise electronics. Driving the device is only part of the problem, as there are different voltage swings, edge rates and signal relationships that must be met or the device will perform poorly if at all. On top of that, there is the need to have some sort of sequencing/state machine and ADC on the other end coupled to a CDS circuit.

The nice thing about Sony devices is that they often also sell support chips that serve to form an operational camera. These would involve a digital sequencing chip, drivers, and analog CDS chip (sometimes with integrated ADC). With these wired together, you'd just need to provide the many different power supplies required.