What is the simplest way to regulate the min DC voltage in a circuit?
Is it possible to do with zener diodes?

According to your description, something like this should work: 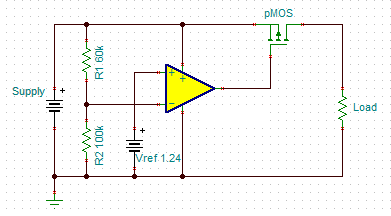 Using a pMOS to switch a load is summarized here.

You could probably use a Zener as the reference for the comparator, too, or maybe rig something up to drive the MOSFET from the Zener more directly, but I don't know how precise that would be.

First of all, to protect your MCU it's a good idea to use a 33 ohm resistor between your PWM pin and the Gate of the MOSFET or transistor.

While the PWM pin should be either HIGH or LOW, there could be situations where your Gate pin can have nothing as input, for example when the MCU is powered off. Therefore it's also a good idea to use a pull-down resistor between GND and the Gate pin. This ensures that your MOSFET stays off if the MCU is not connect or is powered off. I would say a 10k ohm or even a 1k ohm would suffice, it depends on the amount of noise and power consuption. Use the 1k ohm on higher-noise environments.

For the sake of your MOSFET protection, unless your current load is higher than the MOSFET's current take or the transistor's Icc, you don't need to worry about it if you are only using it to control LEDs or even lamps. Most MOSFETs can flow up to 3 Amps of current, while normal transistors' aren't that much. Use a current meter to check how much current your device consumes at the highest level (e. g. when all parts of it are turned on at the hgighest level and speed.)

However, you should also consider an extra protection if your device has any kind of a Electromagnetic Coil inside it, like the Solenoids, Motors and Relays.
This is because the coils generate a reverse voltage spike when the power is switched off, which could damage your MOSFET or transistor. This is a side effect called Inductance.
To prevent this, a diode is usually used know as the flyback diode or the kickback diode. It is generally a normal diode which is conncected reverse-biased in the circuit near the consumer device, which allows the reversed current to be looped inside the diode and the device, thus allowing the current to be drained. Wikipedia has a nice article around it.

As for your case, you are planning to use a motor, which has a coil inside it, so try to put a diode near the motor and away from the MOSFET (if possible) to drain the unwanted reverse current.
If you can't put it on the consumer device, at least use it on your PCB along with the MOSFET, it's better than nothing.
I would say a 1N4007 could suffice here, just remember to put it backwards in the circuit (Anode goes to the Drain pin of the MOSFET and Cathode goes to the VIN of your device. Unlike resistors, diodes must be used in the correct direction.)

Please be sure that you are supplying enough current to your circuit. It's also a good idea to use a 220 μF cap to regulate the 5V input of your ATTiny.

As for the protection against short circuits, you could either:
a) limit the current with a resistor
b) use a resettable fuse.

Obviously, limiting the current here would be a stupid idea, so you could use a resettable fuse to prevent flowing too much current into the circuit. A Resettable fuse (or PTC) is a device which blocks too much current from flowing until you remove the load and break the circuit; In this case shorting the circuit will flow all of its current through it!
The PTC's discussion goes beyond to the answer of your questions, so try looking it up on Google.

Have a great fun playing with the electronics.
Hope I've helped you!

Electronic – To protect a LiPO cell from undervoltage, how low current is low enough

Amongst other things I design solar charged lights.
I want customers to be able to put a "dead" light in a dark place for a long while without destroying the battery.

My approach is to reduce off current to so close to zero as to not matter and then deal with battery self discharge issues.

1 uA = 8.8 mAh/year.
Scale that for time and discharge rate as desired.
8.8 mAh is 1% of the capacity of an 880 mAh cell.
You can decide what reserve you wish to allocate to this task for a given battery.

An "off" MOSFET has near infinite resistance. Even a fully off bipolar transistor passes only a tiny fraction of a uA at the sort of voltages typically concerned. The problem is usually with current in dividers used to sense battery or other voltages. One megohm passes 1 uA/volt. As you increase divider resistance you need increasingly low leakage and bias currents and offset voltages. You can buy specialist parts with very low current consumption indeed - but they are usually a significant cost in low cost designs or completely beyond consideration. Instead, when Vbattery has got as low as it is going to be used at for any purpose, I turn the dividers off - usually with a high side bipolar transistor. It is easy to get a current so close to zero as to be irrelevant compared with other factors. When charging next occurs I re-enable the low voltage cutoff circuitry with charging energy and the process starts again. If recharge is not enough to bring the battery level back up to the absolute minimum level it again "goes back to sleep" as soon as charging stops. This arrangement takes a few more parts than a purpose built low current divider IC,but costs far less,and ultimately performs as well or better than anything you can buy.

The circuit below from this question Solar charging circuit question does what you want. In this case it's self contained so turn on and off of the left hand divider by T1 is powered by the solar panel and does not load the battery. The on/off circuitry at right here uses a TL431 (under 3 cents in China in volume) but could be anything that works for you. T1 off draws ~= zero current. Cathode current for a turned off TL431 is < 0.050uA (50 nanoamp) worst case.

This circuit is not for LiIon but would work as well with changed resistor values. At elevated temperatures the reverse leakage current of the Schottky blocking diode may become the dominant quiescent load - a pleasant problem to have :-).Here PCB area and manufacturing costs would be the largest cost - components that manage the actual zero current shut down in volume ex China are in the 5-10 cent range.

Control circuit current when on is not usually a major issue as solar energy is available, but if you want to minimise current, using a TLV431 rather than a TL431 reduces minimum on cathode current when in-regulation to under 100 uA. 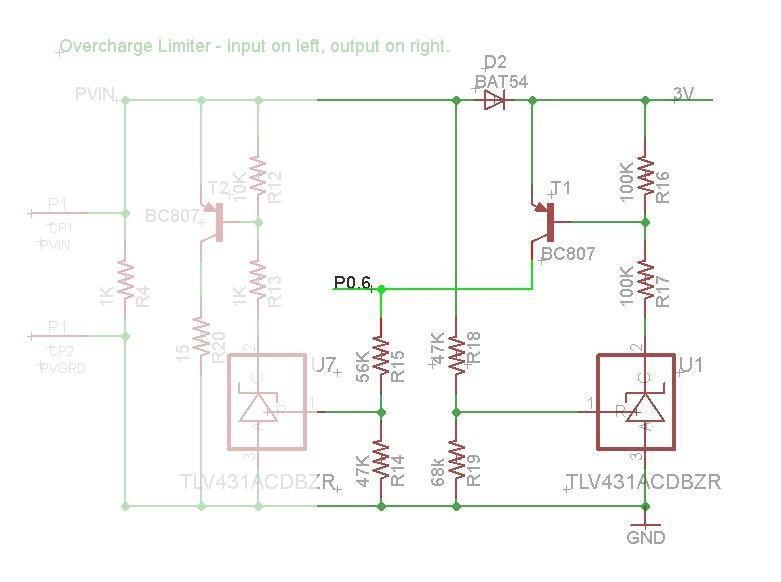