I have recently designed an audio player that uses the TI TPA3112D1 power amplifier, and mostly based it on the reference design and schematic. I find however, that the design is failing the conducted emissions test due to noise feeding back into the 24VDC supply. This noise starts at 340khz with harmonics present proceeding up the freqency range. I assume this to be from the amplifier, as the noise is starts as soon as the amp is unmuted. The noise is present regardless of audio level output of the amplifier.

I have tried adding different types and variations of bypass caps, which seems to have really no effect. I also tried a 12uh inductor (AISC-1210HS-120K-T2) I had on hand on the positive supply input, which also made no noticeable difference. The test house also tried a Steward LFB310190-000, which made little difference.

The PCB is a 6 layer board, the pictures below don't include layers 3 and 4, as there are no traces or planes close to the power and power amp circuit.

The power circuit uses a common mode choke, which probably doesn't target these low freqencies at all.

Googling this is largely ineffective, as most app notes are geared towards emi on the output side of a Class D amp. It may be I need low freqency filtering of some sort, but it isn't clear to me. 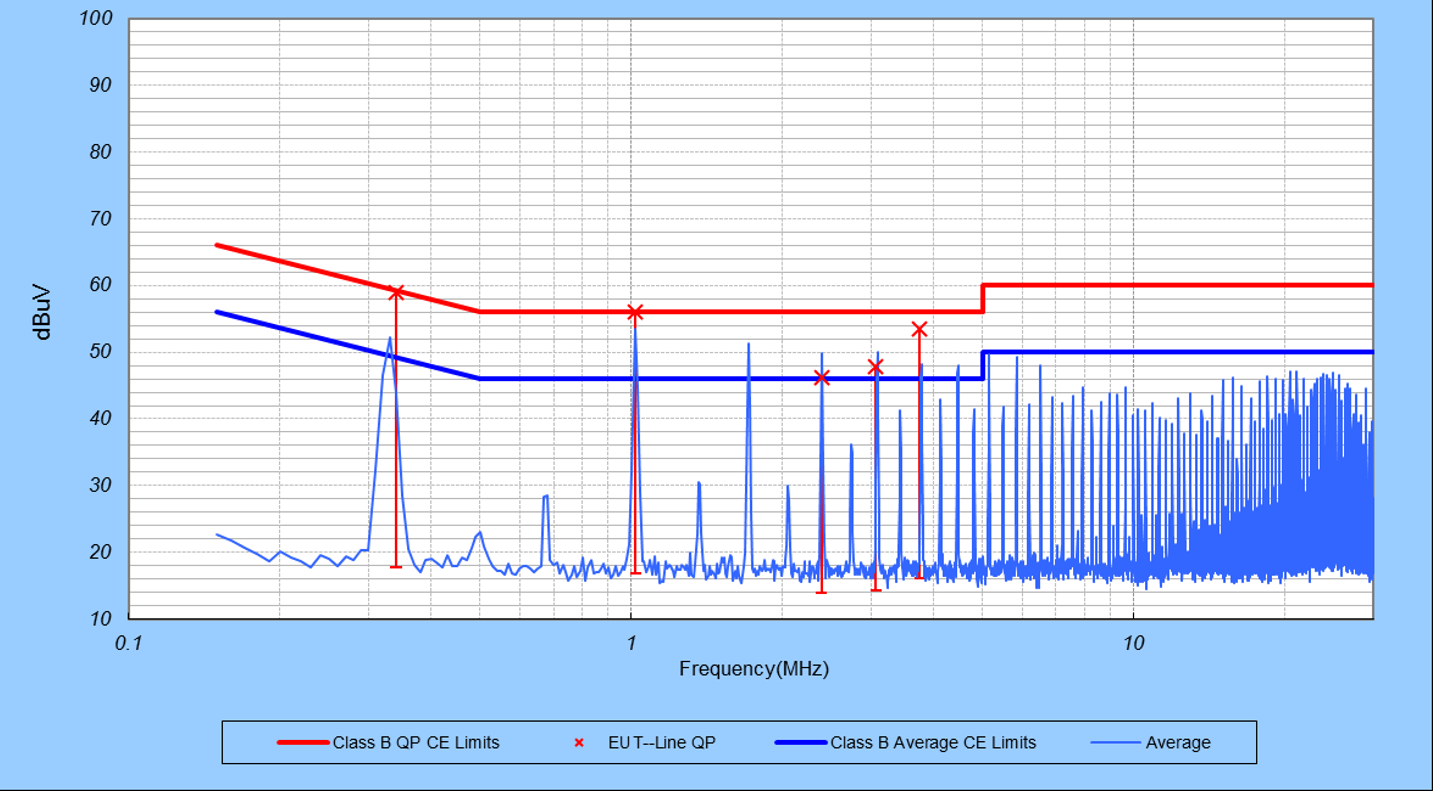 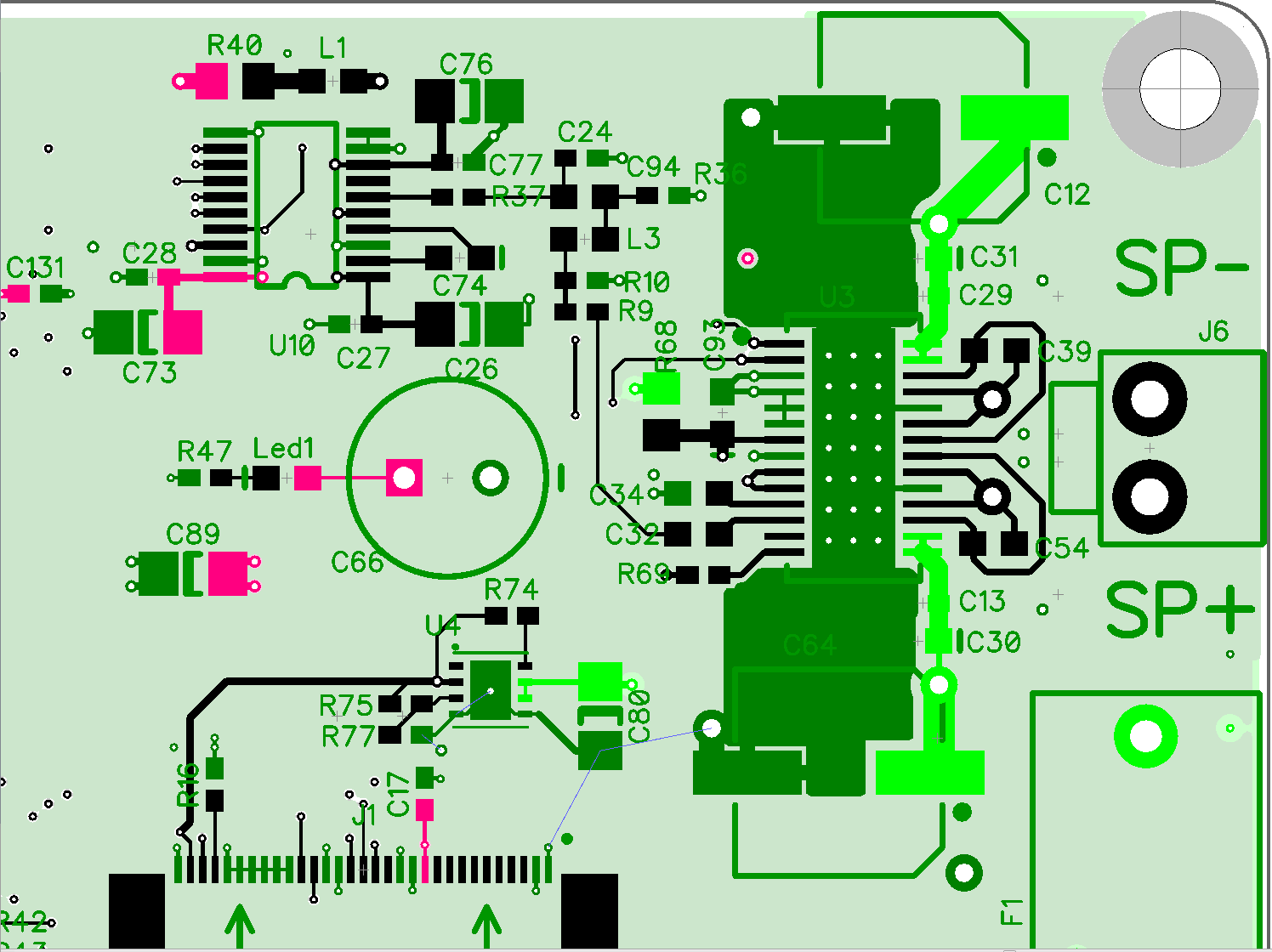 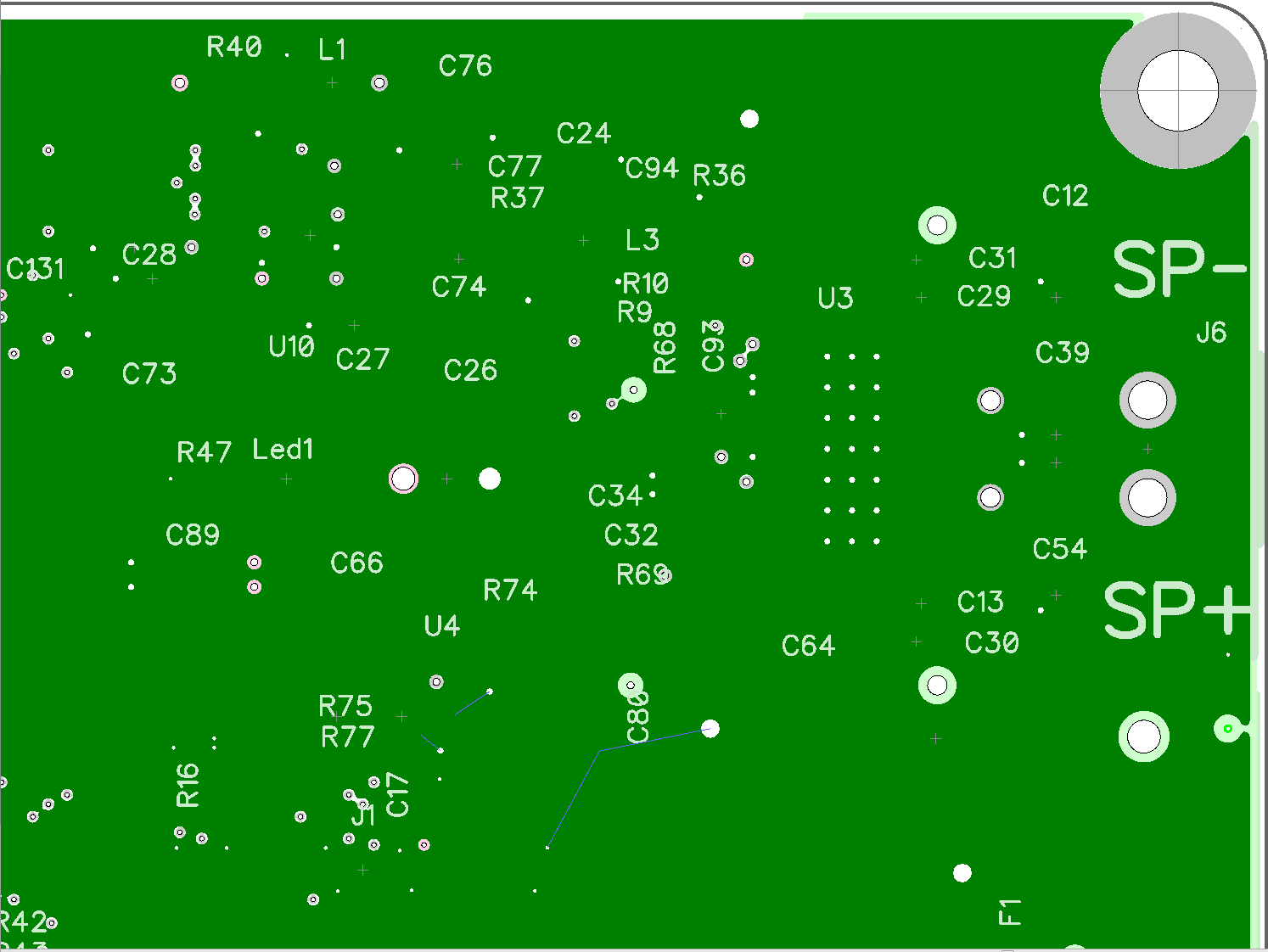 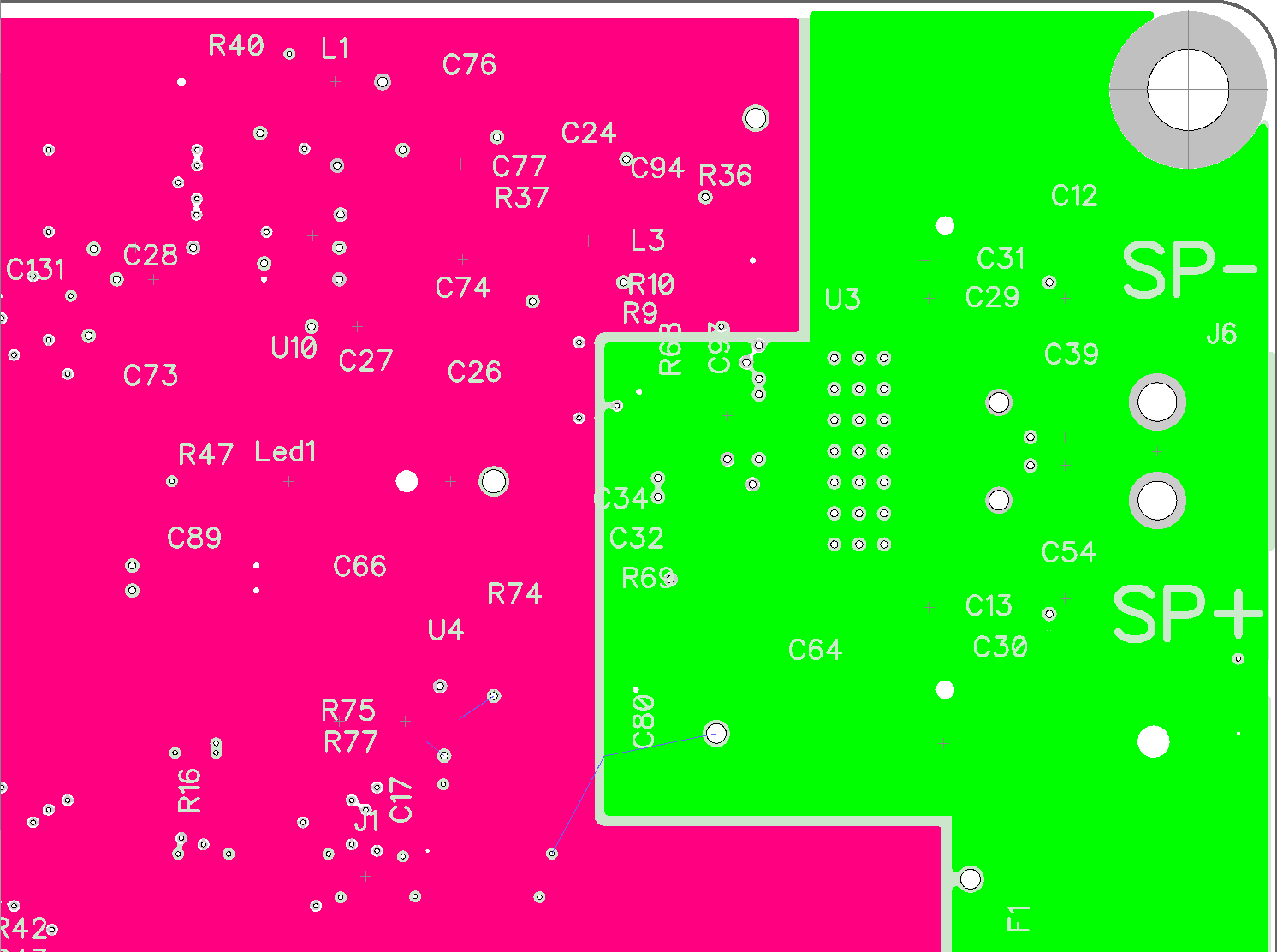 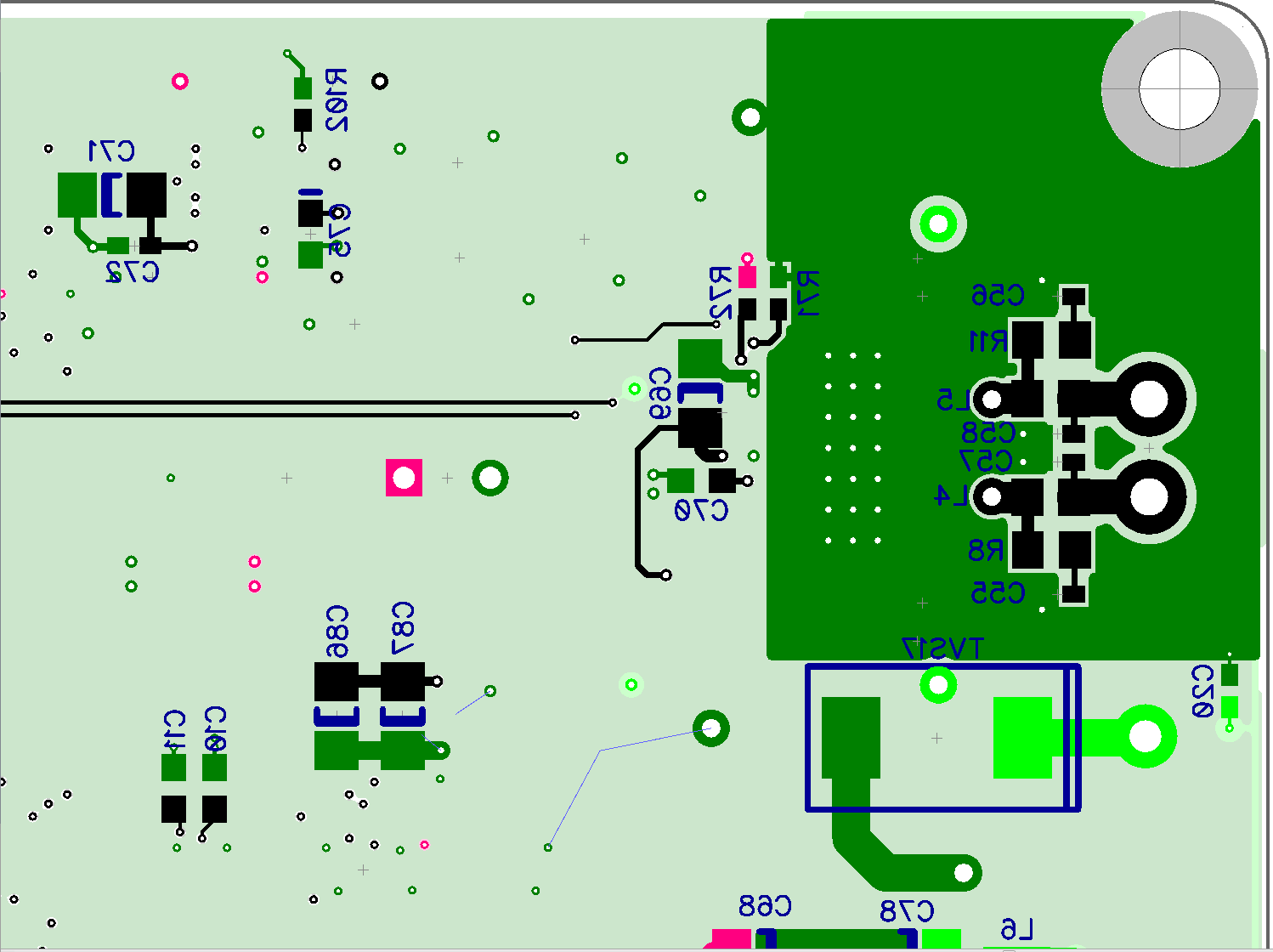 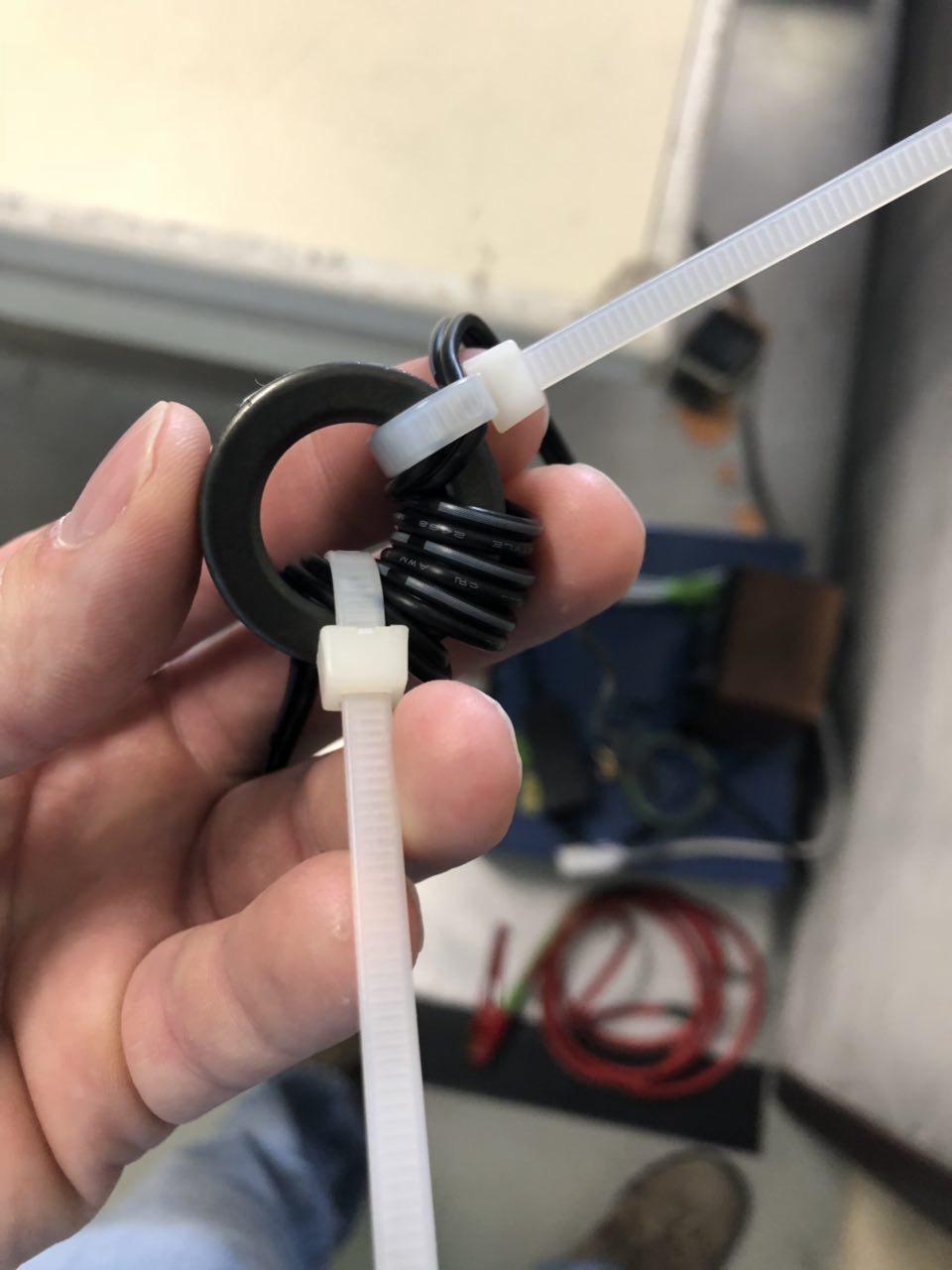 My own lab results 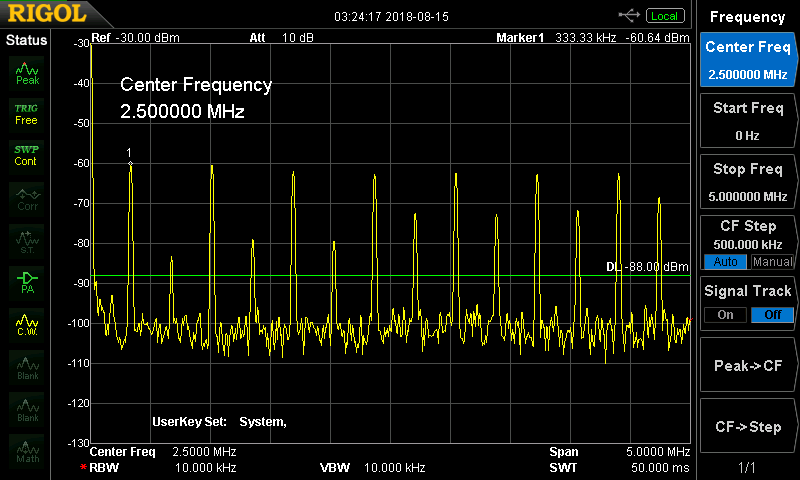 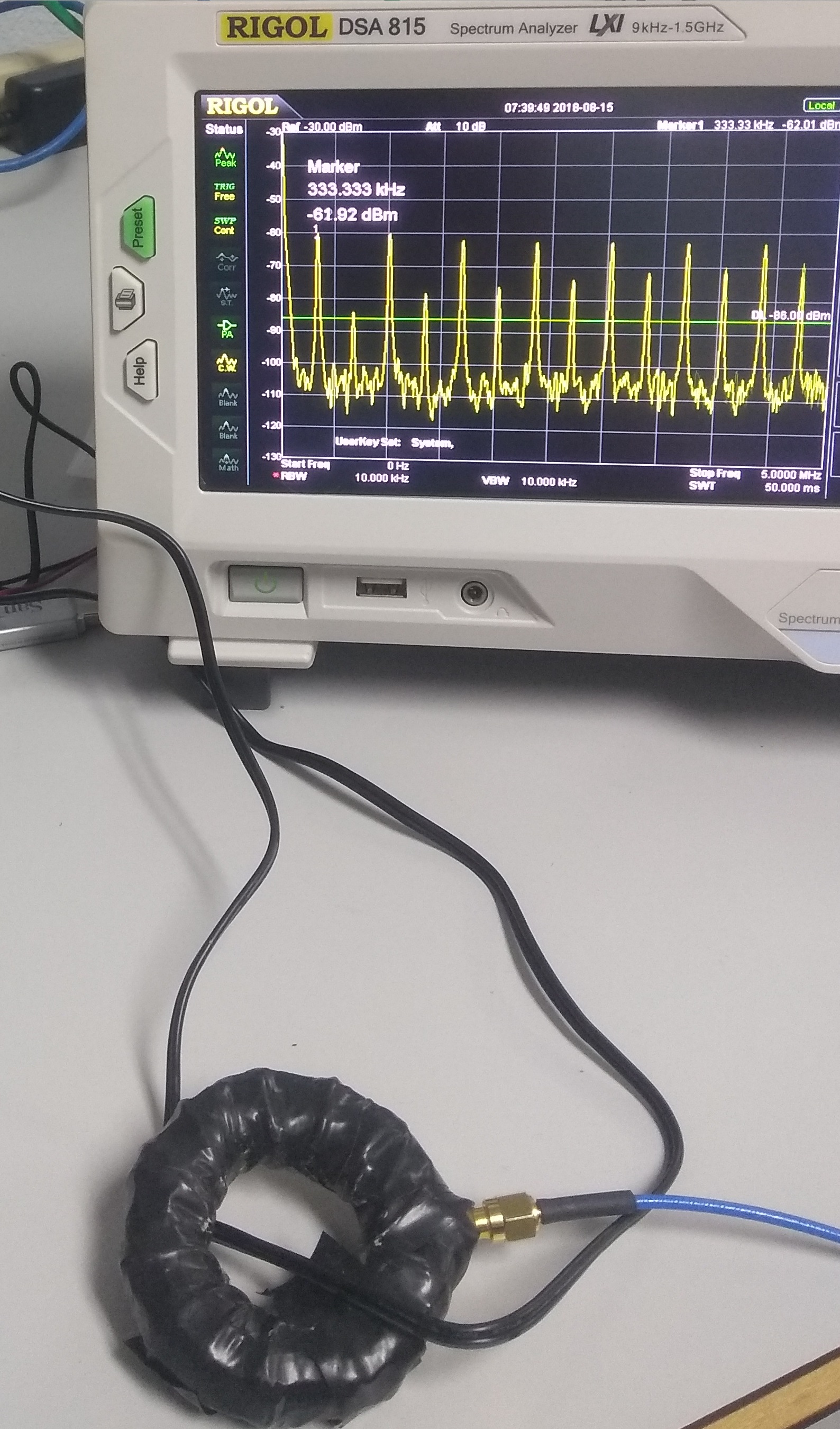 Pre and Post 12 uH inductor, prior to common mode choke 24V + and -, with A-B, at output, through common mode choke(It would almost appear to amplify these signals!?) In this fix, I have cut the traces between the via and the sm caps, routing the supply through the cap leads. This cap is a 470uf 35v electrolytic. I have also double stacked 1nf and .1uf on each side.

Results are no better, probably slightly worse. The most noticeable difference is caused by touching output leads or speaker body, which causes these spikes/harmonics to approximately double in amplitude. This would seem to indicate that output filtering (L4 and L5) play a part in how this works. 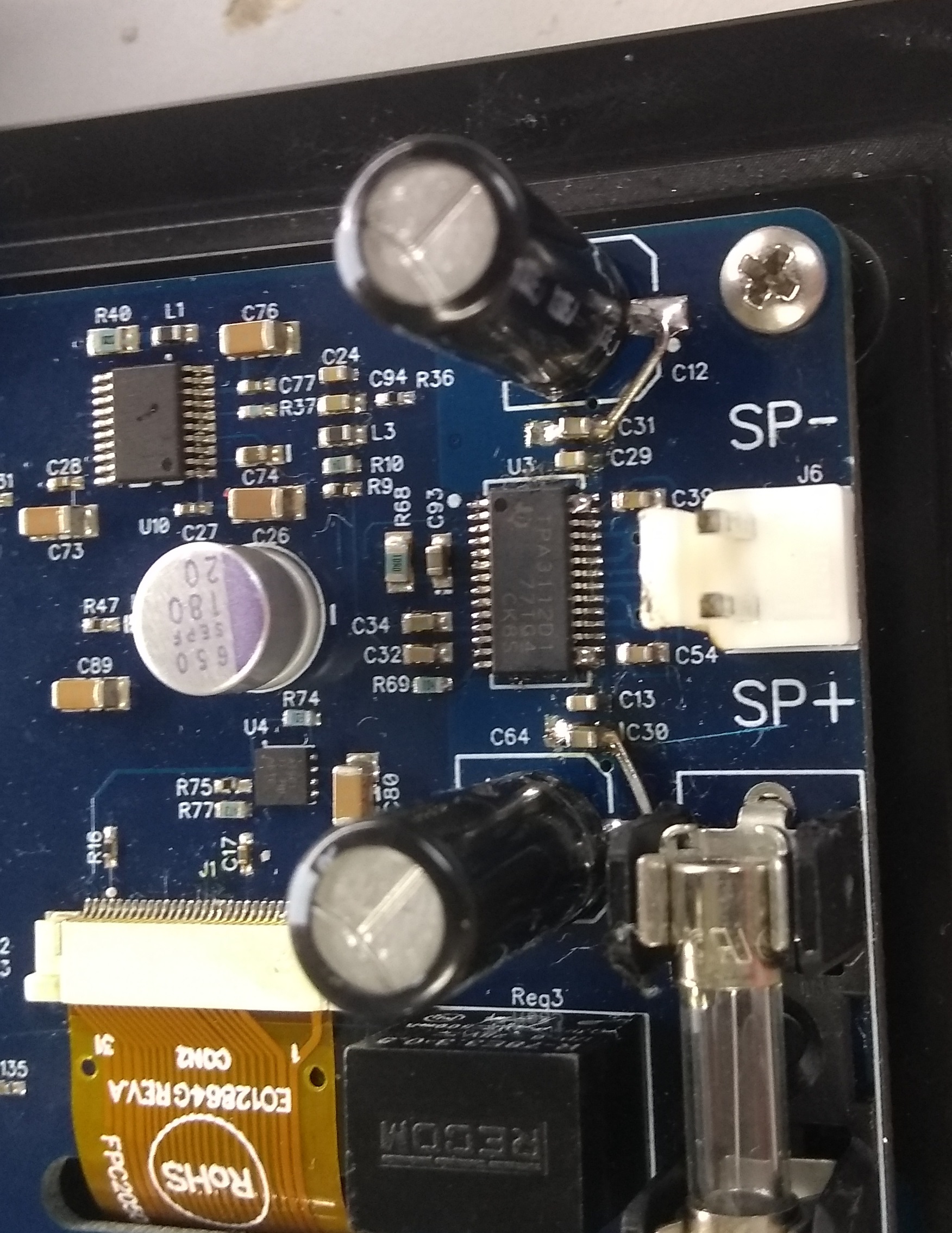 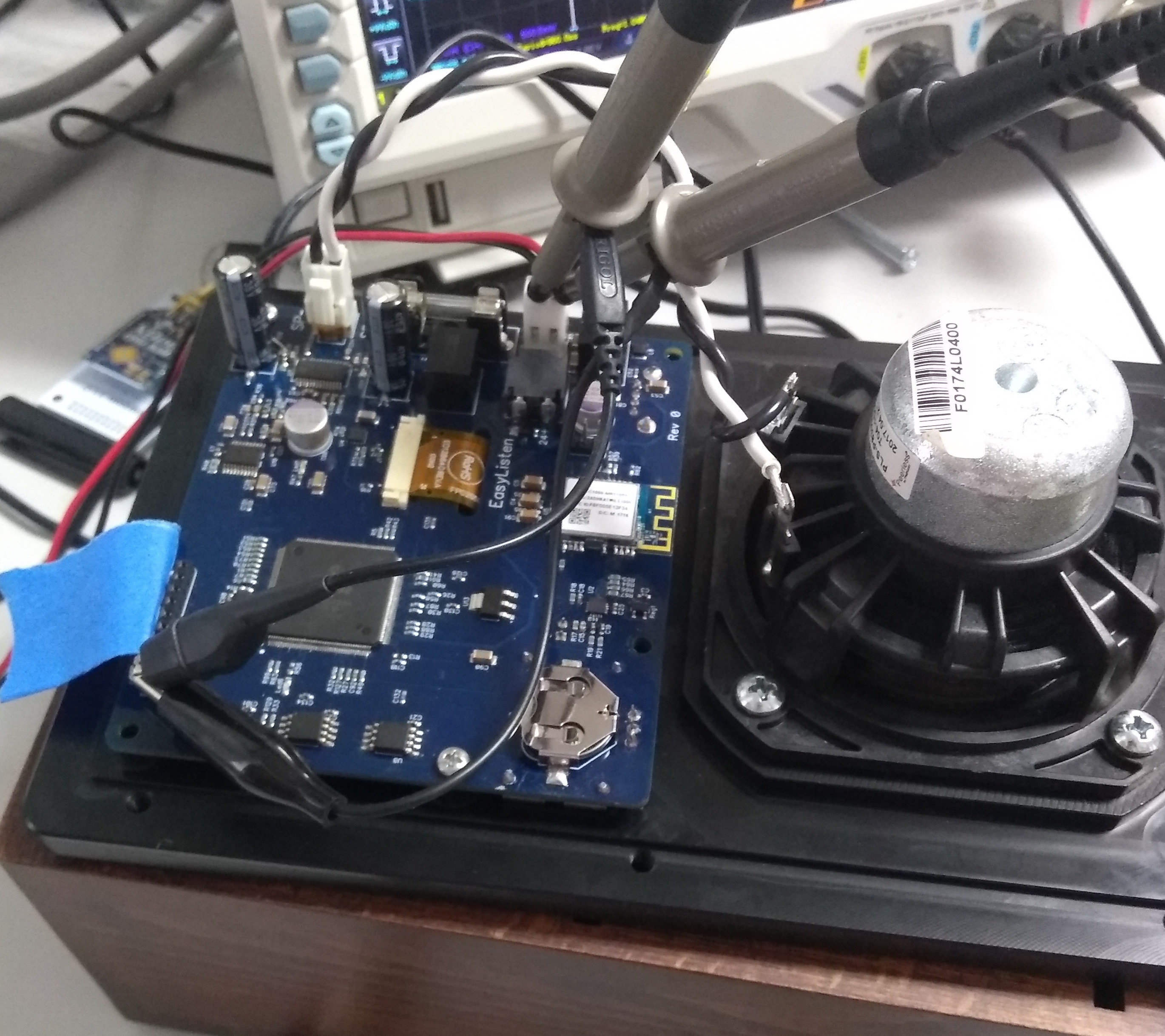 Do re-read the datasheet:

The TPA3112D1 is a high-performance CMOS audio amplifier that requires adequate power supply decoupling to ensure that the output total harmonic distortion (THD) is as low as possible. Power supply decoupling also prevents oscillations for long lead lengths between the amplifier and the speaker. Optimum decoupling is achieved by using a network of capacitors of different types that target specific types of noise on the power supply leads. For higher frequency transients due to parasitic circuit elements such as bond wire and copper trace inductances as well as lead frame capacitance, a good-quality, low equivalent-seriesresistance (ESR) ceramic capacitor from 220 pF to 1000 pF works well. This capacitor must be placed as close to the device PVCC pins and system ground (either PGND pins or PowerPAD) as possible. For mid-frequency noise due to filter resonances or PWM switching transients as well as digital hash on the line, another goodquality capacitor typically 0.1 µF to 1 µF placed as close as possible to the device PVCC leads works best. For filtering lower frequency noise signals, a larger aluminum electrolytic capacitor of 220 µF or greater placed near the audio power amplifier works well. The 220-µF capacitor also serves as a local storage capacitor for supplying current during large signal transients on the amplifier outputs. The PVCC pins provide the power to the output transistors, so a 220-µF or larger capacitor must be placed on each PVCC pin. A 10-µF capacitor on the AVCC pin is adequate. Also, a small decoupling resistor between AVCC and PVCC can be used to keep high frequency, Class-D noise from entering the linear input amplifiers.

Get at least 220uF low impedance cap. Also here are a few pointers to your layout. 3 circles in red, traces to thin to deliver higher power. 2 arrows in orange, shift the via holes to a new location; punch at least 3 vias per side. Layout examples in page 23 is better to follow for first prototype. 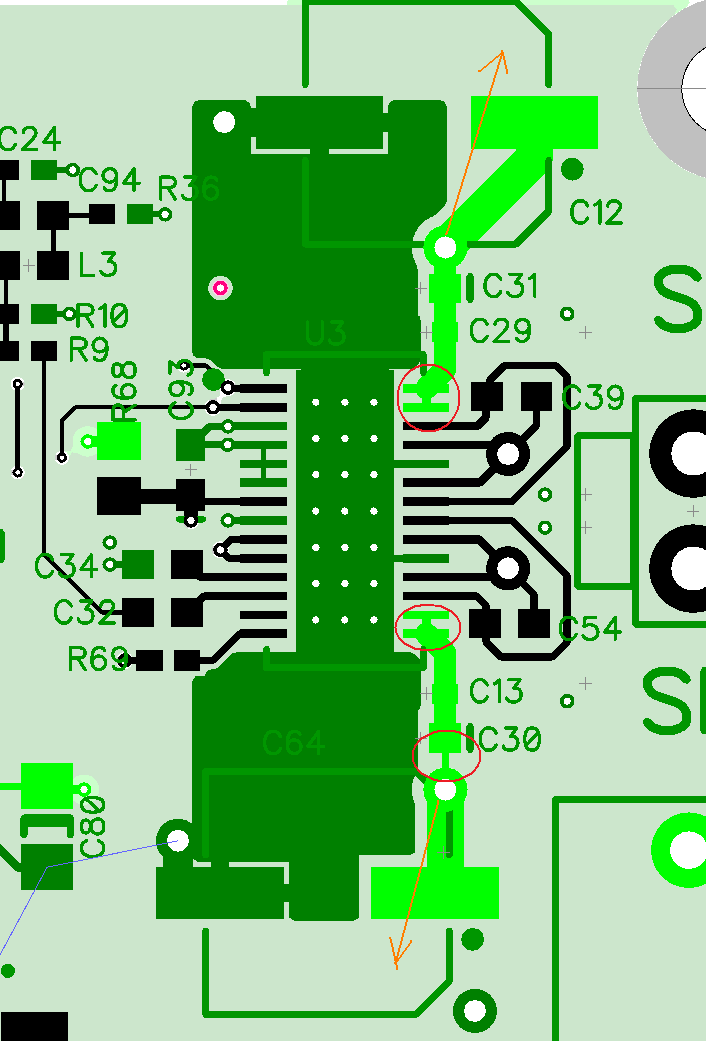 For all of the capacitors, what should the voltage rating be?

There are no really big capacitors in the circuit, so don't worry too much about price difference. 35V voltage rating is too low, you don't want your components used at their maximum. I believe the next commonly available voltage is 63V, but I guess you can use anything above 40V.

Is the polypropylene required?

through a bridge rectifier

If you are sure that the voltage is not exceeding the 35V, why don't you try it? You're going to hear a hum from the mains, 100 or 120Hz, depending on where you live. It is a great way to learn. Sometimes a voltage regulator fails and you'll recognize the sound and know immediately what a problem with an amp is.

Best though is to get a series regulator to stabilize the power supply. Now this can be a bit tricky because:

EDIT: What should the value of C3 be?

I missed the capacitor sizing question and I initially understood the mentioned parallel caps were a given. I personally think 4Hz (as @Andy calculates) lower cut off is really, really low. 20Hz is already pretty low for a audio project like this. I'd personally calculate with 4 ohm for the speaker impedance though. With these numbers C3 could easily be halved to 2200uF. @Andy's formula is easy enough to experiment with the values you have lying around. Cost and physical size are the important factors here. Also as mentioned before, I agree with @rawbrawb that the parallel polypropylene is a bit overdone for a project like this, but hey, if cost of the cap is not an issue it is nice to experiment with and form an opinion of your own.

In general an SMPS generates a lot of switching noise. However, most SMPSes use a switching frequency above 50 kHz as a lower frequency would be inefficient.

An SMPS can generate lower frequency components depending on its design and in particular the amount of current it has to supply. Many SMPSes switch continuously at the same frequency. However some SMPSes go into a pulsed mode (PFM: pulsed frequency modulation) when the load draws only a low current. This is done to improve efficiency at low loads. The pulsed frequency can be in the kHz range, so every 100 us - 1ms there will be a short burst of 100 kHz. This you might want to avoid in your application. If the PFM mode of your SMPS is a problem then you might be able to work around it by drawing more power from it.

Another way to suppress the switching noise is to use linear regulators whith high supression in the desired frequency range.