The common differential amplifier takes two signals and amplifies the difference between these two signals. I am aware that this difference usually is around a few millivolts or microvolts so, to put it in engineering terms, it is zero.

Everywhere here, in the text books, or internet, the mathematical calculations are based on the fact that the voltages at the inverting and non-inverting terminals are exactly equal to each other, so conceptually we should have a zero output voltage, and that's not the point, because this circuit is going to amplify nothing.

Am I fundamentally wrong here?

As you say, this is sufficiently close to zero to be deemed to be zero for many purposes.

One of the purposes for which input=0v is a good enough approximation is when solving for the DC gain of a fed back amplifier. Typically, several resistors will draw current from input and output voltages measured in volts, and sum their currents at one of the amplifier input terminals. Whether that terminal has a voltage of 0uV, or 10uV, is irrelevant for most purposes, as the error is parts per million.

For an ideal opamp, where the gain is infinite, then the input voltage is zero, theoretically.

If you think of using a handheld DMM to measure a signal voltage, usually you'd connect the negative lead of the DMM to the system ground. That's single-ended measurement, because you only need to place the positive lead to make the measurement. Now imagine you want to measure just the voltage dropped across a pullup resistor under some condition, you move the negative lead to one end of the resistor and the positive lead to the other end of the resistor. That's a differential measurement.

Some signal sources need to be differential. Take a look at a Wien Bridge for example, this is an arrangement commonly used in strain gauge load cells and other transducers.

Proper connection routing is important to help ensure that any injected noise is mainly common-mode noise. A typical printed circuit board connection would route the sensitive signal as a differential pair, with the positive and negative PCB routes running alongside each other. When using insulated wires instead of a PCB layout, like in a lab bench test setup, a twisted pair of wires can be used.

What you suggest about using a differential amplifier to amplify a noise signal, is related to a control loop configuration called feedforward ( see http://en.wikipedia.org/wiki/Feed_forward_(control) ), treating the noise source itself as a signal to correct another stage.

You can drive two amplifiers in parallel as long as you don't load the inputs too much (choose your resistor value in consideration of the drive strength of your signal sources).

You need a different summing amplifier circuit in order to get a non-inverting sum, however. Try a simple voltage divider connected between the two inputs, the result is the average of the input signals \$\frac{V_1 + V_2}{2}\$. Connect this to the positive terminal of an non-inverting amplifier with a gain of 2. 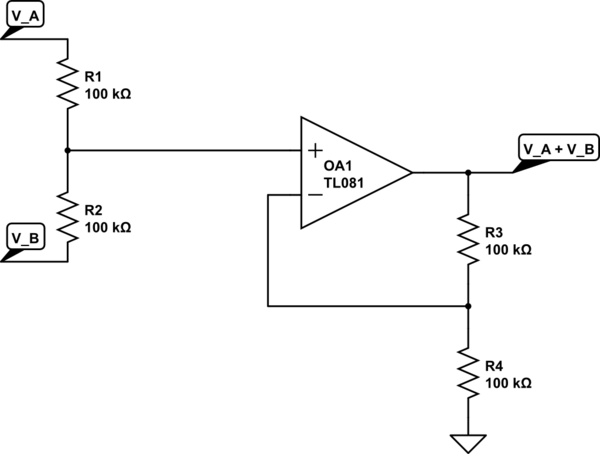 The differencing circuit you have now looks ok.