I would like to place some decoupling caps for an IC. The IC is on the top while the caps will be on the bottom, opposite side. How should I route them:

Please excuse me if this has been asked previously, but I read a load of resourses and could not find an answer to this. Thanks in advance.

(But first, I want to thank everyone for the great answers and comments!)

It actually does not matter too much, according to Henry Ott's book on EMC. Proximity, trace length, and loop size matter more.

If the IC and cap are on different sides of the PCB, placing both vias along the edge of the capacitor pad side (rather than the ends) so they are closer also reduces inductance since magnetic fields of opposite currents in the via cancels out. Multiple vias also helps. Note this also applies to connecting IC power pins to the power and ground planes. Those are part of the loop too. 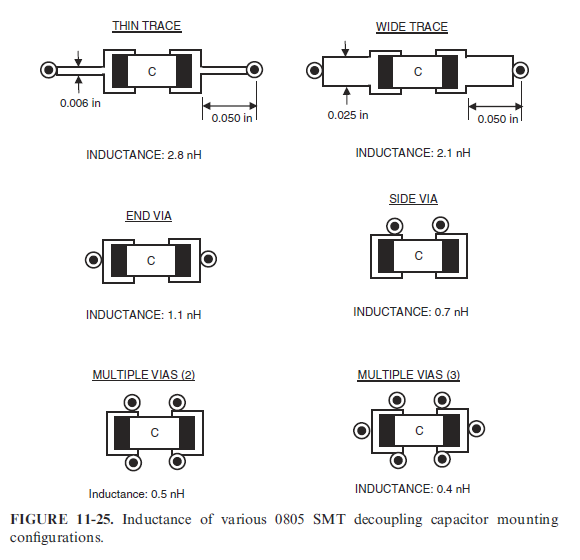 Similarly, placing two caps on the same side on opposite sides of the IC does something similar since the loop currents flow inside each loop in opposite directions and the magnetic overlap a fair amount if the loops are close to each other. 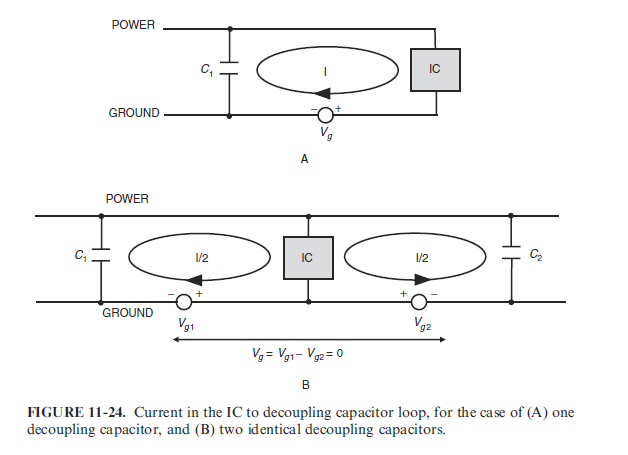 So you can see that the first requires a pair vias for both the cap and pins, but the vias can be tightly coupled, while the second requires longer traces/loops but no vias. It's twelve of one or a dozen of the other.

Proper bypassing and grounding are unfortunately subjects that seem to be poorly taught and poorly understood. They are actually two separate issues. You are asking about the bypassing, but have also implicitly gotten into grounding.

For most signal problems, and this case is no exception, it helps to consider them both in the time domain and the frequency domain. Theoretically you can analyse in either and convert mathematically to the other, but they each give different insights to the human brain.

Decoupling provides a near reservoir of energy to smooth out the voltage from very short term changes in current draw. The lines back to the power supply have some inductance, and the power supply takes a little time to respond to a voltage drop before it produces more current. On a single board it can catch up usually within a few microseconds (us) or tens of us. However, digital chips can change their current draw a large amount in only a few nanoseconds (ns). The decoupling cap has to be close to the digital chip power and ground leads to do its job, else the inductance in those leads gets in the way of it delivering the extra current quickly before the main power feed can catch up.

That was the time domain view. In the frequency domain digital chips are AC current sources between their power and ground pins. At DC power comes from the main power supply and all is fine, so we're going to ignore DC. This current source generates a wide range of frequencies. Some of the frequencies are so high that the little inductance in the relatively long leads to the main power supply start becoming a significant impedance. That means those high frequencies will cause local voltage fluctuations unless they are dealt with. The bypass cap is the low impedance shunt for those high frequencies. Again, the leads to the bypass cap must be short else their inductance will be too high and get in the way of the capacitor shorting out the high frequency current generated by the chip.

In this view, all your layouts look fine. The cap is close to the power and ground chips in each case. However I don't like any of them for a different reason, and that reason is grounding.

Good grounding is harder to explain than bypassing. It would take a whole book to really get into this issue, so I'm only going to mention pieces. The first job of grounding is to supply a universal voltage reference, which we usually consider 0V since everything else is considered relative to the ground net. However, think what happens as you run current thru the ground net. It's resistance isn't zero, so that causes a small voltage difference between different points of the ground. The DC resistance of a copper plane on a PCB is usually low enough so that this is not too much of a issue for most circuits. A purely digital circuit has 100s of mV noise margins at least, so a few 10s or 100s of μV ground offset isn't a big deal. In some analog circuits it is, but that's not the issue I'm trying to get at here.

It doesn't take local planes to do this. I routinely use the local power and ground nets technique even on 2 layer boards. I manually connect all the ground pins and all the power pins, then the bypass caps, then the crystal circuit before routing anything else. These local nets can be a star or whatever right under the microcontroller and still allow other signals to be routed around them as required. However, once again, these local nets must have exactly one connection to the main board power and ground nets. If you have a board level ground plane, then there will be one via some place to connect the local ground net to the ground plane.

I usually go a little further if I can. I put 100 nF or 1 μF ceramic bypass caps as close to the power and ground pins as possible, then route the two local nets (power and ground) to a feed point and put a larger (10μF usually) cap across them and make the single connections to the board ground and power nets right at the other side of the cap. This secondary cap provides another shunt to the high frequency currents that escaped being shunted by the individual bypass caps. From the point of view of the rest of the board, the power/ground feed to the microcontroller is nicely behaved without lots of nasty high frequencies.

So now to finally address your question of whether the layout you have matters compared to what you think best practices are. I think you have bypassed the power/ground pins of the chip well enough. That means it should operate fine. However, if each has a separate via to the main ground plane then you might have EMI problems later. Your circuit will run fine, but you might not be able to legally sell it. Keep in mind that RF transmission and reception are reciprocal. A circuit that can emit RF from its signals is likewise susceptible to having those signals pick up external RF and have that be noise on top of the signal, so it's not just all someone else's problem. Your device may work fine until a nearby compressor is started up, for example. This is not just a theoretical scenario. I've seen cases exactly like that, and I expect many others here have too.

Here's a anecdote that shows how this stuff can make a real difference. A company was making little gizmos that cost them $120 to produce. I was hired to update the design and get production cost below $100 if possible. The previous engineer didn't really understand RF emissions and grounding. He had a microprocessor that was emitting lots of RF crap. His solution to pass FCC testing was to enclose the whole mess in a can. He made a 6 layer board with the bottom layer ground, then had a custom piece of sheet metal soldered over the nasty section at production time. He thought that just by enclosing everything in metal that it wouldn't radiate. That's wrong, but somewhat of a aside I'm not going to get into now. The can did reduce emissions so that they just squeaked by FCC testing with 1/2 dB to spare (that's not a lot).

My design used only 4 layers, a single board-wide ground plane, no power planes, but local ground planes for a few of the choice ICs with single point connections for these local ground planes and the local power nets as I described. To make a long story shorter, this beat the FCC limit by 15 dB (that's a lot). A side advantage was that this device was also in part a radio receiver, and the much quieter circuitry fed less noise into the radio and effectively doubled its range (that's a lot too). The final production cost was $87. The other engineer never worked for that company again.

So, proper bypassing, grounding, visualizing and dealing with the high frequency loop currents really matters. In this case it contributed to make the product better and cheaper at the same time, and the engineer that didn't get it lost his job. No, this really is a true story.

At least for this capacitor you seem to be able to place it on the top layer. If you would place it there at the same coordinates you would shorten the distance between cap and IC pins by at least 80% (you also have to calculate the PCB's thickness). I would definitely try to do so. You can even move it a bit closer. Don't listen to Russell :-) when he says that it doesn't make a difference if you need the via anyway; it's the distance between cap and the \$V_{DD}/V_{SS}\$ pins that counts.
Also, depending on the CPLD's power needs the 10nF may be a little bit small, though this might be more of a problem for FPGAs than CPLDs. Depends both on the number of gates and the clock frequency. Still, when I use a 10nF cap I place a 1\$\mu\$F cap in parallel, with the 10nF the closest to the pins.
Daisy chaining your loads on a single power trace is not a good idea. Instead make the power supply's output a star point and connect your different devices on different traces, each with their own decoupling.

edit
Your third screenshot is definitely the best, decoupling-wise. (I would even let the traces go straight down.) I see no problem with the ground plane, nor with vias connecting to it. Just don't place the via between the cap and the CPLD pins. Distance caps-CPLD should be very short, if possible even shorter! :-)

edit 2
I didn't pay attention to the package first, but your fourth screenshot makes it obvious: your caps' packages are huge. I see Mark made a note about it as well, and I agree with him: switch to a smaller size. 0402 is pretty standard these days, and your PCB assembly shop may do 0201s as well. (AVX has 10nF X7R in 0201 package.) A smaller package will allow you to place the capacitor closer to the IC, yet still leave room for neighboring traces.