My requirements are:
I need a UPS system which supplies power to a 9 volt modem. UPS should Charge 12v battery (SLA , charging curent 800ma), and it should have overcharge/discharge protection system [optional: it should show the battery capacity with four leds(25% interval)]. I want to achieve this without using ADC.
I can make 230V AC to 12v DC converter with step down transformer. Switching from mains to battery can also be achieved with two diodes. But i want to make overcharge/discharge with led indicator which i cant figure out without ADC. Is there any way to achieve this without microcontroller and ADC. Any suggestion would be appreciated. Thanks in advance.

I am thinking about something like this. I have designed this circuit on my own. But i have no idea how to link these two switches to charge level indicator. 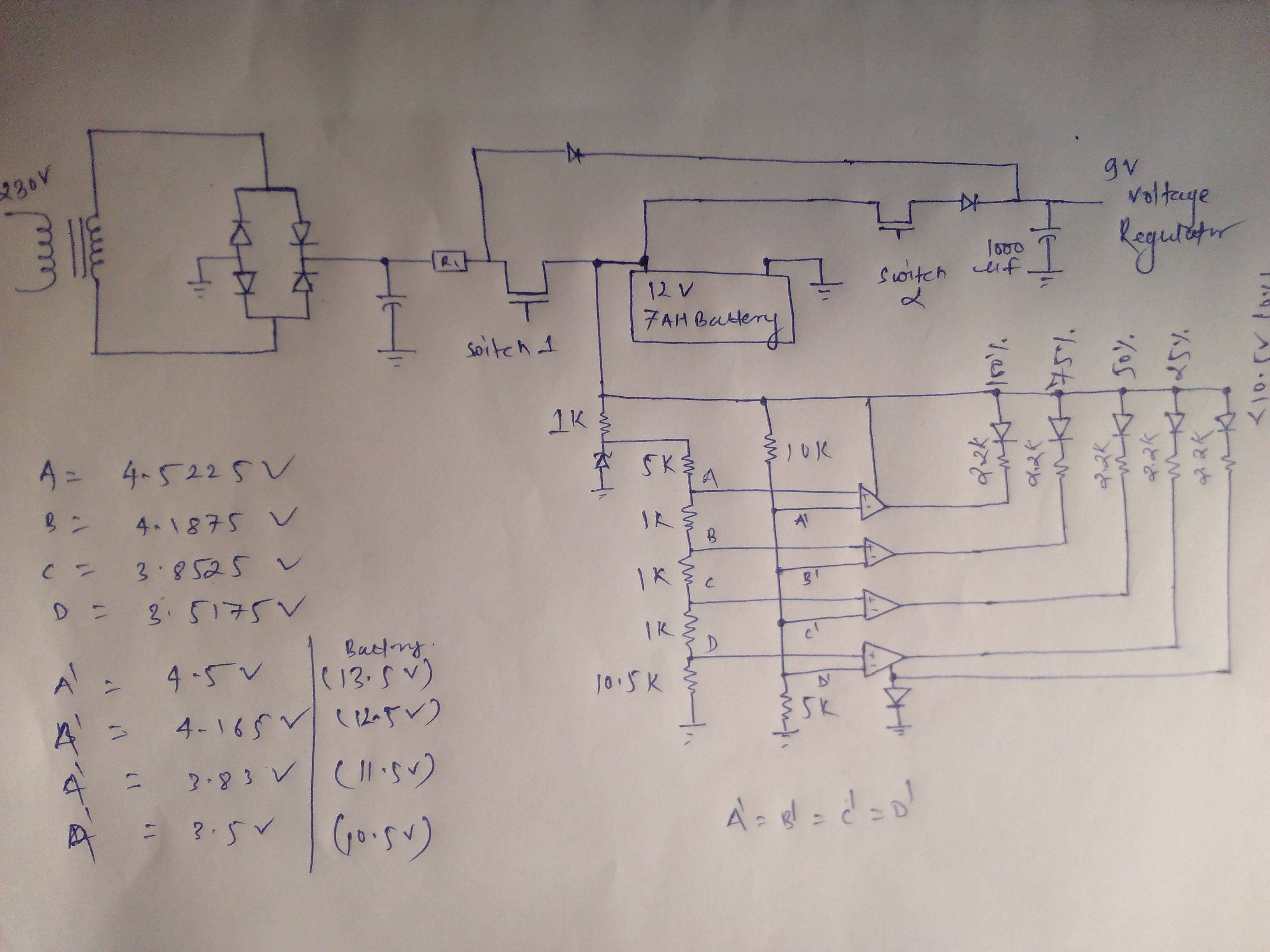 If you are concerned about trying to use one switch to change from (Charge battery, power device from AC) to (power device from battery,) then what you need is a single pole double throw (SPDT) switch.

Electronic – What’s wrong with the UPS

You can roughly assume about a 50% efficiency when operating in this manor. With that assumption, lets look a bit about the power you are using.

Lets first convert to Watts as this will be the universal unit that can be used across voltages. 5 Amps at 12v is 60 Watts. I don't know anything about your communication system, but I will assume it could be pulling 60 Watts. If you take into effect the 50% efficiency, you will be pulling 120 Watts from the battery. It is a little hard for me to see the graph, but it looks like this will almost cut your life in half to about 11ish hours.

So 11ish hours is what you should be expecting at 25*C, but you are at -5*C, to make things easy I will assume it is actually at 0*C when you account for some electronics around it keeping it a little warmer. At this temperature you should be getting 85% efficiency, which brings your life down to 9.35 hours.

This is still more then the "less than 9 hours" that you are seeing, but I have also only roughly given some values. So I would say what you are seeing real world is within tolerance of my rough calculations meaning that there is nothing wrong with your UPS.

As a side note, I usually see people place backup generators in places that they might expect power outages for extended periods of time. The battery backup is there to pickup for the brief period before the backup generator kicks on and then also handles the transition back to grid power. Also many systems implement a battery backup that accesses the battery directly as to not have the DC->AC->DC conversion. I have seen this in security systems among many other places.

My thought would be to leave all 3 batteries connected to the UPS at all times plus add a 'proper' lead-acid charger as well. This charger would be a proper 2-stage or 3-stage charger with automatic float - equalization switching.

However, you need to be aware of a probable safety issue: the batteries are most likely LIVE with respect to ground when the UPS is connected to the incoming AC Mains. That's because there is NOT any isolation from the AC Main in most low-power UPS units.

That's one of the reasons that the battery terminals are so well insulated in small UPS units.