I'm looking for a MOSFET driver circuit that can be placed between an op-amp
and a power MOSFET to operate the transistor as a linear amplifier (as opposed
to a switch).

I'm developing an electronic load circuit that must be able to step a load in
about 1µs. The most important step size is small, say 100mA, although once
I get that worked out I'd probably like to also attain a large signal step
speed of 2.5A/µs. It should accommodate sources from 1 to 50V, currents from
0 to 5A, and will be able to dissapate about 30W.

Here's what the circuit looks like at present. Since appearing in earlier
questions I have replaced the MOSFET with the smallest capacitance device I was
able to find (IRF530N -> IRFZ24N), and moved to a reasonably wide bandwidth,
high slew-rate op-amp (LM358 -> MC34072) while staying in jelly-bean territory.
I'm currently running a gain of about 4 on the op amp for stability purposes,
which gives me a bandwidth in the neighborhood of 1MHz. Further background
below for anyone interested. 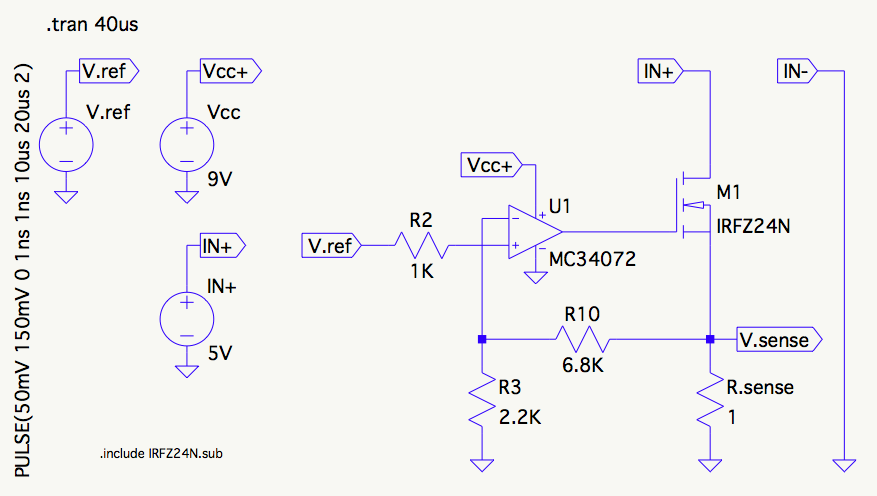 While the circuit performs reasonably well, the problem now is that the
stability is, well, not stable 🙂 It doesn't oscillate or anything like that,
but the step response can range from overdamped (no overshoot) to quite
underdamped (20% overshoot, three bumps), depending on the source being loaded.
Lower voltage and resistive sources are problematic.

My diagnosis is that the incremental input capacitance of the MOSFET is
sensitive to both the voltage of the source being loaded as well as Miller
effect produced by any source resistance, and that this produces in effect
a "wandering" pole from \$R_o\$ of the op amp interacting with the
source-dependent \$C_{gate}\$ of the MOSFET.

My solution strategy is to introduce a driver stage between the op-amp and the
MOSFET to present a much lower output impedance (resistance) to the gate
capacitance, driving the wandering pole up into the tens or hundreds of MHz
range where it can't do any harm.

In searching for MOSFET driver circuits on the web, what I find mostly assumes
one wants to "switch" the MOSFET completely on or off as quickly as possible.
In my circuit, I want to modulate the MOSFET in its linear region. So I'm not
finding quite the insight I need.

My question is: "What driver circuit might be suitable for modulating the
conductivity of the MOSFET in its linear region?"

I saw Olin Lathrop mentioned in passing in another post that he would use a simple
emitter follower for something like this from time-to-time, but the post was
about something else so it was just a mention. I simulated adding an emitter
follower between the op amp and gate and it actually worked wonders for the
rise stability; but the fall went all to heck so I'm figuring it's not quite as
simple as I might have hoped.

I'm inclined to think I need something roughly like a complementary BJT
push-pull amplifier, but expect there are nuances that distinguish a MOSFET
driver.

Can you sketch out the rough parameters of a circuit that might do the trick in
this instance?

The circuit was originally based on the Jameco 2161107 electronic load kit,
recently discontinued. Mine now has about 6 fewer parts than its original
complement :). My current prototype looks like this for those who, like me, are
interested in that sort of thing 🙂 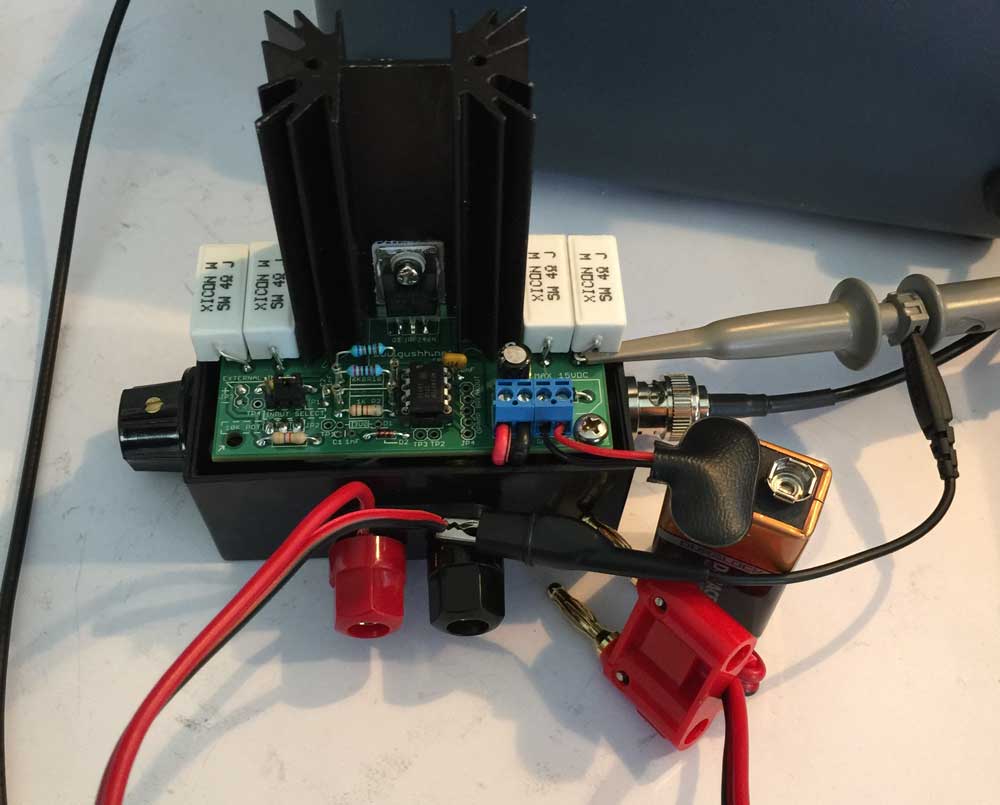 The source (generally a power supply under test) is connected to the banana jack/binding posts on the front. A jumper on the left of the PCB selects internal or external programming. The knob on the left is a 10-turn pot allowing a constant load between 0-3A to be selected. The BNC on the right allows an arbitrary waveform to control the load at the
level of 1A/V, for example, with a square wave for stepping the load. The two light-blue resistors comprise the feedback network, and are in machined sockets to allow the gain to be changed without soldering. The unit is currently powered by a single 9V cell.

Anyone who wishes to trace my learning footsteps will find the excellent help
I've received from other members here:

I'm thoroughly amazed that a simple project like this has been so rich
a motivator for learning. It's given me occasion to study quite a number of topics that would have been so much dryer if undertaken without a concrete objective in hand 🙂

This is indeed an interesting problem, because of the variation of effective load capacitance with the load resistance due to Mr. Miller, and your need to not overcompensate it.

I suspect a biased push-pull BJT output driver would work fine- maybe 4 small BJTs (2 connected as diodes) a couple bias resistors plus maybe a couple ohms each of emitter degeneration. 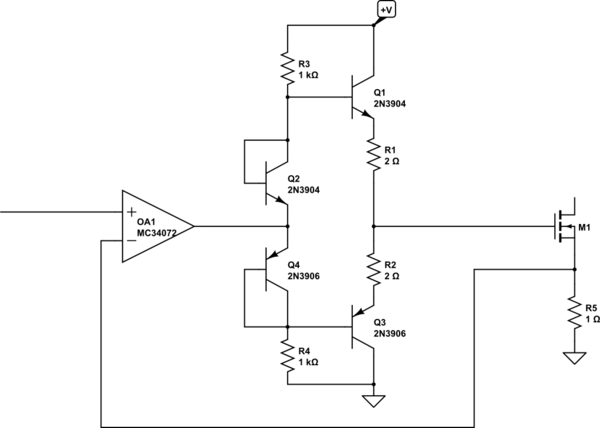 If I was doing this I'd be tempted to throw a beefier, but still fairly inexpensive, amplifier at it such as an LM8261 instead.

I would add a resistor in the connection from the sense resistor to the opamp negative input and then add a capacitor from the output of the opamp to the negative input of the opamp. This can then give you a dominant pole that rolls off the gain before the phase shift in the output stage gives significant phase shift. It cane useful to put resistor in series with the feedback capacitor to give better gain at higher frequencies.

The resistor in the gate of the MOSFET can be useful for stopping high-frequency instability - a value of 22-100 ohms is appropriate there.

Electronic – How to measure gate capacitance

This answer does not address how to measure FET \$C_{\text{iss}}\$, because there is no real value in doing that. Since capacitance is such an important FET parameter, the manufacturers provide capacitance data on every datasheet that is definitive in almost every situation. (If you find a datasheet that doesn't provide full data on the capacitance, then don't use that part.) Given the data in the datasheet, trying to measure gate capacitance yourself is a bit like trying to take a picture of Yosemite while Ansel Adams is there to hand you that picture he took.

What is worthwhile is understanding the characteristics of \$C_{\text{iss}}\$, what they mean, and how they are effected by circuit topology.

Interpretation of these seemingly simple, but subtle facts can be tricky and confusing.

Wild and Unsubstantiated Claims Regarding \$C_{\text{iss}}\$ -- For the Impatient

The effective value of \$C_{\text{iss}}\$, of how it is manifest, depends on circuit topology, or how and what the FET is connected to.

Of course, the second claim describes the most common use case for hard switched FETs, and is what Dave Tweed talks about in his answer. It is such a common use case that manufacturers universally publish Gate Charge charts of it, along with circuits used to test and evaluate it. It ends up being the worst possible maximum case for \$C_{\text{iss}}\$.

The good news here for you is that if you have accurately drawn your schematic, you don't have to worry about the Miller plateau, because you have the case of the first claim with minimal \$C_{\text{iss}}\$.

Let's derive an equation of \$C_{\text{iss}}\$ for a FET connected as in your circuit. Using a small signal AC model for a MOSFET such as Sze's 6 element model: 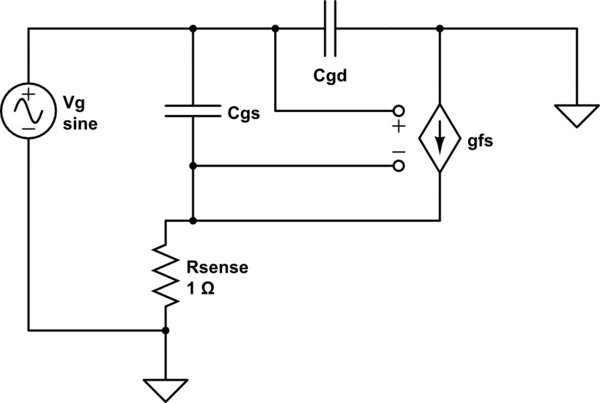 Now, the second fractional term doesn't do anything until frequency is well above 100 MHz, so we'll just treat it as unity. That will leave the first fractional term, the integrator term, which is the capacitive impedance. Then rearrange to get the effective \$C_{\text{iss}}\$ that matches the topology:

Let's look at the response. I'll use a Nichols chart here because that will show open loop and closed loop response simultaneously. 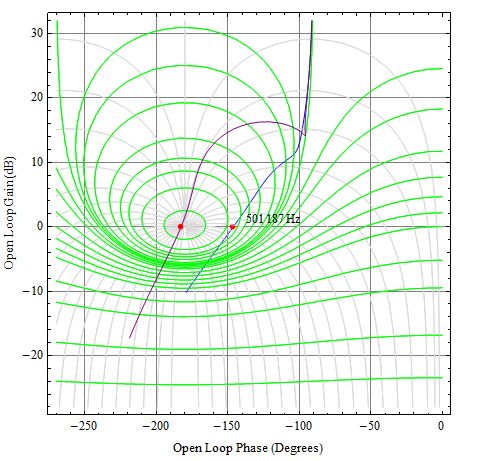 Here, the rectilinear grid is the open loop, while the contour lines show the closed loop (green contours for dB magnitude and gray contours for phase). The blue curve is \$V_{\text{ds}}\$ of 25V, and at the crossover point (at the red dot -- 502kHz), phase margin is indeed \$35^{\circ }\$, and closed loop peaking of about 5dB.

The purple curve is for \$V_{\text{ds}}\$ of 3V, and the corresponding open loop phase margin is ~ \$-3^{\circ }\$. For the closed loop, look at the ascent of mount Nichols, the curve pretty much nails the peak which would ideally correspond to infinite peaking. Of course that won't happen, but the system would be unstable.

It is no surprise that the main problem here is the open loop output impedance of the LM358. Even with a FET-circuit topology that has minimal expression of \$C_{\text{iss_eff}}\$, the LM358 is not adequate. An amplifier with open loop impedance of 50 Ohms or less and phase margin greater than \$75^{\circ }\$ would probably solve the stability problems.