i need some advice how to prepare digital electronic circuit.

I have 64 signal lines, every line have a NO tact switch with latch . I need desiplay how much "1 or ON" signal i have and display this value on two 7segment displays.

difficulty:
i can't use microcontroller/microprocessor/fpga or equivalent device.
only mux/demux/counter/decoder and other "simple digital stuff"

every tip will be helpful
thanks!

My idea is: connect 65 resistors in series 64x100Ohm + 1×6.4kOhm(Like a shunt resitor). Every single resistor from 64 will be connected parrarel with button if i click the button then i will have a bigger voltage drop on 6.4kOhm resistor. The voltage drop on 6.4k resistor connect to flash adc and then move out signal from priority encoder to 2x7seg displays.

If you want to take many inputs that's not the proper way. As you have 64 input lines so you need a 64-bit ring counter and a clock source. As a 64-bit ring counter isn't available, you need to couple some 8-bit shift registers. Each output would be connected to a switch through a diode. And the other terminals of all switches need to be short-circuited and pulled down through one 10K resistor. The short-circuited bus is the output bus and the status of this bus is needed to be checked at the falling edge of each clock pulse. This is done through the AND product of the output bus and inverted clock signal. As you need to count the 1, so just connect the output of AND gate to a counter. 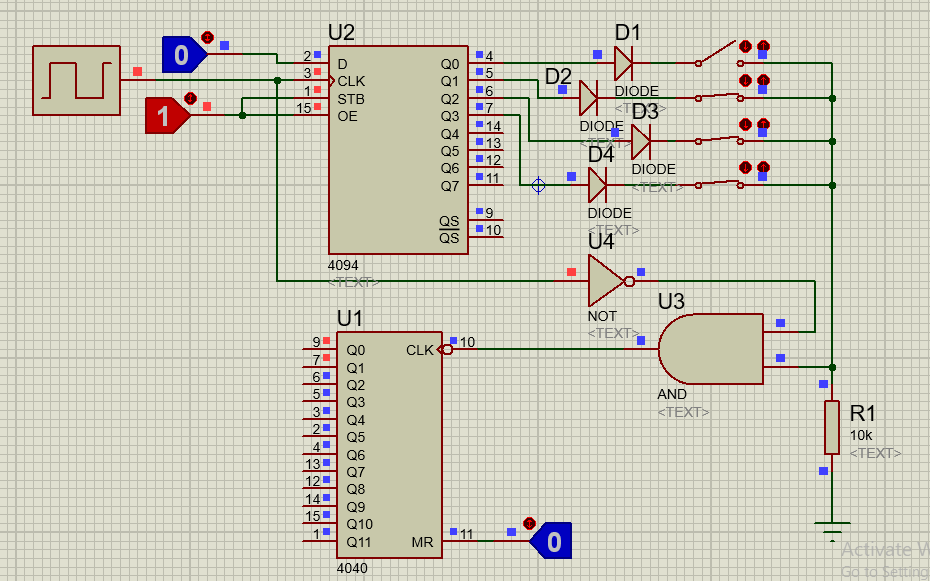 In addition, the counter has to be refreshed after each 64 clock pulse elapsed. I can't help you with how to display the counter value in 7 segment display right now. But you will find enough resources about that on the internet.

Electronic – How to decode morse code with digital logic

There were some hobbyist experiments (in the early '80s, I believe) with decoding variable speed digital data with the intent of being able to distribute code to accompany magazine articles by printing it as bar-codes. The reader (person, not machine) could then scan it into their machine with a hand-held scanner. It was assumed impractical (until shown otherwise) due one's inability to hand-scan at a uniform speed.

The solution ended up being for the decoder program to initially collect enough white-black to black-white transition times to discover the mean wide-bar and narrow-bar times, assign '1's and '0's, respectively, to the collected data, and continue decoding the incoming stream while simultaneously updating the wide-bar and narrow-bar mean times to account for changes in the wand speed over the bars.

The same technique was applied to decoding hand-sent Morse off the air, with a simple circuit going high and low with the receiver's audio output, fed to a similar algorithm.

Your hardware decoder would need to be similarly adaptive.

As an aside, an interesting issue came up when the words 'T5' or '6E' appeared frequently in the decoded text. Operators naturally developed keying habits on common words, and would key (and understand) f/ex, the word 'the',

which the decoding algorithm, doing its best with slightly uneven element spacing and a result string that didn't match any known Morse character, got one of the above digraphs.

You might find some of the articles in early issues of Byte Magazine at the library.

Electronic – Differences between a FET multiplexer and regular digital multiplexer

You are looking for an 8 to 1 MUX with a very fast propagation delay <10ns.

THe Analog Mux is a passive switch, is bi-directional (1:8 or 8:1) but meets your speed requirements if you can provide low impedance source and some terminator resistance (passive or active).

The Digital MUX is unidirectional 8 to 1 with complementary buffered outputs are slower. Both have OE for a similar tri-state output.

If you are considering digital MUX's and need optimal speed, it would seem the ANALOG Mux will satisfy your requirements. THere will be glitches on the output signal during address transitions from high output impedance and capacitance, but that's normal. There will be some source loading effects when output load is connected to each input, but Ok for say low 50 ohm source and say 500 ohm terminator.

If using this for an analog MUX/DEMUX then time constants will different from specs according to difference in RC loads and transmission line effects.