There's a google competition going on at the moment called the little box challenge. It's to design a very efficient AC inverter. Basically the inverter is fed a DC voltage of a few hundred volts and the winning design will be chosen by its ability to produce a 2kW (or 2kVA) output in the most electrically efficient manner. There are a few other criteria to be met but that's the basic challenge and the organizers state that an efficiency greater than 95% is a must.

That's a tall order and it got me thinking about it just as an exercise. I've seen plenty of inverter H bridge designs but they all drive PWM to all four MOSFETs meaning there are 4 transistors contributing to switching losses all the time: – 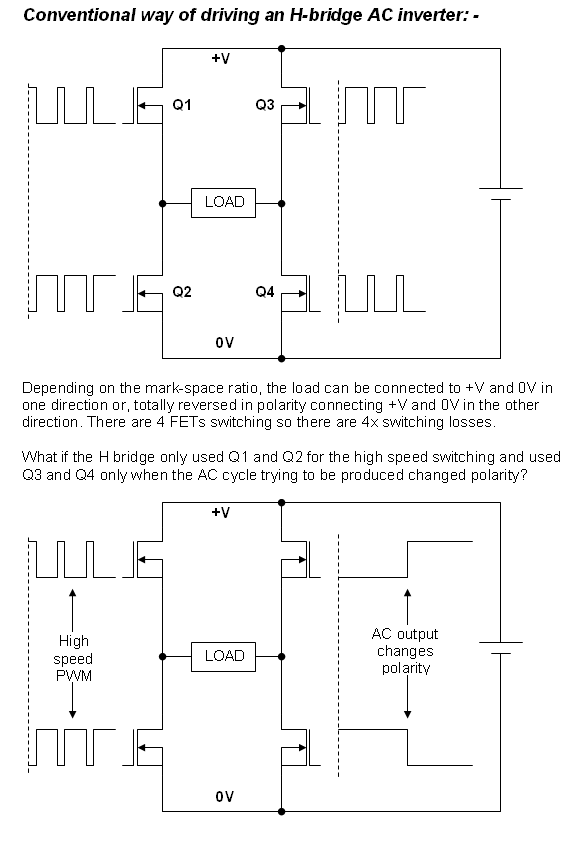 The top diagram is as I normally read about inverter designs but the lower diagram struck me as a means of cutting switching losses by virtually 2.

I've never seen it before so I thought I'd aske here if anyone else had – maybe there's a "problem" that I don't recognize. Anyway, I decided not to enter the competition if anybody wonders why I'm posting this.

EDIT – just to explain how I think it should work – Q1 and Q2 (using PWM) can generate (after filtering) a "smoothed" voltage that can vary between 0V and +V. To produce the first half cycle of a power AC waveform, Q4 turns on (Q3 off) and Q1/Q2 produced the PWM switching waveforms to make a sinewave from 0degrees to 180. For the 2nd half cycle, Q3 turns on (Q4 off) and Q1/Q2 produces an inverted sinewave voltage using the appropriate PWM timings.

Can it be done? Yes

Has it been done? Yes

Will it do as expected? half the switching losses? Yes & if care was taken over the right-leg device selection trading speed for conduction losses then you could further improve the powerCore losses.

Such a scheme does struggle at zero-crossing so the effect on THd would have to be evaluated and determined if it is an accepted limitation. 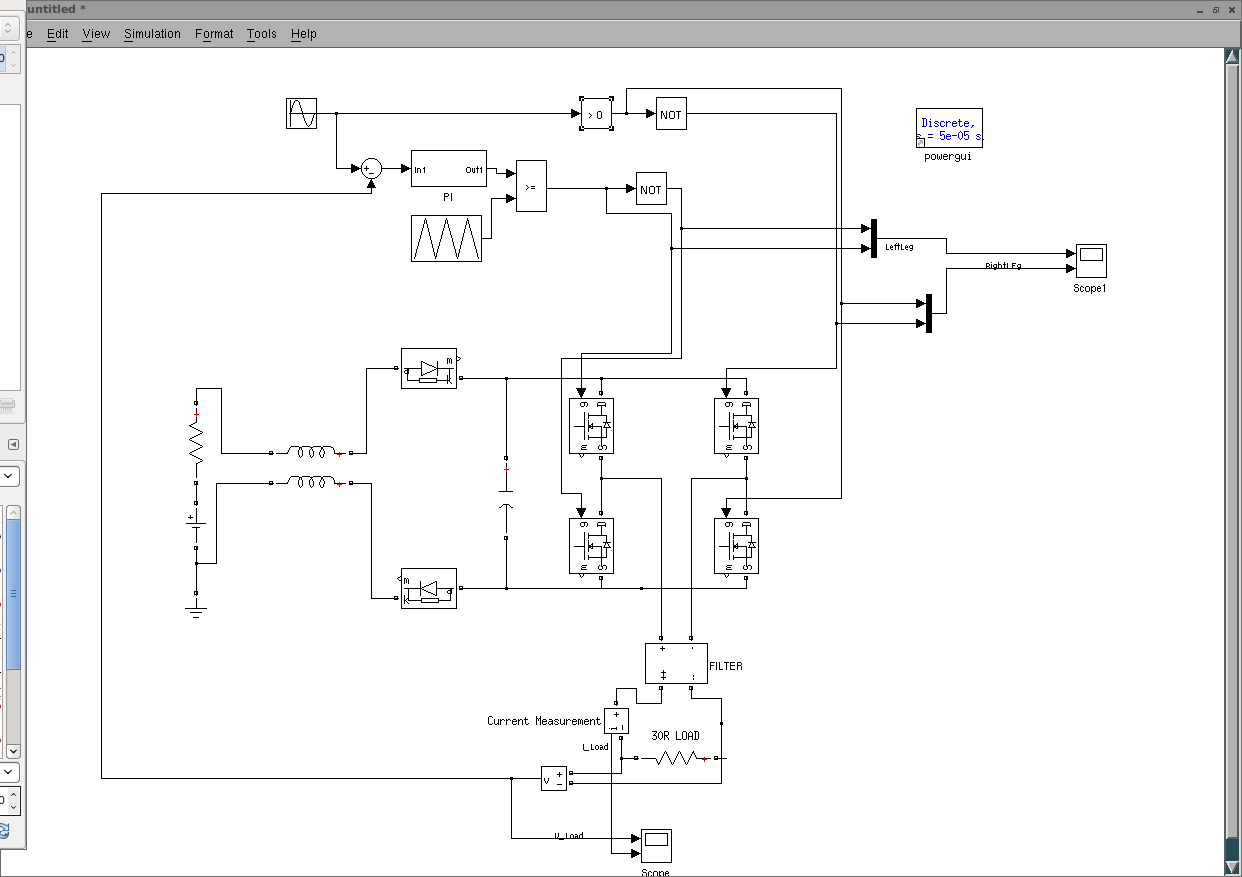 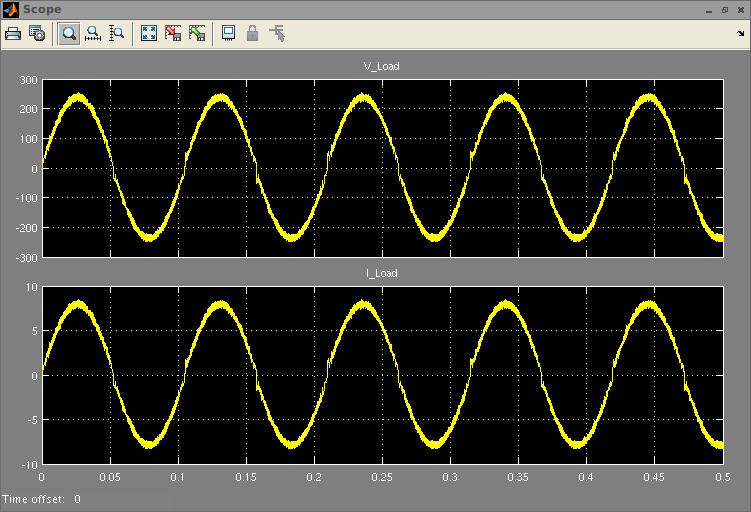 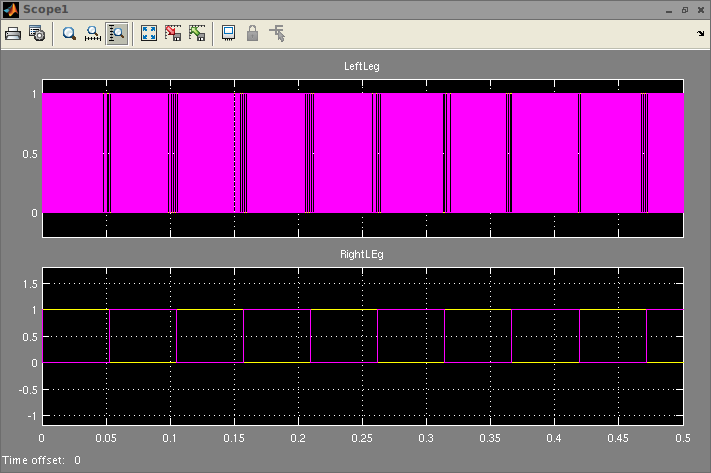 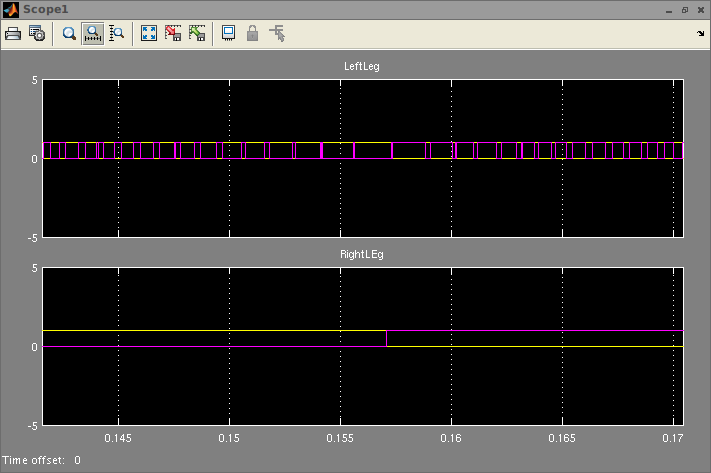 I'm guessing you're trying to drive some AC motor that was originally designed to run on 50 Hz AC.

A few people don't use a translation circuit at all; they directly connect the left HIN and LIN and the right HIN and LIN directly to 4 independent output pins of the microcontroller, and hope that the software doesn't have any bugs that would set the FETs to the self-destruct state.

I prefer using a digital logic gate, such as the external NOT gate you mention, to enforce this "avoid the self-destruct state" condition in the motor driver hardware, rather than software.

It looks to me that the IRS2113 (like many other "high-side drivers") uses a boost circuit that can't really produce a 100% "ON" in the high-side transistor; it assumes that software will periodically turn that transistor OFF, so your software might need to limit the maximum PWM duty cycle to a maximum of something like 255 ticks HI + 1 tick LO.

The simplest (in hardware) approach is to drive the entire H bridge/motor system in one of two basic states of the H bridge: either

State 0: The microcontroller PWM output is LOW. This drives the left LIN and the right HIN, turning the corresponding FETs off. That output also drives a NOT gate which drives HI the left HIN and the right LIN, turning those corresponding FETs ON. This in effect connects the motor's left wire to HI and the motor's right wire to LO. If things stay in this state long enough, the motor turns in the direction I call "forward".

State 1: The microcontroller PWM output is HI. This drives the left LIN and the right HIN, turning the corresponding FETs ON. ... This in effect connects the motor's left wire to LO and the motor's right wire to HI. If things stay in this state long enough, the motor turns in the direction I call "reverse".

With a PWM running at reasonable speeds, setting the duty cycle to 50% HI, 50% LO, you end up with the motor stationary (possibly humming a little).

This 2-state (bipolar) system is sometimes called "Locked-Antiphase". a b

State 3: Some people use a third state turns off all the FETs, letting the motor freewheel. (If you manage to turn off any 3 of the 4 transistors and leave the other one ON, that also works just as well as a freewheel state). If things stay in this state long enough, the motor "stops". (In some cases, external forces spin the motor in one direction; the direction is not under the control of the electronics).

Alternate State 3: Some people use a third state that turns on both the lower FETs, turning off both upper FETs, which slows down the motor ("brake"). (Others turn on both the upper FETs, turning off both lower FETs; that also works just as well as a "brake" state). If things stay in this state long enough, the motor stops. (Even when external forces push the motor in one direction, this "brake" generally causes the motor to stop).

There are a variety of ways to implement digital logic between the microcontroller and the FET driver that supports trilevel drive, but also avoids the self-destructive states. (Some motor driver chips such as the IXYS IXDN404 include this anti-shoot-through direction/PWM translation circuit, but the IRS2113 does not).

You might think that these circuits would have 100% LO, 0% HI PWM duty cycle give "idle" (in either direction), and 0% LO, 100% HI give "full speed" (in whatever direction the "direction" line indicates). But lots of people use a direction/PWM translation circuit that does something more confusing, and then fix it up in software.

Electronic – wrong with this simple SMPS

Yes, there are stability issues and a brief moment when both FETs are on but the beauty of using a FET on the pull-down part of the circuit (i.e. a synchronous buck converter) instead of a schottky diode is this: -

I'd also advocate building a 555 timer sawtooth generator as the basis of your system. Something like this: -

What you get is a half-decent synchronous buck convertor that just needs an input to the other comparator input to get the required duty cycle changes. OK so far? Then you can apply a simple control loop that lowers the 2nd input to the comparator as the input voltage gets bigger. Get this working and then apply another small control loop that actually regulates the PWM with load current changes a tad and this would probably work and no negative feedback involved.

Then, as the final touch, and with care and subtlety apply an overall control loop to keep the output better stabilized but remember, with a sync buck you can pretty much get half-decent stable performance without control loops that use negative feedback - if you are wanting to go this approach I can recommend it.

However, for me, I'd just call on Linear Technology and get the device that already does the job.