Many solar panels are watt-rated. The generated power depends on lighting conditions, so either the current and/or voltage is variable. Which one is it?

Solar cells are a PV junction, basically a diode so they have similar characteristics. The voltage is dependent on the amount of energy received from sunlight and the amount of current drawn, so it is load dependent. 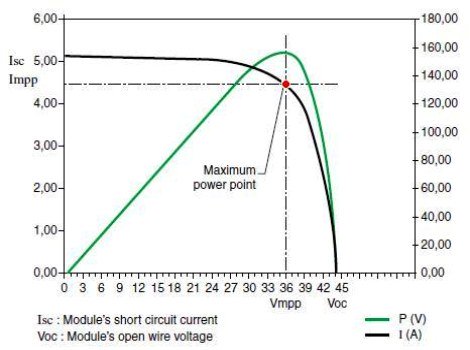 Many solar panels are watt-rated. The generated power depends on lighting conditions, so either the current and/or voltage is variable. Which one is it?

This image better answers your question, you can see how drawing more current drops the voltage. At a certain point when the load impedance is equal to the source you will get maximum power transfer (shown in the smaller lines on the graph). The different light levels are represented with different colors (W/m^2 is how many watts of sunlight is striking 1 m^2 of area), and lower light levels generate different amounts of power. The problem is there are three variables voltage, current (which are dependent on the load) and the amount of power received by the cell.

So, you need a circuit that can track the maximum peak power point (MPP Tracking or MPPT) to get the best efficiency from the solar cell. Either that or make sure you aren't drawing too much power from the cell to keep the voltage level high.

I assume that the panels are both of the same nominal voltage - ie made for use with the battery voltage you are using. If a 12 V battery they are probably 36 x PV cell panels with a nominal voltage of about 18v. This allows them to be loaded to about 80% of their rated no or low load voltage and still do all the things that a lead aci battery may need done to it.

IF they have the same Maximum Power point voltage (Vmpp) then they will parallel up well.

If Vmpp of one panel is lower than that of the other the low Vmpp panel will take most of the load until the load exceeds the panel capacity and then the other one will join in. No harm will be done but loading is not even.

This imbalance occurs because the low Vmpp panel will produce a greater percentage of its output at a given voltage.

If you REALLY want balance (and there is no real reason to have it) then place a resistor of value about R = 0.5/Imax in series with each panel where Imax is the maximum rated current of the panel concerned. These resistors will drop (by design) half a volt at full power which should be enough to help them track each other. Power rating of resistors = > 0.5 x Imax.

*Iuse 15V as a guess at likely Vmpp

Putting the two dissimilar panes in parallel is not a good idea. Mostly, the higher voltage panel will deliver most of the current and the low voltage panel does little.

If the two panels have similar current ratings but different voltage rating, you can put them in series to get the sum of the voltages at the single current rating. Then use a switching power supply to buck the higher voltage down to what you want. For maximum voltages under 30 V, it's actually not hard to make your own buck converter. There are many off the shelf chips that you only need to add a inductor, diode, and a few other parts too. You can even make your own with a microcontroller if you want to learn more about buck converters.