I recently got a desktop LED lamp, and I feel a "strange" slight vibration when touching the metal case. I found that other devices also have high voltage on their case.

What is the reason/trade-off to design the PSU that way? Are "real" transformers inefficient? Even if it's harmless, why is the high voltage connected to the metal case, and not just through insulated wires? 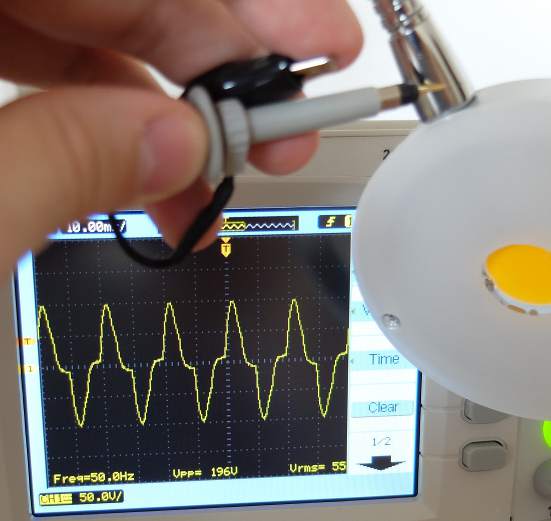 When I turn the lamp on, the setup in the picture measures the power line (220V) 214Vpp (59Vrms). When I also touch the metal case, the voltage drops down to around 30V. 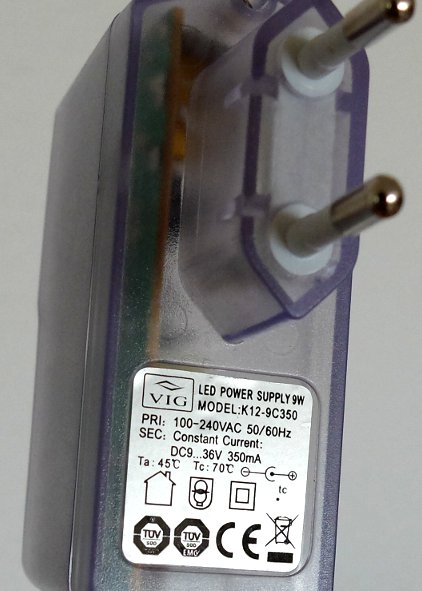 Your oscilloscope reads 196Vp-p - this is definitely not 220VRMS AC. 220VRMS has a peak to peak value of about 622Vp-p. So this is the first thing - it hasn't got a live connection to the case.

So where is the voltage coming from - it's more than likely a capacitive coupling from the AC side of the Power Supply/Plug to the secondary side that feeds the LEDs. Don't worry your LEDs won't be seeing this - they'll be seeing the correct voltage across them but both leads to the LED will be dancing up and down at 196Vp-p or maybe a bit higher.

The plug/Power supply has no earth connection so the safety of the device relies on having sufficient "transformer" insulation so that if you touch the metal of the lamp, there isn't enough current/voltage to produce a potentially harmful effect.

How does the 196Vp-p get onto the metal of the lamp? Inside the plug there is a switch mode power supply that uses a transformer and high-frequency power switching to produce the DC supply to the LED. The transformer primary and secondary winding have to be in close proximity (simplification) so that they work efficiently. Unfortunately, because of this you can't avoid small capacitive connections between primary and secondary (proximity through an insulator) and this is inducing the 50Hz 196Vp-p signal your are seeing on the metal case.

The capacitance is very small - probably less than 100pF and at 220Vac 50Hz this could produce a current of less than 100 micro-amps - this is confirmed by you touching the metal case - your own body resistance/capacitance to ground/earth is forming a potential divider with the transformer capacitance and lowering the voltage to 30Vp-p.

It's not ideal of course and some folk would be worried by this but I don't believe it is a cause for concern.

Side-story A friend of mine who was rewiring his house many years ago borrowed my mulitimeter to check the voltage on the earth wire before he bonded it to ground - he measured 120VAC (240VAC supply) and he couldn't understand what was going on. Basically the live wire and the neautral wire were sharing their respective voltages capacitively to the earth wire. There was no physical connection and I told him not to worry and go-ahead and ground the earth wire.

AC probing is safe so long as your multimeter is rated for the full AC mains voltage you'll be playing with, and the probes that you'll be using are insulation-rated for that voltage as well. Most reasonable-quality multimeters are OK for 120VAC work. Make sure the probe wire insulation doesn't have any breaks in it.

The meter will present a voltage measurement resistance in the megohm range, so there's no real risk of damaging anything (yourself, the meter or the tablet).

The reason this is confusing is because the ideas are confused, mixed up in the word "ground".

Sometimes “earth(ing)” is used to refer to the concept of electrically connecting to the earth, allowing “ground” to be used for the concept of “a part of the circuit we consider to be 0 volts”.

Some say Ground is just a reference point for measuring voltages

That's one of the meanings. You have some device, some circuit, and say that this conductor is 0 V and measure everything else relative to it.

If the device is isolated (battery powered and not hooked up to anything else), then it's truly arbitrary, but if you have connections, signal or power cables, to something else — power supply, digital signal, analog audio signal, whatever — then the expected electrical characteristics are generally such that the two devices share the a common 0 V reference — a common ground.

(If there's a problem so that one of the devices is causing current to flow along different parts of the system that should be the same “ground”, that's called a ground loop.)

some say ground is a safety device for appliances

The safety device here is the presence of a connection between the chassis of the device (generally, any exposed metallic parts) and the “ground” conductor of the electric circuit, which is also joined to earth. The safety comes from the idea that if somehow the chassis gets joined to line voltage (“hot”) and current will flow to the “ground” (and perhaps trip a breaker or GFCI/RCD device) instead of through you when you touch it (as you are a higher-resistance connection to earth).

A bare pice of metal is never “a ground” by itself. It's just common, for safety reasons and for electrical design convenience, to design things so that all exposed metal is joined to, or a part of, the circuit's “ground”.

Can you not be safe just by touching a hot wire alone, granted you don't touch neutral?

If you jump in the air and poke the hot wire, you're certainly safe. If you're touching anything else, like what you're standing on, you might be able to make a circuit.

What if you touch a hot wire then, stick you other finger in the dirt (soil)?

So its telling me that the current flow from a hot wire, to the grounding wire-> (connect to some rocks and dirt/poop) is so high, it can trip a breaker?

Depends on the kind of dirt, and how wet it is. If it's sufficiently conductive, the circuit consists of the incoming electric service (hot branch) → house wiring → you → dirt → service ground connection at the breaker panel → service neutral. (That is if your wiring is like USA wiring, at least.)

In a DC situation there is no hot wire, and

This is true but misleading. The reason we use the term “hot” with AC only is because AC voltages reverse all the time and so we can't just say “the positive wire” or “the -5V wire” or such. A way to describe either case would be to say “not at 0 V”. (Nominally in that resistance in wiring means that almost nothing is at exactly 0 V.)

(correct me if i'm wrong) but if I have a 350v Capacitor fully charged, there is absolutely no way for me to get electrocuted unless I touch both terminals.

If you had a 350 V AC power source that was isolated, then you could touch one terminal and be just as fine as in the capacitor case.

(Well, mostly fine. Because AC can pass through capacitors, and lots of things are a little bit like capacitors, there could be some current flow, though not much if the other terminal isn't connected to anything and therefore has no opportunity for capacitive coupling of its own.)

But your household AC line supply is not isolated — the neutral side is joined to earth — so it is not safe in this way.

people say step 4 is to ground that wire, How? The car is insulated from the earth All I see is an open circuit.

What they're not showing in the picture is that the “Yours” car is assumed to have the negative battery terminal connected to the car's metal frame, thus completing the circuit in the picture.

The reason for that hookup scheme is not anything about the electric circuit itself — it's because the final connection when current starts to flow may make an arc for a moment, and you want that arc to be away from the battery so it doesn't ignite any hydrogen gas that may be in the vicinity. (Mistreated lead-acid batteries electrolyse their water and thus produce hydrogen gas.)