It depends on the LED driver, but unless it's of a bad (or very specific need) design, a dimmed LED lamp will draw less power.

Usually, dimming on LED lamps is done by PWM (Pulse Width Modulation). The LED will actually turn on and off faster than the eye can see. By modulating the ratio of the time the led is on and off, it simulates the dimming to the human eye.

This method is widely used because it is the cheapest and easiest method to dim an led but it can also cause some eye fatigue.

With this method the power will reduce with the light intensity (or perceived intensity).

Another method of controlling the light intensity of an LED is to control the current flow through the LED, and there are mostly 2 ways of doing it:

in this case the current will reduce with the intensity of the LED. With this method, there will be little flicker, which will be roughly equivalent to the DC/DC converter ripple.

In this situation, the current will diminish but this circuit will likely have more losses.

The latest has the advantage of providing a very stable light intensity (if needed for some specific application perhaps like photography), so we can imagine this exists on the market.

The power will be reduced when the light intensity is reduced, but it's not a linear factor. F.I. 50% dimming might not have a 50% decrease on the power consumption.

The reason is that the control electronic will have some non-linearity and won't have the same efficiency at different operating condition and the second reason is that the eye intensity response is not linear to the actual light.

For the parallel connected LED and lamp, each has the entire battery voltage across.

When series connected, the voltage across each must sum to the battery voltage.

While typing this answer, I see that you've added some pictures. It appears that the total battery voltage is about 3V. Given that many LEDs have a forward voltage in excess of 2V, this leaves less than 1V across the bulb.

Do you have a voltmeter with your kit? If so, measure the voltage across the lamp for the series connection.

Electronic – LED glowing when the driver’s ground is cut off

Internal to the module, there are some diodes to protect the inputs. Typically these are ESD diodes, but they will conduct DC current if you reverse bias them. It's not a strong power source, and you have resistor limiting of it, so it's not very bright. The current flows from D1, into the driver VDD (weakly powering the module and LED), to the GND net, through the internal ESD diode, out to R1, and then to ground either through the DAC or R2. Note that this will make the DIM pin voltage less than the effective VSS of the module, which would command a full intensity. It may also be possible that the base-emitter junction is going into avalanche and your current is going that way. Typical V_eb max values are about 5V, and if the circuit worked you could be seeing up to 24V there.

When Q1 is shorted, that increases the current flowing through R1 by placing R_L in parallel with the module. This effectively reduces the voltage available to the module by a bit, and pushes the available supply below the minimum required for operation. 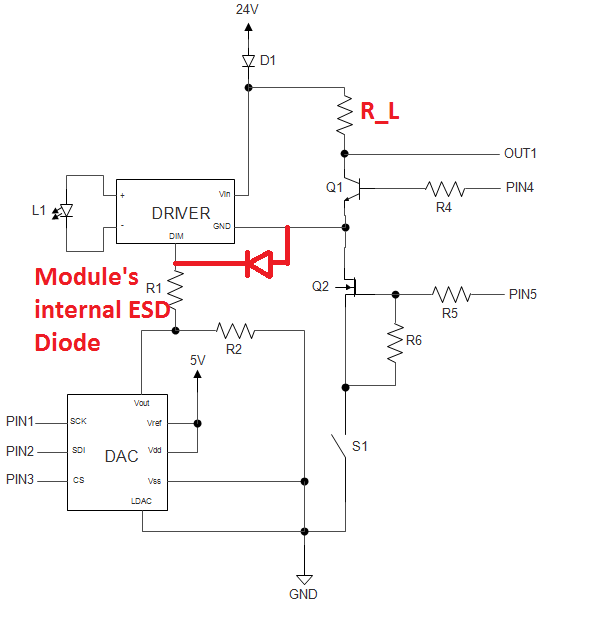 What should you do:

This module has an enable pin! You can get the desired functionality with minimal changes by putting a pull-up to 3.3V or 5.0V (either one works), and then using your microcontroller-enabled MOSFET. If you want to have the pull-up with the 24V supply, then you'll need to make a voltage divider to reduce the voltage (the PWM pin can't tolerate 24V). You could also get rid of R5 and replace it with a 3.0V Zener diode to be safe. Since most microcontrollers start with inputs disabled, you might be able to do away with everything except the voltage divider resistors. In that case, you could omit M1 and R2 in the schematic below, and directly connect your PIN5 to the enable.