I have been doing an extensive amount of reading on EM (Electromagnetic) Telemetry in MWD (Measurement While Drilling) applications. From my reading, there are a few considerable gaps in my understanding which I am trying to fill.

Now this is how I understand the theory works. Just behind a drill bit, a gap sub is placed which provides an electrical isolation from the two ends of the drill pipe. This isolation creates an altered voltage between the two sides of the gap sub. An electric field is emitted (and orthogonally a magnetic field) from the gap sub. On the surface, an antenna is created using a ground rod and the top of the drill string. This antenna is used to retrieve the signal created by the EM field. That signal is then decoded to retrieve the data.

First, many of the sources stated that the signal generated is on the order of 5-10 Hz. If this is the case, would not the antenna have to be several hundred kilometers wide (since wavelength = speed of light / frequency) in order to retrieve the signal? This leads to my second question. All of sources stated that an EM FIELD is generated. An EM field is not the same as an EM wave. How does a field have a frequency? I feel like I am overlooking something fundamental here in regards to EM theory.

Lastly, a co-worker and I had a very long discussion about how this works. He stated that an EM wave actually isn't emitted at all, but a voltage gradient is created across the gap sub. He also stated that the drill string is essentially used as one leg of a transmission wire and the earth is used as the other. In other words, the drill string is used to transmit data up to the surface and the earth is used to receive data from the surface, or vice versa. To me, this is just seems plain wrong, but perhaps I am the one mistaken. If this was the case, would not the two sides of the transmission wires (the earth and drill string) essentially short themselves out since they are in constant contact with each other? His reasoning was that current follows the path of least resistance and thus will not dissipate to the earth but travel up the drill string to the surface.

Any help, insight, or other reference is greatly appreciated. Here is about the best image I could find to help describe the general theory http://www.netl.doe.gov/Image%20Library/technologies/oil-gas/natural-gas/projects-n/ep/DCS_31103.jpg

Mud pulse telemetry is the standard means of transmitting telemetery signals from the drill head to the surface - it modulates the pressure of the mud coolant down the drill pipe and this can be received at the surface but naturally data rates are fairly slow.

Here's what Halliburton say about EM communication and paraphrasing this I expect it means the following: -

Low frequency EM wave - I expect this means the magnetic portion of the EM wave as used by pot-holers comms systems. The E part of the wave wouldn't survive many feet in mud and earth. See this as evidence of using magnetic loop antennas and lowish frequencies. The guy writing the article suggests that: -

My thoughts on this subject were that the near magnetic field radiated by a magnetic antenna is not greatly attenuated by calcareous rock, and that the radiated field should penetrate into the earth at least the distance of a quarter of a wavelength at the transmitting frequency.

If a low modulation frequency were used (say 100kHz) then this will have a wavelength of 3km as an example. But I don't see why even lower frequencies shouldn't be employed. The data rate is a few tens of bits per second and if you said 100 max, a modulation frequency of maybe 1kHz would do the job BUT making a magnetic resonant antenna at 1kHz is a little more difficult but possibly no more difficult that making a search coil to a metal detector. See also this wiki article on the subject.

There is also this article on rescuing trapped miners and being able to contact them: - 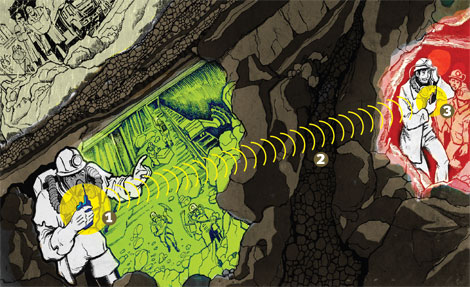 And if you need more information, contact Halliburton on sperry@halliburton.com