I'm a student making a simple Arduino-compatible board similar to the Pro Micro and am going to put a USB connector on the board.

The schematic in the above link doesn't show any kind of EMI/ESD protection circuitry, and I've never used any in the previous boards I've made, but this time I did some research and found this is recommended.

I'm reading an Atmel application note giving recommendations for USB interfaces and it has the following: 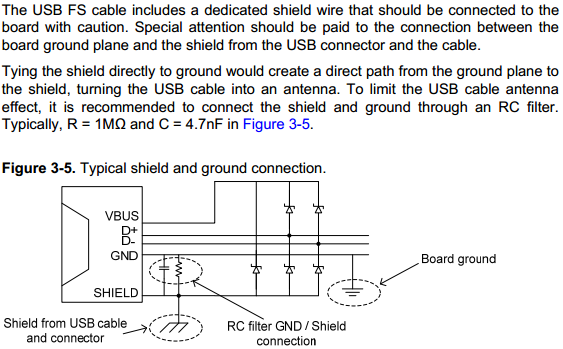 There are a few similar questions on here, but I still am unsure of a few things:

Thanks for your advice.

You need an USB application-specific TVS array with sufficiently low capacitance as to not distort the D+ and D- signals. NXP also has a good application note on the subject - the note you cited also mentions it (see page 5).

Essentially, ordinary TVS arrays have sufficient capacitance to distort the edges of the D+ and D- signals, causing issues with the USBIF-mandated eye diagram test. This loss of signal integrity can interfere with communications and is a sure-fire way to fail USB certification.

Many suppliers market USB-specific TVS arrays for ESD protection. They will be rated appropriately - i.e. you don't need to worry about voltage rating etc. - just get one that is intended for USB and you should be OK.

As for the SHIELD connection, you are correct - it is the metal casing of the connector and the braided shield of the USB cable that connects so it, which is likely referenced to protective Earth somewhere on the PC side of things. For EMI reasons it should not be directly tied to the GND signal connection, but should be connected through some impedance. I've seen both parallel resistor / capacitor (as you've shown) and ferrite bead connections between them.

I am not sure, what the question is, but i know what did you forget. You have also to protect the gate driver. This is because between the gate and the drain (and source) there is some capacitance which in case of ESD discharge will just conduct, so a voltage surge is possible on the gate.

upd. in case of such surge one of the implications may be opening the valve. not very nice.

Almost every charger and regulator out there nowadays has an absolute max of 6V. If you have a USB rated TVS and some capacitance on the 5V bus, you probably won't have problems there. You can use a high voltage cap if you want, and put it close to the barrel jack.

For buttons, use a series resistor (as large as you can accept without causing problems with your pullup or pulldown) and a shunt cap. Put the resistor near the button and put the cap near the IC where the signal goes. You probably don't need TVS on the buttons, but it is a good idea to put it in the layout (close to the IC) in case it is needed. A wide variety of 0402 sized ESD diodes are available. If you have a large series resistance between the ESD gun and the IC, the ESD diode will not have to dissipate much energy. The capacitor will help prevent steep dV/dt.

The two main problems you get from ESD are:

Rarely does ESD damage anything other than an IC input.

Also make sure you consider case 2. Any reset inputs or interrupt inputs need to be scrutinized. An internal 200k (or whatever) pullup may not be enough. You may want to add either a cap, or a stronger pullup/pulldown.

Finally, the best defense against ESD, when possible, is to keep the gun away from the components by recessing them within a plastic housing. That is mainly a mechanical design issue, though. If the gun tip cannot get near the components, there will be no discharge in the first place.