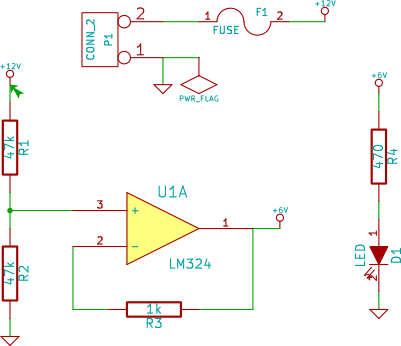 The CONN_2 component is supposed to receive external power. I have not made any changes to any pin configuration of it which I probably should. How do I
correctly do that?

I think the power flag is preferred and is what I usually use (and what the documentation recommends IIRC) to stop ERC errors if pins are not set to power output (see below) In the above you just need to put a power flag on pin 2 of the fuse and the warning should go away.

Also, you can set a component pin to a power (i.e. GND/VCC) output and no power flag will be needed.
Notice the 6V net does not have the same warning, I think as the opamp output will be set to an output.

Edit - just confirmed this works fine, so if you have e.g. a battery symbol then set the pins to power output and there is no need for flags. With a typical linear voltage regulator you would set the OUT pin to power output. This is common in all PCB software I have used, you need to make sure you set the pins to the correct type (not just power) when creating a component so the ERC can work properly. Here are the types available in Kicad: 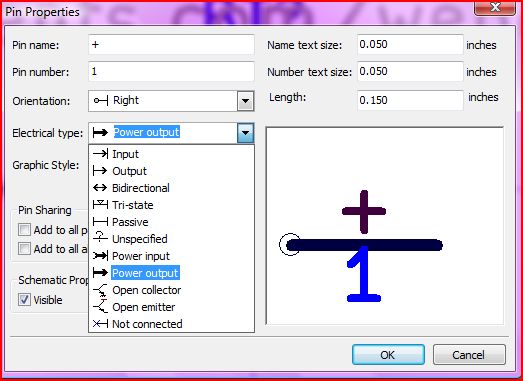 The error only occurs (correctly) if a net has nothing to drive it, so if you have something like a power connector which has passive pins (if set correctly) it won't know they are intended for power until you tell it explicitly.

You can actually decide what you want to be told about, bu setting the table below accordingly. For instance if you wanted the ERC to throw an error if an input was connected to an input you would change the topmost box from green (no message) to yellow (warning) or red (error) 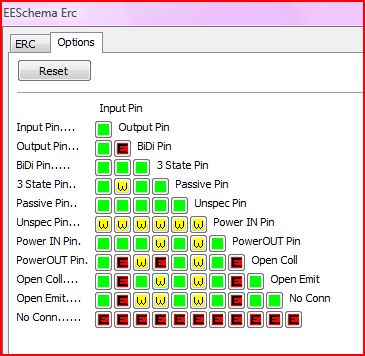 You are connecting a passive (C5) to an power input pin (AREF). Since Atmega32 allows internal VREF, pin 29 should properly be labeled passive. Since it is not, you can either change the library part or add a PWR flag to the line right next to pin 29.

Electronic – KiCad ErrType(3): The GND PWR_FLAG pin isn’t being driven according to ERC

Yes and no. It's simply a ground symbol and, more precisely, it's a schematic component which is no different from any other component. Electrically it is a single pin that is defined as power input, that's all.

All of the components under Power library are power-flag symbols, take a look at their description.

Now let's talk about the Power Flag itself, which is almost always confusing for a new KiCad user.

The power might come from the regulator that has a pin defined as power output, and in this case we don't need any power flag. We have a single regulator that has a single output pin, everything is fine. But the power might also come from an external power source and arrive at your connector. Let's assume it's +12V. We want to designate it as +12V in Eeschema and hence we will add a +12V component from Power library. Creators of KiCad could have defined +12V component as power output, but in that case we would not be able to use it in multiple places in our schematic because, remember, that only one power output is allowed per power line. Hence they defined it as power input. But if there is no power output in your schematic, then your power inputs are not connected to anything and we get this annoying error message saying "ErrType(3): Pin connected to some others pins but no pin to drive it". So the trick is to add a separate component named as Power Flag, which basically says "I know what I'm doing, power is coming from somewhere else, so please be quite". The Power Flag is nothing more than a single pin component that is defined as power output. When we add it, all of our power inputs are driven now and ERC (Electrical Rules Checker) is happy. It is all done to leverage the ERC to help us. Btw, if you connect two Power Flags to the same power line (+12V or GND for instance), you will have ERC error saying that there is a conflict because of two power outputs connected together.

The same principle applies to GND: it is simply a power input pin that we use in our schematic for convenience in many places. Because it is power input, it formally needs a single power output, that's why we need a Power Flag on the GND line. You can also take a look at KiCad official Eeschema documentation section 8.5