Quite a few decades ago (either late 70's or early 80's), I vaguely remember seeing on TV a demonstration of, what would now be called, mirroring of a CRT screen, that was over 30 meters away, without the use of any cables, fibre optics, wires or what have you – this was "through the air" (as described at the time). Hence, the output of the computer that was connected to the CRT could be seen, even though the "hacker" was not at the actual computer's console.

The TV article raised fears about spying, Soviet espionage, etc. – as was usual in those days.

Irrespective of the geo-politics behind the potential for espionage (involving the misuse of this technology 40 years ago), how was this mirroring actually achieved back in the day1?

I haven't been able to find a recording of the clip yet, but I will update this question when I do.

Thanks to Michael's comment, the video in question is this: TEMPEST – Protection from Computer Eavesdropping ~ BBC Tomorrow's World… which sort of has the answer in the video title!

1 Please note that I have no desire to reproduce this effect today, using either CRTs or with flat screen technology. At the risk of repeating myself – I merely wish to know how it was achieved back then.

After searching a bit more thanks to Eugene's comment, I found this, where it states it can be done from hundred meters, even without very expensive equipment.

Oscillating electric currents within your monitor produce radio frequency electromagnetic radiation (EMR) that correlate to what the monitor displays. In cooperation with the BBC in February 1985, van Eck was able to confirm through experimental proof of concept that this form of electronic eavesdropping is possible from distances of up to several hundred meters.

While such danger to information security was already known at the time of van Eck's paper, it was generally believed that such eavesdropping was prohibitively difficult for amateurs — meaning, for the most part, non-military personnel — and would require extremely expensive, specialized, restricted equipment. Wim van Eck's research showed that it can be accomplished with nothing that isn't readily available on the open market — that, in fact, "In the case of eavesdropping on a video display unit, this can be a normal TV broadcast receiver."

In this case, "smart" simply means that there's a microcontroller with firmware that monitors and validates the signals coming into the monitor. This microcontroller also manages the user interface of the monitor itself, and generates the on-screen menus, status messages, etc.

There are some incredibly exaggerated claims about the supposed dangers of CRTs on the interwebs. Some people think they are

As someone who has gotten the odd jolt from an anode connector and deliberately destroyed a few CRTs (and one accidentally) they're not so bad. The HV circuit that powers a CRT is dangerous enough and you should make 100% sure that it's not powered and fully discharged. The mains voltage is dangerous too, and some TV sets had electrically hot chassis. Dielectric absorption (a kind of non-ideal behavior of the capacitor dielectric) can cause the output capacitor to appear to recharge itself a bit so avoid contact even after it is unpowered and discharged. Some cretins on the interwebs think this phenomenon is caused by wind and the earth's rotation or some such thing.

There's an anode connector on the side of the back of the CRT. You should discharge it to the black aquadag coating on the outside of the CRT when the connector is removed. It holds enough energy to give you a jolt and possibly trip or drop the CRT. If fully charged the CRT capacitance can hold approaching 1J of energy, which is of a similar order to what you'd feel grabbing an electric livestock fence- not an especially pleasant sensation. It will typically mostly leak off in a few hours or days, but discharge it to be sure.

Here is what Thompson says for a typical color CRT: 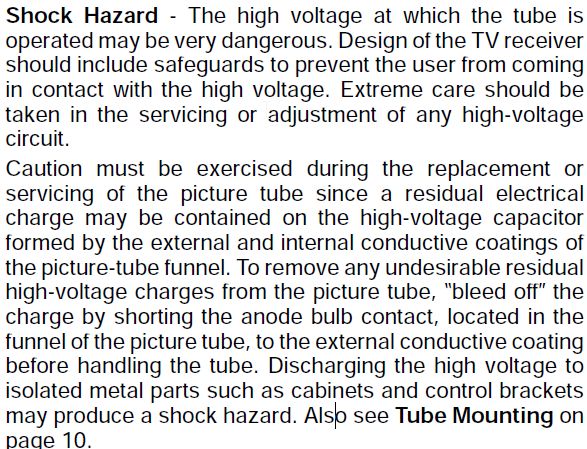 Danger from implosion is not huge, but caution indicates wearing safety glasses (!) -your eyes are irreplaceable- and gloves when the back of the tube is exposed. If the tube neck or filler pip is broken the air generally just whooshes in and that's it. If the tube is dropped from a height- it generally just breaks, no great drama. Here is what Thompson says about that- to the people who would handle them every working day in television assembly factories and service shops:

I suspect these stories got progressively exaggerated like 'Chinese whispers' as nobody wants to see a friend or a junior injured. If there is one substantiated instance of a person being killed by a CRT I have yet to see it. Really old color CRTs (the round screen type) might pose special dangers, and those sets emitted significant soft X-rays in operation until leaded front glass was universally used.

As an aside, television sets did start hundreds of fires in the early years. In the UK the rate was measured at more than 5 per 10,000 sets in 1948. Part of the cause was that the EHT was originally derived from the mains transformer. Using the horizontal flyback switching transformer greatly improved the safety. As recently as the mid 1990s televisions in the U.S. were reported to have caused about 20 deaths per year (0.5% of the total) and around 1300 fire 'incidents' per year (0.27% of the total).

Originally TV sets were designed so that when the back of the enclosure was removed to expose the set (including vacuum tubes which the user might take to the local drug store to test) the power connector came off. This interlock could be defeated by a so-called cheater cord. Don't do this. 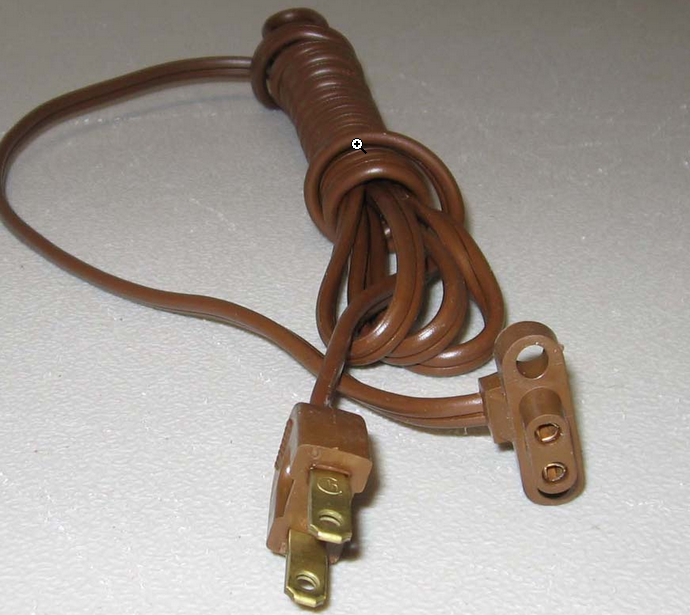 TL;DR The CRT itself poses some additional considerations that need to be taken into account, but mostly worry about the mains and the high voltage supplies required by the CRT.