I've been amassing a pretty large collection of these old scopes, and it's about time I got to trying to fix them.

About half of the ones I run across and buy don't have traces. I don't need to get them in perfect working order again, but I'd at least like to get a trace on them. So what do I look for first?

I know resistors' values change over time, and the capacitors are big culprits, right? What about CRTs? Do they just "go bad" from sitting for 50 years? And what about the transformers? I can't really see a transformer just going bad, because you'd have to somehow manage to break one of the windings in it, correct?

Anyway, thanks a heap for the help.

Get ahold of the service manuals first. Make sure you are experienced enough to be comfortable working safely with multi-kV voltages such as all CRT scopes use. There is quite enough voltage and current capability in a CRT scope to be lethal. If not, then stop now.

Check all the power supplies- both voltage and ripple, electrolytic caps die with age, particularly the ones in the power supplies that see a lot of heat and ripple current. Measure the ESR of the electrolytic power supply caps and compare with expected values. Most older scopes will not have low-Z caps so the ESR might be a few ohms. You can usually do a quick check in-circuit if the cap is discharged.

Some- the ones that use hybrids, for example, may not be realistically repairable.

Most parts, other than capacitors, don't die from age, at least not very quickly, and are just about as good at 50 years old as when they were new.

Beyond that, look at the waveforms in the service manuals, and see where they deviate. If the deviation isn't much out of spec, forget about it until you you find and fix the real culprit.

Keep in mind that failures can snowball- a failed fuse is sometimes just a failed fuse, but often there are several other parts that failed and the fuse just protected the wiring.

Inject signals at the inputs and follow them through the circuit once you get a trace etc.

I once fixed a scope that had resistors that had shifted in value by a huge amount (they had high DC voltage across them and were 1% semi-precision parts).

Oh, and if it becomes apparent that someone has already had a try at fixing it, you might want to leave that one for last or for the electronics recycling bin. 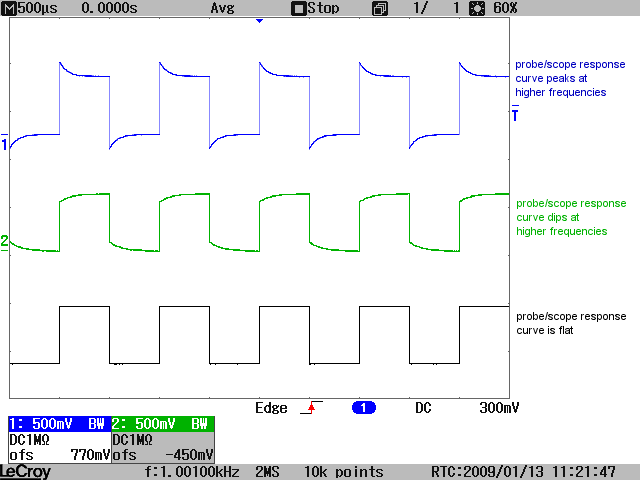 The distorted square wave signal (something like the top trace?) is due to a mismatch between your probe's capacitance and the scope's input's capacitance. Your probe should have a tiny screw-like slot to adjust the capacitance. Turn it until you see a proper square wave.
The low level you see is probably due to the probe being set to its 1:10 position.

Electronic – the red/orange coating underneath a CRT anode suction cup, and is it important

Probably it's Red Alkyd hv paint,which is rust-red in color. It might be there to halt leakage currents across hygroscopic glass surface during extremely humid weather. Older trade name was Glyptal, but its the same as any hv insulating paint, Alkyd Enamel.