The LM13700 is an Operational Transconductance Amplifier (https://en.wikipedia.org/wiki/Operational_transconductance_amplifier) converting a differential voltage into a current output. In the datasheet of this chip (http://www.ti.com/lit/ds/symlink/lm13700.pdf) you'll find many interesting application circuits.

I'm wrapping my head around the floating voltage-controlled resistor as shown in the datasheet of the LM13700 (Fig. 28, page 16):

I've copied that schematic to the figure below. All the "inner parts" of the LM13700 chip are shown black. All the external PCB-traces and external components are shown green: 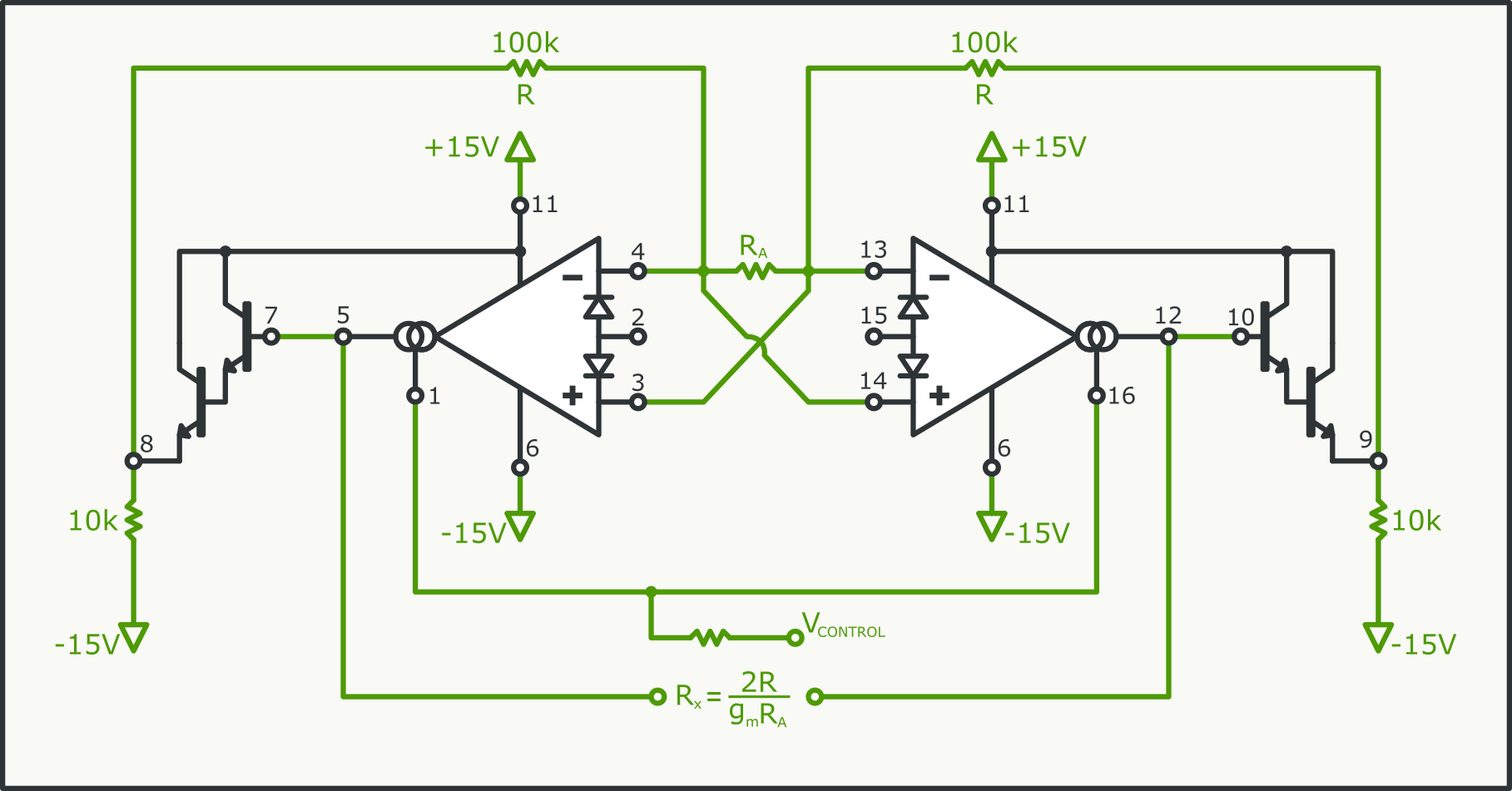 The datasheet doesn't go into a detailed explanation on how this circuit works. I'm trying to grasp it, to understand the circuit on an intuitive level. Can you help me for that?

My question has been answered by @LvW. He pushed me in the right direction, so I could make a detailed analysis (see my own answer below).
Because the resulting VCR (Voltage Controlled Resistor) has very poor current capabilities, I'm building an output power stage. Please have a look here for more details:
Power stage for VCR (Voltage Controlled Resistor) 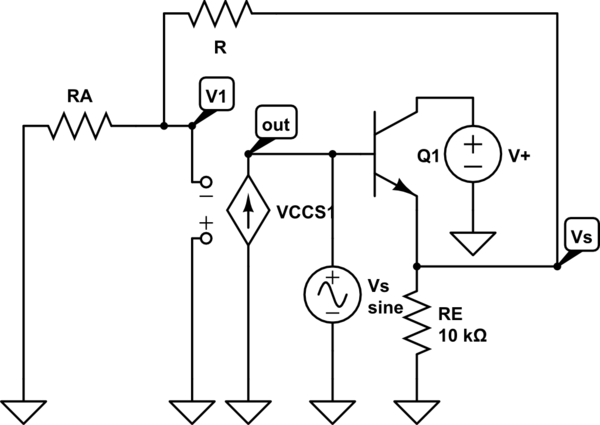 OK - let me try an intuitive explanation. The circuit diagram shows the basic method for creating a grounded OTA resistor.

Using basic OTA relations - and with Vs as a test signal source - we can write (gm: OTA transconductance):

(Here I have assumed that we have an ideal emitter follower)

The given circuit for a floating resistor is a symmetric extension of this shown basic OTA-resistor - however, with cross-coupled OTA input terminals. Hence we can expect a similar expression for Rin2.

Because in the given circuit the resistor is defined BETWEEN both base nodes of the transistor we have to use the sum of both expressions (Rin1 and Rin2 in series):

Up to now, we have not yet considered the fact that the resistor RA is connected not to ground. Instead, it has a common connection to the inverting terminals of BOTH OTAs. Hence it has a "normal" (positive) influence to one OTA (as in the basic model) and a negative influence on the other OTA.

For this reason, the influence of RA will be cancelled out in the sum of both expressions - and we arrive at the given formula:

Of course it's possible. There are many companies that provide these services. The real question is whether or not you could do this at home.

You might get away without needing a SEM (Scanning Electron Microscope), that design might be done in ~3u geometry which would imagable using visible light.

You'll need a wet bench to etch off layers, like HF for SiO2 but you will also have to remove Si3N4, SiON and Aluminum. It's possible you may need a dry etch (Ar plasma in a vacuum chamber) to remove tungsten plugs in vias.

Your main issues will be measuring the exact values of resistors and capacitors (if there are any). Delineating the boundaries of substrate implants (decoration with more nasty chemicals in a wet bench) and determination of doping profiles. The doping profiles are easily obtained in a SIMS unit (Secondary Ion Mass spectrometer) but some of the structural details of implants in the FEOL (Front End of Line) can be subtle.

There will be subtle layer thicknesses that will need to measured before they are damaged or reduced in thickness by the wet etches.

There will be significant topography of the surface of the die (CMP didn't exist then) so depth of focus might complicate picture taking.

It would be unlikely that you'd be able to get the exact transistor characteristics that the original chip had easily. You'd really need to understand not just processing but transistor physics and the role of different implants.

On the positive side, if you had multiple chips (which you would need) you might be able to liberate access to a transistor and be able to put it on a curve tracer to measure directly. The feature size is large enough and being an analog chip it would probably have some large transistors in it. But there is no certainty in that.

The other good news is that you can buy old SEM's for low cost. Only a few $10K and even though they are grainy this chip has large features. Mind you if you have a SIMS unit that also can image (it is a modified SEM) so you might get away without duplicating eqt.

Electronic – When should I be considering an operational transconductance amplifier (OTA)

What intuitions or rules of thumb would faithfully guide me on when to consider an OTA instead of a "regular" op amp; perhaps illustrated by any "classic" applications where an OTA would be preferred (and why)?

You can't really compare an OTA with a regular OpAmp. OpAmps are simple building blocks that you'll usually "configure" to do one fixed operation by adding components around it.

OTAs are similar but have the added benefit that once you've "configured" them you can still control certain aspects of the operation (lets say amplification) by applying a control current.

The key difference is, that an OTA has three inputs while your OpAmp has only two. Besides the two differential input terminals that an OTA and an OpAmp share, the OTA has a third input that lets you set the gain of the amplifier by applying a current.

This third input enables you to do things that you just can't implement with a simple OpAmp: The OTA is able to multiply two time varying signals!

The OpAmp on the other hand is able to multiply (or amplify) as well, but only one signal is time varying (the one at the differential input). The other factor that goes into the multiplication is constant and defined by the feedback resistors.

Lets say you want to control the volume of an audio signal. For a stereo signal you can use a stereo potentiometer, attenuate the signal and then buffer it using an OpAmp. Fine, but how would you accomplish the same thing if you are dealing with more than two channels? A 5.1 sound-system for example? You'll probably won't find potentiometers with more than two channels.

Here OTAs come to the rescue: You can use a single potentiometer to generate a control voltage and feed it to any number of voltage controlled amplifiers. With the turn of a single knob you can now control the volume of any amount of audio channels as you like.

Another common uses are automatic gain controls. Here a signal gets amplified based on it's amplitude. A signal with low amplitude gets amplified a lot while a signal with high amplitude will just get buffered. The goal here is to generate a signal with less dynamic range at the output. This may avoid clipping the signal and prevent low amplitude parts to be buried in noise. 20 years ago you found these kind of circuits in dictating machines, telephones, tape recorders etc. Nowadays the job is cheaper done in software.

Another big field where OTAs are used are "voltage controlled filters". Here you don't control the amplification of a signal but the cut-off frequency of a filter. Around the half of all analog synthesizer filters from the eighties are based on OTAs.

From the circuit design point of view OpAmps and OTAs are also used differently:

OpAmps are almost always used in closed-loop configuration. E.g. You'll almost always find a resistor or other component that goes from the output to the negative input. As you probably know this used to bring down the very high open-loop gain of an OpAmp down to some useful level.

OTAs on the other hand are very rarely used in closed loop configuration, e.g. you won't find the typical resistor from output to negative input. This is because they don't have the high open-loop gain to begin with. The gain of the OTAs are defined by the current going into the gain control input after all.

This has several consequences: Think about a voltage follower built around an OpAmp. The output of the OpAmp directly connects to the negative input. If you apply a voltage to the positive input the negative feedback makes sure that the voltage difference between the differential inputs is almost zero.

Since there is rarely negative feedback in OTA circuits there is also no mechanism to keep the differential inputs at the same voltage. Instead you'll find a huge voltage divider before the inputs that keep the maximum voltage difference of the input terminals at 10mV to 30mV (rule of thumb). If you go above this the OTA will become more and more nonlinear and will output a highly distorted signal.

Regarding your voltage regulator: This is really a bad use-case for an OTA because you don't need the gain program-ability feature. You could build one using an OTA, but the cool feature of the OTA would not be of any use.