According to various sources, the ripple voltage of a full-wave bridge rectifier is

I have simulated this circuit on PSPICE, circuitlab, and built it in real life:
https://www.circuitlab.com/circuit/423m43/fullwave-rectifier/

The ripple formula you have is an approximation and just to demonstrate that here's another: - 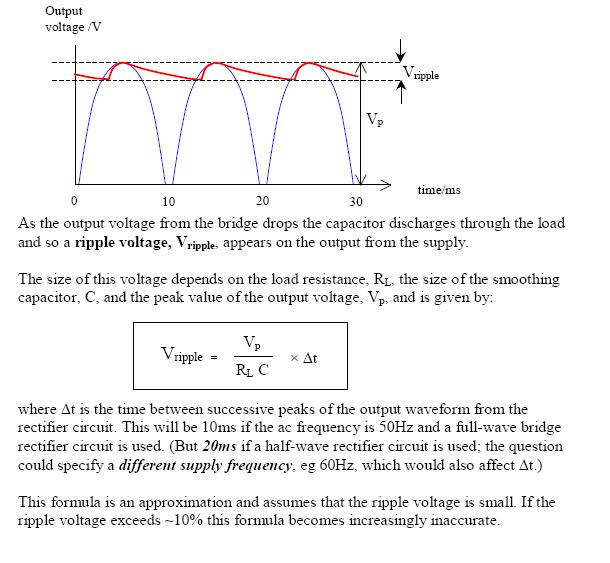 The formula used here is not too disimilar from yours but it more accurately shows the time and not the frequency as being the important factor. However, the article makes an error in stating the 10msecs should be used at 50Hz. When the diode stops conducting at the top of the cycle and when it restarts is slightly less than 10msecs.

But, in the article's credit, look at the final paragraph - small print indicating where problems with the formula might lie and of course the OP's example falls into this area where all bets are off.

In truth the decay of the voltage is exponential from the top of the peak and not-linear and this will make a difference too.

"It's only ever positive -- it doesn't alternate", I hear you thinking. OK, what if we have a square wave that alternates between +1V and -1V every 1 ms. Clearly this is AC, right? What if the edge transitions occur only every 100 years? Is it DC now? What if the device has only been on for 99 years and you don't know that it's going to change yet?

Point being, the notion of "DC" is arbitrary, and usually chosen to be something convenient for a particular circuit or situation. When voltage or current changes so slowly or so insignificantly that we can consider it as not changing it at all, it's DC.

In the case of a power supply such as you have drawn, an engineer is likely to call that "DC". An engineer understands that a real power supply will necessarily have some ripple, so you don't have to say "this is a DC with some ripple" unless the ripple is unacceptable for your application. If the engineer wants to quantify the ripple (usually to keep it under some specified maximum), then it will be treated as an AC component, and the DC component will be calculated as an average taken oven a span of time sufficiently long to average out all the variations.

If you intend to place MOSFETs across the diodes to reduce voltage drops even more you get twice the peak volts as stated before which can mean more Rds(on) for the FETs but the bridge has two FET Rds(on) drops. The CT rectifier is easier to arrange the gate drive. So all of this really has to be taken on a case by case basis. You cannot say that one is better than the other.