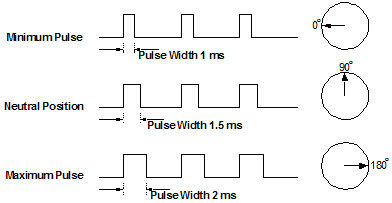 I'm not sure about how to do exact timing. The clock selection part is a bit confusing for me always.

How should I configure the timer module (TCCR registers) and how to do the timing? It's better if there's a working code example.

(I've tried using timer 0 under fast PWM mode. It gives pulses accordingly but I don't how to calculate proper timing pre-scalers. I've doubts about the primary clock used. Is it the 16MHz crystal on the Arduino board or is there some other inbuilt clock source inside the atmega2560 so that we have to explicitly mention which clock to use??)

Since the question asks for working AVR code for servo control, this article, though written for the ATmega32 microcontroller, would be an excellent resource.

On an Arduino board, the primary clock typically used for the Timer/Counters 0..n is the crystal on the board, typically 16 MHz, though some Arduinos / clone boards use 8 MHz or 20 MHz crystals as well. Section 18 of the datasheet addresses selection of clock source / prescaler from either external or internal clocks.

You do have the option of using the ATmega2560 "calibrated internal oscillator", essentially an inbuilt RC timer, but that lacks precision / stability, as might be needed for the servo signal, depending on the application. To use the internal oscillator, set CKSEL3:0 to 0010. From Section 10.3.1 of the datasheet:

An additional suggestion:
If precision of servo control is desirable, then instead of using Timer0 which is an 8-bit Timer/Counter, one of the 16-bit timer counters (1, 3, 4, and 5) would be a preferred option.

To answer the TLC5940 side of the question:

First of all, bear in mind that when using TLC5940 your intensity need not be 12-bit values (4096 values): you can use the TLC5940 using with intensities of any value 12 bits or less. For instance, 8-bit intensities (256 values) do provide a very satisfying result. More on this latter.

Assuming 12-bit intensities, here's how GSCLK and BLANK work: TLC5940 doesn't have its own clock. So GSCLK is used to figure out when to turn on and off each LED. At the beginning of a cycle, all LEDs are on. Each time positive-going edge on GSCLK is received an internal counter is incremented on TLC5940. Each LED whose intensity value is lower than the counter is turned off. So LEDs with intensity 1 are turned off after the first cycle, LEDs with intensity 2 are turned off after the second cycle, and LEDs with intensity 4096 are not turned off at all. At the end of the cycle the chip does not reset itself, rather it expects a positive-going edge on BLANK to reset it, and after this the cycle begins again.

Here's what this means for driving the TLC5940: you need two PWM outputs; one for GSCLK and one for BLANK, and the one for BLANK needs to happen every 4096 cycles of GSCLK. Now notice that we are talking about the frequncy here, and not the duty cycle, whereas it is the duty cycle that analogWrite() controls. To drive the TLC5940, you could use a library written for driving TLC5490, or you can do the lower-level driving of TLC5940 yourself, which can use one of the following approaches (assuming you are using an ATmega-based Arduino, and in scale of increasing difficulty):

Now to the question of frequency relationship between the TLC5940 clocking and the PWM. The BLANK line will have a duty cycle of 1/4096 (or whatever the maximum intensity value you are using), so that probably will not work for your servos. The GSCLK is usually 50/50 duty cycle but need not be. Lets assume that you want your LEDs to appear to be steady, and lets take the flicker theshhold to be 50Hz. This would mean that you need your intensity 1 LED to be flickering at 50Hz or above, meaning that a 4096-clock long cycle should complete in 20 milliseconds, meaning that your GSCLK clock should be at least 204kHz. At 204kHz the clock pulses are about 5uS long. So while in theory you could use the same clock for your servos and the TLC5940 (I think that's what you are asking): if you maintain the clock frequency (at 204kHz) and change the duty cycle you could control your servos and clock the TLC5940. However, if you use 12-bit intensities, then the greyscale clock needed by TLC5940 is going to be too fast for the servos.

But, if 4096 intensity values is too much to handle, consider using 8-bit intensity values. You will still have to send them as 12-bit values (that's what the TLC5940 interface expects), however, the is no law that says that your BLANK pulse must occur every 4096 GSCLK clocks. If it occurs every 256 clocks, you have yourself 8-bit intensity. So your 8-bit intensities should be sent as valid 12-bit values (with the high four bits being zero), and you'll restart the clocking cycle every 256 clocks. You can use any other number of intensity bits, as long as it is 12 or less, in the same manner. If you are using 256 intensity (=greyscale) values, then your minimum clock is 12.8kHz, and the clock duration is 78uS. Closer the 2400uS +90 pulse, but still quite far away. If we assume that +90 pulse is 90/10 duty cycle, then we calculate the clock cycle length to be 2.6mS, which translates into 375Hz clock. At this clocking, the maximum intensity value that will yield no flickering is 8 values (3 bits) at 50Hz persistence theshhold, and 16 values (4 bits) at 25Hz. You can decide whether that is good enough for your purposes.

Okay, I figured out the problem. It was simply that avrdude was trying to communicate too quickly for the default clock (8MHz internal oscillator divided down to 1MHz). Adding the -B 3 option to avrdude to set the bitclock fixed the problem (insofar as it responds with the right device ID).

Thanks to @user19579 for the Port F hint that convinced me it was powered up okay.