I'm designing a board for a client with some unusual constraints. My question is well illustrated with the following simplified example. 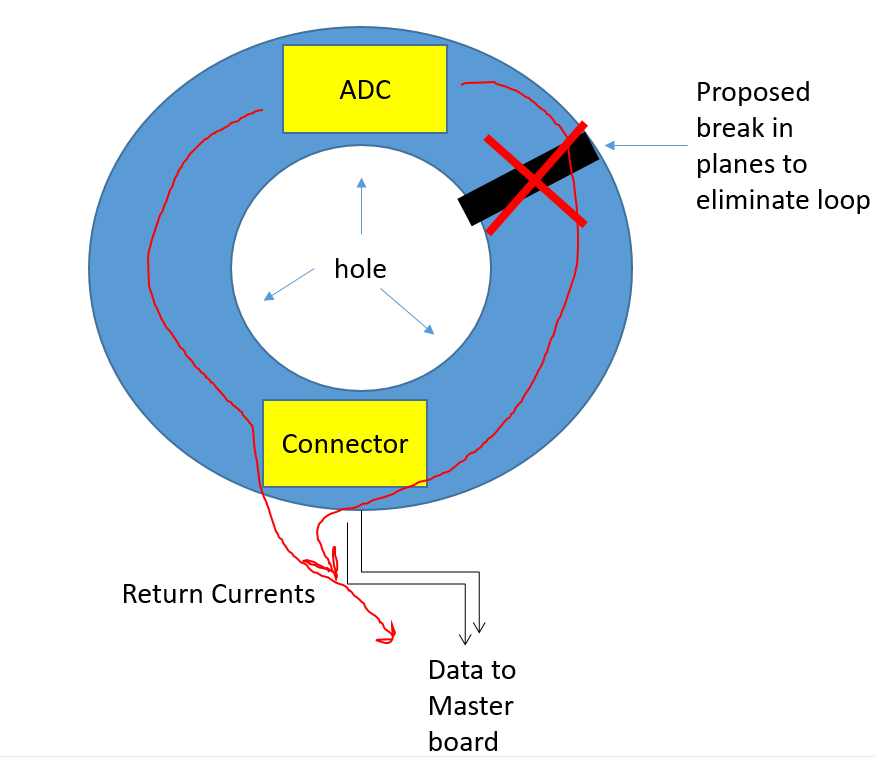 Assume the positions of everything are fixed. Let's also assume a 4-layer board for simplicity. The outer layers are signal layers, and the inner layers are two planes for Power and GND.

As can be seen from the image, there is a large hole in the middle of the board. The board will transmit data at 16 MHz (wavelength ~18m) from the ADC to the "Master" board via a connector.

Is there any concern that digital signals leaving the ADC will return to the connector in both clockwise and counter-clockwise paths?

Would it be better to break the plane such that this cannot occur?

Some quick LTSpice with arbitrary simulation parameters seems to suggest that NOT breaking the loop is the way to go. As seen below, leaving the loop decreases the return's inductance since the two paths are essentially in parallel:

For a 16-bit measurement 76uV represents 1 bit for a 5V range on the ADC, so let's look at how much current on a PCB would be needed to 'see' it on an ADC.

Let's suppose the PCB is 1" wide and 5" long (a square inch of PCB is about 0.35mΩ of resistance) so 5 square inches would be about 1.76mΩ. (you can adjust the dimensions accordingly or use a PCB calculator to get a rough cut estimate of the resistance.

Which is a substantial amount of current, for an analog design IMO. If you double the path around the circle, you get half the resistance. As far as inductive coupling to generate noise on a ground loop on a PCB, I would think you would have to have amps of current running around and within a few inches of the PCB to get mA on the PCB.

Also the inductance of the same 1" by 5" trace is more like 4nH, so coupling would be minimal, but this is frequency dependent. If that trace is doubled by forming a ground loop then the inductance would be cut in half, but then you get loop coupling.

The inductance of the cable will cause much larger problems for the common mode noise of the ADC than the PCB itself as the cable is likely to be larger than 1Ω and have mA of current running through it (which isn't a problem because the voltage reference (if you have one, or it is internal to the ADC) of the ADC will reference to the ground plane of the PCB and so will the ADC, so place the reference close to the ADC)

In short, don't worry about the ground loop of the PCB unless your running in a high magnetic \ high current environment. If you are running a 24 bit ADC, then you might want to dig into the minutiae. A 14-bit measurement, conversely would also be less to worry about it being affected by noise.

Is there any concern that digital signals leaving the ADC will return to the connector in both Clockwise and Counter-Clockwise paths? Would it be better to break the plane such that this cannot occur?

Yes, but not so much because of ground loops, it depends on if there are other loads on the board and where the reference is (if any) again you want this as close as possible to the ADC. If you have a voltage regulator, it would also be a good idea to place closely to the ADC.

It would be wise to break the PCB in two if you had switching loads, the return currents should not be able to cross under/across the ADC, so if there is a switching load, it might be wise to place it on the other side of the PCB and place a break in between the two.

First of all, before answering your questions, let me make some suggestions about the layout. I have seen your previous post and this has been a good attempt, but:

1.- The "Switching Loog" is too large. (Switching loop is Vin, Trafo, Q1 and R8, you call it,"high current loop", maybe it is no quite precise) And moreover, this loop include the control area. This is really EMI problem!! I suggest something like this.

(The controller has not a Decoupling Capacitor ? Are you sure of this?)

2.- A connector for trasformer sounds a problems maker. Could you solder your Custom Transforme in the PCB? It would be better. If you cann't, I you sugggest a 2 row 2 columns conectors. In this way you can gain more space between primary and secondary, and more space between trafo pins.

OK and now. Your questions.

1.- Yes, try to keep separate switching ground from control ground, but connect to the same ground, in your case Bottom layer. For this, try to keep the "switching loop" components together according the placement I suggest.

Connecting R8 to Vin through one track and then one via to GND is not a good idea in your current layout.

2.- Ummm... I would try another layout before consider this question.

3.- I cann't undestand this question. What do you mean?

4.- As a rule, It better If you fill the empty area with hatched copper. It improve the etching process in PCB manufactureing.

5.- As a starting point, fill as much as you can. Do you need consider any electrical isolation between primary and secondary.

What you describe does create a ground loop, but it's unlikely to cause problems because the loop is so small. The ground loops that cause issues typically involve loops measured in meters, not centimeters. That said, the definition of "small" depends on the frequencies used in your circuit, so if you're working with very high frequencies (maybe, over 100 MHz), or your mezzanine board is especially large, you may need to reconsider this.

Just like how when you're laying out a circuit board, you normally want to lay out separate ground regions in a star topology, with a single connection point; if you could arrange it, you'd also want to move your two mezzanine connectors to the same end of your board to create a single connection area for your ground connections.

But, if you simply can't change the locations of the connectors, it's almost certainly better to have ground pins in both connectors. The reason is if you remove the ground pins from one of the connectors, then the return currents for any ground-referenced signals on the other pins have to travel around a larger loop back to their origins through the other connector (the one that still has ground pins), and this is likely to cause emissions or signal integrity problems.