Correct?
What is the meaning of remaining char?
Thank you! 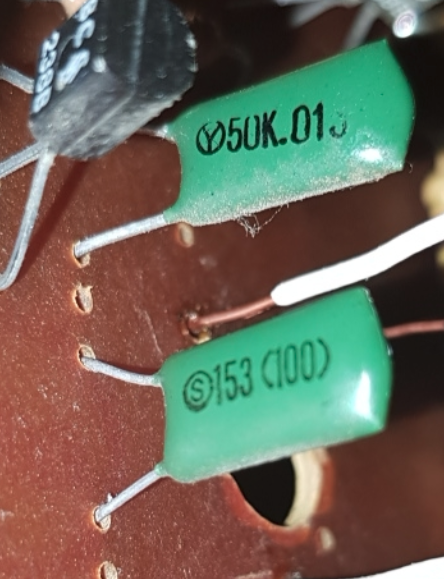 They are film capacitors, typically ranging from a few nF up to a few uF. The colour code is similar to that for resistors, and read from the top.

Your gap is too wide. Make it very, very very narrow. And rolled into a cylinder. Like a real capacitor.

Yes, +q could be less than -q, but only if the attraction/repulsion effects of electrons in the connecting wires were nearly as large as the attraction/repulsion down between the capacitor plates. (In that case the plates wouldn't be a near-perfect electrical shield for the fields produced by the wires.) But with real-world capacitors, this doesn't happen, and instead the field between the plate is totally enormous compared to the tiny fields produced by electrons in the wires. If +q only differs from -q by a millionth of a percent, we ignore it. See Engineer's capacitor vs. Physicist's capacitor, a split metal ball, versus two separate balls.

For capacitors used in circuitry, if we dump some charge on one capacitor terminal, exactly half of it will seemingly migrate to the other terminal. Weird. But "physicist-style capacitors" with small, wide-spaced plates are different, and an extra electron on the wire will make +q not equal to -q.

In detail: if the capacitance across the plates is 10,000pF, and the capacitance to Earth of each wire and plate is 0.01 pF, then the opposite plate's charges will ignore any small +q and/or -q on the connecting wires. The attraction/repulsion of electrons in the wires doesn't significantly alter the enormous +q and -q on the inner side of the capacitor plates.

Engineers use real-world components: wide capacitor plates with very narrow gaps; gaps the thickness of insulating film. But if you were a physicist, your capacitors might be metal spheres with large gaps between, or metal disks where the space between the plates was large when compared to their diameter. (Or you'd draw a capacitor symbol where the gap between plates was enormous and easy to see.) In this case the attraction/repulsion of electrons on the connecting wires would have an effect on the balance of +q -q between capacitor plates.

Another weird concept: make a solid stack of thousands of disc capacitors: foil disk, dielectric disk, foil disk, etc. Use half-inch wide disks, and stack them up into a narrow foot-long rod. Now connect one end to 1,000 volts. The same kilovolt will appear on the other end! The rod is acting like a conductor. Yet its DC resistance is just about infinite. Series capacitors! Each little capacitor induces charge on the next and the next, all the way to the end.