I have been experimenting with simulating current limiting circuits. I am trying to limit current to ~500mA given a fixed 4.8V source. I have started using a circuit like the one found on this wikipedia page … 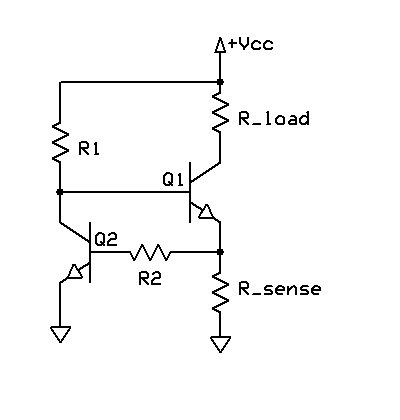 I have made a simulation of this circuit using CircuitLab. I show the results below. The circuit on the left uses a simple series resistor to do the current limiting while the circuit on the right is based on the Wikipedia circuit. I have tweaked the values of R_bias and R_load to common resistor values that prevent more than 480 mA being drawn from the source when the load is 0 Ohms. I also set hFE of the transistors to 65 to match some multimeter measurements I made of some power transistors that I have to hand. The values adjacent to the ammeters are the simulated values. 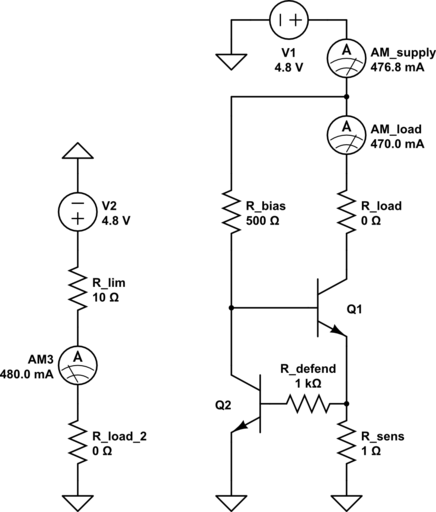 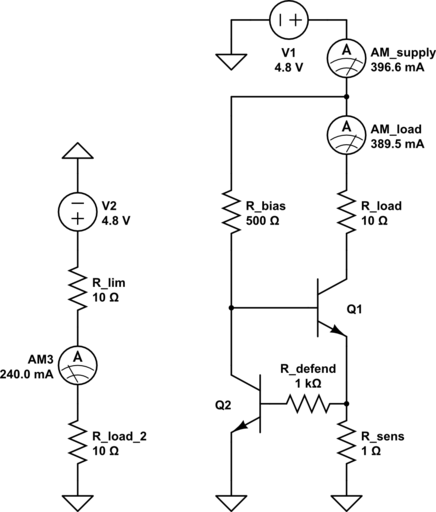 The circuit shown will work, but the transistor and Rsense create a voltage drop that must be taken into account.
What you are seeing is the effect of this:

At 480mA the voltage drop across the 10Ω resistor would be 4.8V, which leaves no "room" for the transistor saturation voltage or the Rsense voltage drops.
So the current will be (Vsupply - Qsat - Vrsense) / Rload. To fix this, raise the supply by a couple of volts and try the 0Ω and 10Ω tests again. Also, lower Rdefend considerably (<10Ω)
You should hopefully see (almost) no difference.

For better results, the more gain you have the better. Another thing to note is (as Dave mentions in his answer) that Rbias needs to have a higher limiting point than the Rsense setting, otherwise it will dominate. If the transistor has a gain of 65, and you want Rsense set for 500mA, then Rbias must be set to allow more than 500mA. At 500Ω, it will set the absolute limit at 65 * ((5V - 1.4V) / 500Ω) = 468mA, so even if Rsense were set for 500mA you won't get it. To avoid this set Rbias for e.g. 250Ω, or as mentioned below use a MOSFET for Q1 and then the value isn't as important (10kΩ will do)

Another option is to use a common opamp constant current circuit: 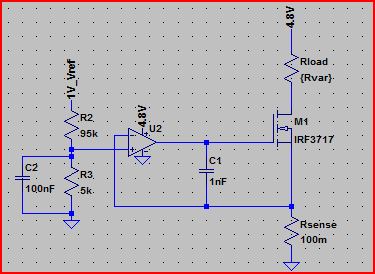 Simulation with a supply of 4.8V, current limited to 500mA, Rload swept from 1mΩ to 50Ω and current through it plotted relative to this (note current stays flat at 500mA whilst limited):

This meets your requirements of a solid 500mA limiting at 4.8V supply, and is easily adjustable by varying the opamp non-inverting via input voltage R2/R3 divider. The formula is V(opamp+) / Rsense = I(Rload) For example, the 1V reference is divided by 20 to provide 50mV at the opamp+ input, so 50mV / 100mΩ = 500mA.
A MOSFET is used to avoid base current errors complicating matters (a MOSFET with low Vth can also be used in the original transistor circuit to improve things)

An assumption need to be made which you may wish to clarify. If you want 20 mV at UP TO 100 mA then none of the circuits will work without both a current control and voltage control function. The following circuits deal with current control. These can be used to feed a standard 20 mV voltage regulator circuit. If Iload is < Icurrent_limit then the VR works as desired. If Iload tries to exceed current limit then VR is starved of current. So ...

Your circuit will work but is relatively low quality - it depends on the Vbe of Q2 being well defined - which it tends not be be.Steven says that the top transistor needs more than 20 mV Vbe, which is true BUT if you set the current of choice and IF the load drops 20 mV at that current then Q1 will assume whatever Vce is required to drop 20 mV across the load. 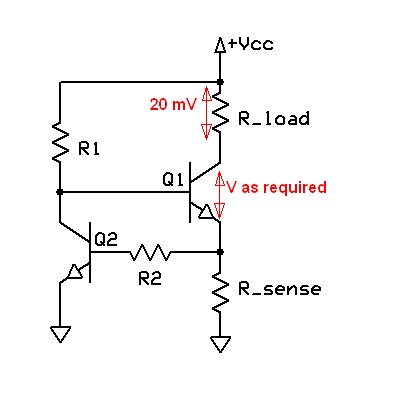 Much better are circuits similar to the one below from here.
I've modified this slightly but left their values in place as this is to give an idea only.
The system turns Q3 on until V_Rsense = Vref.
So I_constsnt-current = Vref/Rsense.
Vref can be divided from some input voltage as shown using a divide ratio to suit. . You can provide a variable voltage from a pot or a microcontroller etc if desired to vary the current. Note that this is a current sink with the load being supplied from some V+ of choice. Need not be the same V+ as Vcc = BPS+ 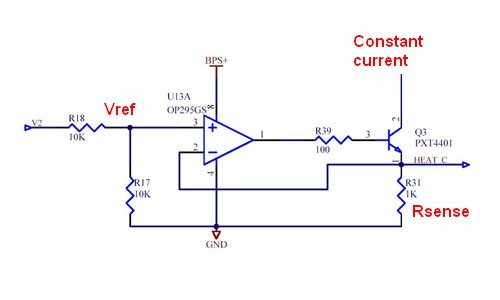 Similar but with MOSFET and uC drive

This is similar but uses the voltage across R1 to provide a high side current source. From here but he says it's copied from "The art of electronics". Note again that Vref is the HIGH side voltage across R1.
ie Icc = Vref / R2 = [V+ x R1/(R1+R3)] / R2 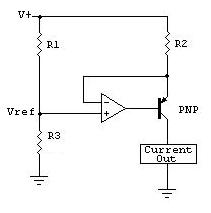 Some thoughts from Maxim from here.

Many related thoughts from all over

The original circuit is a "low-side" current sense. The first variant is a voltage source with a high-side current sense. The second variant is the same but is now adjustable (tweak trip current). The third variant replaces the two diodes with a transistor to make it a little more precise. All these circuits are not going to be very precise as the Vbe junction of any transistor is sloppy and changes a lot of temperature. The low side vs high side just depends on your application (maybe you don't have access to the high-side).

The three transistor version is going to be the most precise and give you adjustments to trim some error and tune the current trip level.