I have included as much information as possible, so it should just be a matter of pointing out something simple (hopefully).

I am trying to model a biasing circuit for a Common Collector BJT Amplifier. I am running a Transient Analysis on the circuit and am receiving the following simulation results (attached images), which I am having trouble interpreting. I have also listed my minimum specs for the circuit and my theoretically computed values. As far as I can tell, I am doing everything correctly, although I am not seeing how to choose the Collector Resistance since it does not appear in any of my equations. I am also not seeing the voltage gain nor the Q-point as computed by PSPICE in the simulation Output File. 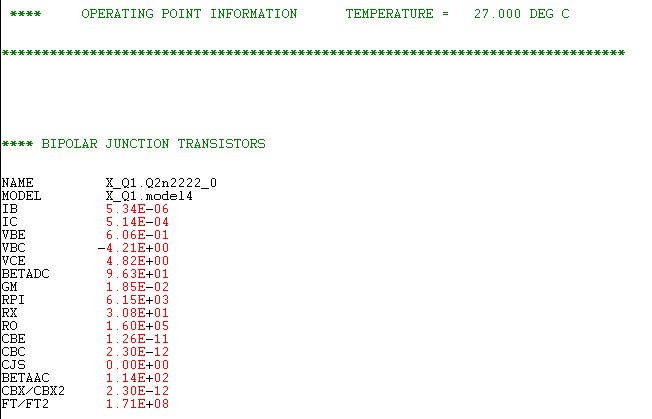 "Common Collector" means that the Collector is a common point for both input and output signals (ie. Ground, or a fixed voltage relative to it). In a true Common Collector circuit the value of RC is zero Ohms. Larger values will still work, but with reduced output voltage swing.

In your circuit the Emitter can only go up to slightly less than 9V, because RC is then dropping 1V so the transistor is saturated (approaching zero volts between Collector and Emitter). However since you only need 2Vpp output and the quiescent Emitter voltage is ~5V, this should not be a problem.