To me, ICs never have names that hint to their uses. For example, this AND gate from TI is named SN74LVC1G08. But that tells me nothing about what it does.

Is there a naming process for ICs? And if so what is it?

There isn't a global standard, or even a national standard as far as I know. (Maybe the Soviet Union had one?) Part numbers for ICs, passives, electromechanical components, and other stuff exist solely to provide a unique identifier for a product. That being said, there are a few things you can usually rely on in IC naming.

First, there are the standard logic devices that uint128_t mentioned. These are the 7400 series and the 4000 series. They date back to the 1960s, when you could only fit dozens of transistors on a chip. (Kind of limits how many different products you can sell.) There are many 7400 sub-families -- CMOS, lower power, higher speed, lower voltage, etc. The SN74LVC1G08 that you mentioned is in the 74LVC (Low-Voltage CMOS) sub-family. According to its datasheet, it's a single AND gate. A 7408 is a quad AND gate, so the 1G is TI making up their own variation on the numbering scheme. They're calling this product line "Little Logic" since the ICs come in very small packages. The SN on the front of the part number is how TI starts the part numbers for their standard logic.

Beyond standard logic, it's up to the manufacturer. Usually if two manufacturers make the same part number (or a very similar one), it will be a compatible product. This happens when large customers want to have more than one source for an IC ("dual-sourcing"). Also, part numbers can't be copyrighted, so you can probably clone a popular product if you want to. A lot of companies make 741 op amps and 317 voltage regulators, for instance.

Sometimes this is simpler than others. Here's a small subset from the LM117/317 family of parts:

You can see that they have different temperature ranges and certifications. The 117 series can handle tougher operating conditions for military and aerospace applications, while the 317 is more for consumer and industrial applications. LM meant National Semiconductor until they were bought by TI a couple years ago.

The TI microcontrollers I work on have a more complex numbering scheme. Here's how the part numbers break down for the TMS320F2806x series: 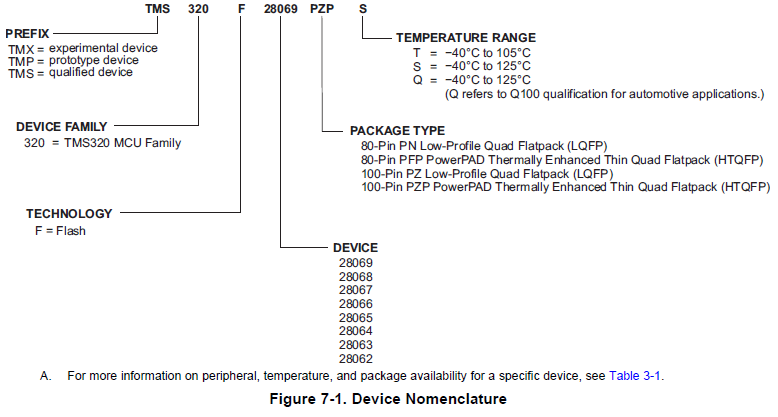 The different device numbers have different functionality available (and different prices). Here are some of those differences:

It isn't always this complicated. Some ICs have only a single variant. But usually there are at least a few different packages available.

It's best not to worry about the specifics of part numbers. Often they're more for the manufacturer's benefit than yours. When you're doing parametric searches on a site like DigiKey or browsing through the manufacturer's page, there's a lot more information to go on. The part number is just to make sure you order the right thing.