This question relates to this incident here, where a women in Australia died from a faulty USB charger that allowed the full 240V mains voltage through the USB cable.

Now from my understanding you would have to be connected to the mains ground or the earth's ground in order to get an electrical shock. Otherwise there wouldn't be a potential that would allow the current to flow through her.

Now according to the article which cites the police she received the shock because she was touching her phone which was connected to the charger and her laptop which was also connected to a charger, as well as her EARPHONES which bothers me the most, apparently she had burn marks on her chest where the laptop was and in her ears.
Unfortunately there are no details about the devices that were used. So I'm just assuming below.

Here the picture shown in the article explaining the connection: 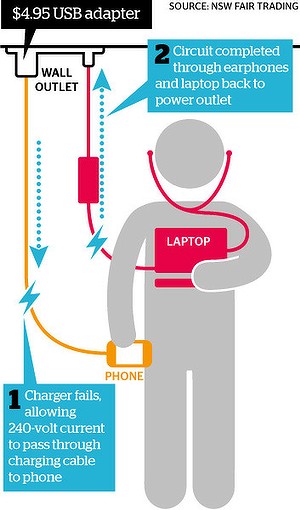 Now how would this be possible? The phone must have a metal body which is also somehow connected to the power of the phone. The only phone where I can imagine that being the case are the recent iPhone models where the outer aluminum ring on the side is apparently also acting as the antenna (here and here), maybe other aluminum unibody phones as well.
Still, is that even a feasible theory? Wouldn't a metal casing be connected to ground instead? How would a ground in a DC circuit act when suddenly the circuit "becomes" AC?

Then her laptop must have had an aluminum body as well which again must be connected to the ground. Again the only case where I heard about the laptop body be somewhat connected to the circuit is unibody MacBooks where users sometimes feel a tingle when touching the laptop while it is connected to the charger but is that even the case? Again it sounds weird that the laptop's body would be grounded: there is a low DC voltage coming in from the external charger so why would that be needed?

Then the headphones: WHY would the outer casing of a pair of earphones be connected to the ground in any way and how would electricity even flow through the two sides of the earphones (THROUGH her head to the other side), that sounds like a really unnecessary detour for the current.

If this indeed possible like described by the police would this also be possible by a phone and laptop with plastic bodies?

I would love to see a detailed answer: I'm not that well educated when it comes to mains AC power and safety measures taken to avoid shocks.

This was one of those crap Chinese-made Mains-to-USB chargers that can be purchased for as little as US$1.50.

I've taken them apart, and they are bad, criminally bad. The isolation from mains to output is not taken seriously- not enough creepage distance, and in one of the samples I examined, there was debris inside that could cause a direct short if you shook the charger just right.

She could have been touching the earphone plug while unplugging or plugging the earphones into the phone, and perhaps a grounded Ethernet port on an otherwise plastic computer. Once you're connected to the mains, any grounded bit of metal can be lethal. Perhaps the computer was metal and grounded.. most laptops these days have a grounded chassis so either the metal, trim, an exposed screw or anything like that would suffice. Whatever the current path, the muscle contractions probably caused her to grip the conductive bits more tightly rather than flinging them away, and sealed her fate.