I have been using and making LED flashlights for years now and I am VERY familiar with all of the circuitry and technology inside of them, but I just got my first LED house light bulb that runs off of 110v AC electricity. It is very similar to a flashlight – it has a large heatsink, and 1 or more LEDs inside of it (brand and specs of emitters, I do not know). The part that I am most curious about is how the electricity from the socket gets to the emitter. In a flashlight the power comes from a DC battery through a current regulator (LED driver) and into the LED itself. This is not difficult because the voltage of common LED emitters is about the same voltage as Lithium batteries (3.7v, 7.4v, etc) which makes the current limiting relatively simple coming from a one or two cell light.

How does this work for a high voltage AC bulb? Is there a transformer and rectifier inside of EVERY bulb (I sure hope not), or are the emitters manufactured to run off of 110v AC power and just use half of the wave cycle?

There are several circuits on the internet from noatable sources that show how LEDs can be powered directly from an AC supply without a transformer. Here's one from ON semi: -

And here is the document it came from. The document is entitled "High Current LED - capacitive drop drive application note".

Here is another interesting article, this time from EDN. It shows the following diagram, again transformerless: - 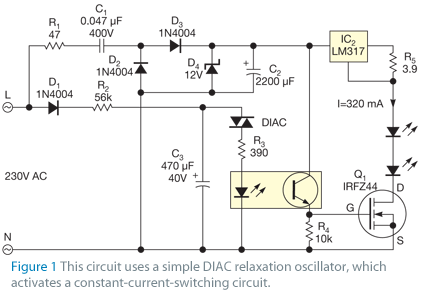 And another article and circuit here: - 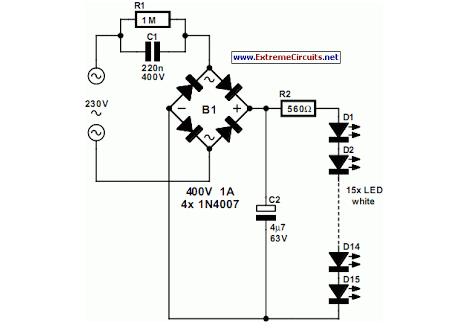 There are two possibilities the switch is inserted: 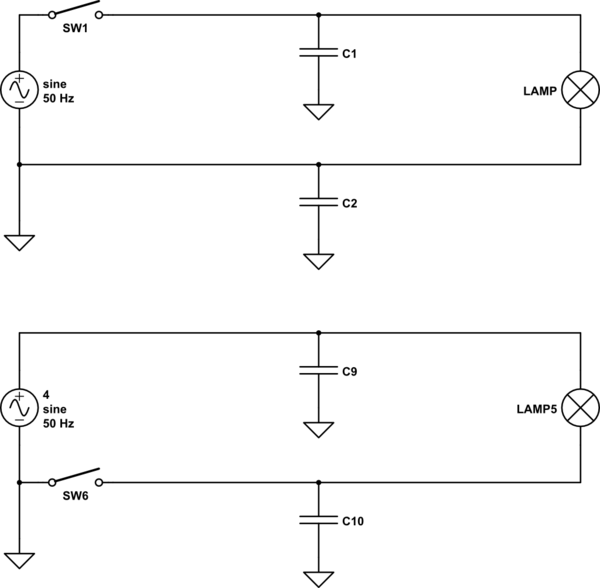 The capacitors shown in the circuit are the capacities the (more or less) long lines form to GND.

If the 2nd circuit is what you have the lamp always is connected to alternating voltage. In that case there is a possibility of some very low alternating current flowing via C10 to GND even if the switch is open.

You can find out if your configuration is the 2nd circuit by testing with a one-contact neon test light. It is the case if the test light lights up when touching one of the two connections in your lamp socket even if the switch is turned off.

Apart from what Brian says, which may very valid in some cases, there are also other options for why this happens:

A pilot light is connected like this, for reference: 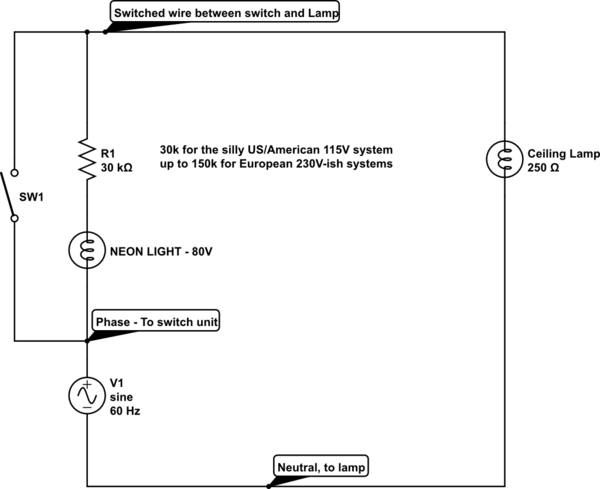 With an incandescent lamp, when the switch is open, you can see that the 250 Ohm of the lamp does not add much to the 30kOhm already in the loop, so the neon light will turn on, and only 1 to 2mA will go through your ceiling light, which will not turn it on at all, won't even get warm, as across the 250 Ohm it presents 2mA is only 0.5V, way too little for a 115V lamp to turn on.

Now a leaking Triac will also be in the range of 2mA to 10mA, so will most capacitive coupling. Creep (before other paths will trigger earth faults that should cause a power shut off) usually stays under 50mA. All of those current are much too low to cause any noticeable effect in the wire of the incandescent.

But what happens when that current goes through a LED bulb? Well, a modern CFL or LED bulb usually has very low, to nearly zero internal leakage, so then the internal circuitry can be seen as this (they are much more complicated if well designed, but for this purpose, this is the representation):

When you have a hard switch, all is well, switch on: Light on. Switch off, light off.

Now, what happens if you have something "pumping 5mA" into the lamp continuously? 5mA is still not enough to power the LED, right, so... That should not turn it on at all, 5mA is only 500mW, and your LED bulb is, let's say 10W, so the maths is clear.

Well, because there is no leakage, the 5mA will just charge the capacitor. If we assume the current to be perfectly constant (not entirely true, but close enough), it will charge up over time like this:

dV = (dt * I) / C with C = capacity of the capacitor, I is the constant current, and dt is the time period, and dV is the change in voltage.

Depending on the size of the capacitor and the turn-on and turn-off voltages of the controller, the flickering can be quick, slow, or even so quick that it looks like an always-on bulb that flickers in brightness.

These flickering speeds also get influenced by the number of bulbs connected.

Funny thing is, that based on the flickering pattern of 3 or more lamps connected to one system it is possible to make some assumptions about what might be the cause. While no guarantee, it has some basis in analysis that is valid.

As a side note: If the flickering is a real "fluid" flickering in an on-state it may be that the LED controller leaks the current through into the LEDs without actually turning on and the flickering is caused by much smaller on/off margins and inferring anything from a pattern is much harder.

Will this energy also leak away if there are incandescents? Yes! As I showed you above, the current flows, you just don't see it. So in a way with the LED lights you're already winning, if you can get past the flicker annoyance, because now at least the leakage is doing something for you.

The reason the flickering stops when you add only one incandescent is basically also already answered: If you add the low-resistance lamp in the loop, the leakage will only cause up to a few volts maximum on the wires, which is way too little for the High-Voltage LED driver to turn on, or to leak into the LEDs themselves.